When square footage is tight, finding space for a home office presents serious challenges. The answer: Instead of limiting rooms to a single use, build in adaptability. These case studies show how one room can double as work headquarters and comfortable hangout.

Problem: When a Beacon Hill couple wanted to convert their billiards room into a functional office and playspace for their three children, aged 10 to 13, local designer Heather Wells’s biggest obstacle was the room’s long and narrow dimensions, measuring 480 square feet.

Solution: Wells designed the room around two key pieces: a custom built-in cabinet that serves as a computer station and a 4-by-8-foot antique ebony table around which everyone could gather. “We needed a table that filled the space but still felt like a desk,” Wells explains. She created additional sitting areas with comfortable club chairs that can be moved as needed.

Details: With a huge skylight and a window overlooking the hustle and bustle of Beacon Hill, the office has an unusual amount of daylight for a city dwelling.

In the evening, custom pendant lights and Galerie des Lampes sconces fill the room with ambient and direct lighting. Both the homeowners and Wells love the way the lamps brighten the room’s original green-gold walls. (“It’s a very sophisticated and cheery color,” Wells says.)

Wells upholstered the desk chairs with mismatched colors, designated his and hers. She covered the cozy club chairs in navy cashmere, and an ottoman in pony hide (which is actually cowhide, known for its durability and perfect for an active household) from Edelman Leather. “You can put your feet on it, or drop a peanut butter and jelly sandwich on it—dirt comes right off,” says Wells.

To give the office an old-world feel, Wells layered rugs on top of each other. “You see the look in old libraries in England and France,” she explains. The first layer, a large sisal mat from Stark Carpets at the Boston Design Center, is partially covered by an Oriental rug from ABC Carpet & Home in New York; a vintage zebra throw adds zing.

While the kids tend to their homework at the center table, their parents can read in the sitting area or surf the Internet at the computer station. “The whole room is really spacious and has beautiful light,” says Wells. “You can really spread out on the center table or hang out in the other spaces.” 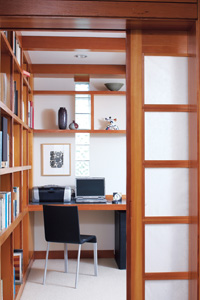 Problem: Originally designed by well-known Cape modernist Charles Zehnder, this 1982 Provincetown home’s odd angles made the 100-square-foot side porch awkward and practically unusable. It did have one thing going for it, though: It had “one of the more gorgeous views in Provincetown,” says architect Tom Huth of Huth Architects in Newton. Asked by the owners, both scientists at MIT, to enclose the space and tie it into the main house better, Huth designed smart built-ins and Japanese-inspired details.

Solution: The original architecture was highly idiosyncratic, with walls meeting at acute angles, rendering some of the interior useless. For his tiny addition, Huth couldn’t afford to repeat that approach, but he did want to come up with a plan based on geometric principles. In the spirit of the original architecture, Huth used a grid to locate the walls. Then he laid a second grid over his plan and turned it 45 degrees. This shift, Huth says, determined the direction of the bay window and the ceiling’s beam structure. “The house is so strongly geometric that my solution had to be based in geometry,” he explains.

Details: Huth created a Japanese-inspired study using copious amounts of cedar, a durable, aromatic material prominent throughout the original house. Because space was precious, he had local carpentry firm Cape Associates integrate the desk and bookshelves into the new wall. “It’s like a little jewel box,” says Huth. “There’s a place for everything.”

A floor-to-ceiling shoji screen divides the office from the main house, allowing people to work quietly without feeling completely cut off. A wide, prow-like window accentuates the spectacular ocean view. “The window pops out in the corner of the room on a diagonal, so it directs your eye right at this view of the water,” says Huth.

Aware that the sweeping vistas might distract even the most focused worker, Huth avoided building the desk directly beneath the window. Now all the homeowners need do for some inspiration (or distraction) is swivel their chairs and gaze out at constantly changing landscape. “You can really close yourself off in this contemplative, small space,” Huth says. “The room is Zenlike.” 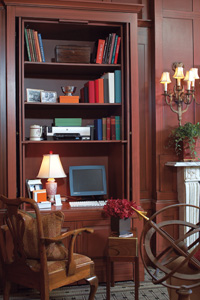 Problem: Several years ago, the owners of this traditional Commonwealth Avenue home—who entertain often and have three children—commissioned Maribeth Brostowski and Polly Lewis of Lewis Interiors to design a room open to adaptation. The quiet office by day would become a family room at night. “When you live in the city, you can’t dedicate one space to a specific task,” says Brostowski.

Solution: Here again, built-ins were the key to flexibility. The designers retrofitted existing shelving to accommodate a cleverly hinged desk that stows away when the couple are entertaining or when the children—now ages three, six, and eight—need space to play. Brostowski and Lewis used materials similar in tone to the original décor, creating a traditional-feeling parlor that looks great, even when unbuttoned.

Details: Brostowki and Lewis painted the wall to appear like wood without the expense of actual millwork. The carpet was designed by Stark, and the sectional was covered in Manuel Canovas fabric.

As the couple’s oldest child reached school age, the family began to outgrow the room’s dimensions, so Lewis Interiors was called in again to create yet another multifunction room, this time in the eating area.

Once more, they designed a wood built-in to house a computer and printer, a sorting space where the owners could organize mail and bills, and a nook to collect all the detritus from a busy family. “This second desk area became another place where everyone can gather,” says Brostowski. Setting up a desk in the kitchen also ensured that the couple, while preparing meals, could monitor their kids’ online activity.

Thanks to this additional cabinet, Brotowski says, “the kitchen really became the heart of the house,” allowing the original office to return to its pre-kid function as a sitting room.