Bringing It All Home

David Hornstein knows a thing or two about construction. Before he founded his home design firm Light House Design, before he had 350 projects under his belt, Hornstein was a carpenter. So it was with a seasoned eye that he turned his attention to building his own home…

David Hornstein knows a thing or two about construction. Before he founded his home design firm Light House Design, before he had 350 projects under his belt, Hornstein was a carpenter. So it was with a seasoned eye that he turned his attention to building his own home.

[sidebar]But new construction wasn’t part of the original plan when Hornstein and his wife, Joanie, bought an early-’60s house in Lincoln on a quiet, dead-end road two years ago. They liked the modern house for its simple details—like flush detailing and spare moldings—but soon felt hemmed in by its cramped rooms and dark interior. After considering a radical remodel, Hornstein saw the chance to start from scratch.

The problem was keeping this very demanding client happy. “It was very difficult to grapple with all the design issues by myself. In any other job, a client or architect would have dictated how the building should look.” This time, however, Hornstein could make his own rules. 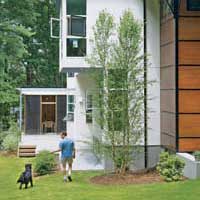 Studying his 2-acre sloped lot, Hornstein decided that his new house should cascade along the landscape and be angled toward the sun; he also wanted the garage tucked under the house. For its final appearance, Hornstein turned to the small, angular houses built in the ’50s that abound in bucolic Lincoln, many of them inspired by Bauhaus masters Marcel Breuer and Walter Gropius, who once lived nearby. Hornstein’s house mixes this simple, boxy aesthetic with contemporary construction techniques. To get a seamless appearance on the exterior walls, for example, he ordered 4-by-12 foot plywood panels from a fabricator in Washington state and fastened them to the house’s wood frame. Hornstein hid all the joints between these panels with aluminum strips, then painted everything white. 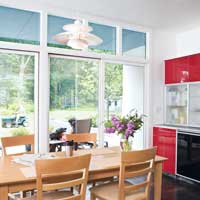 Because the family lived in the old house while the new one was going up just a few feet away, Hornstein could study all the moods of the place, using the light and the land to direct where openings would go. He put oversize windows where he wanted splashes of light or views, and tried to avoid using shiny or polished materials. 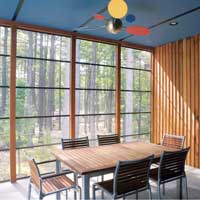 A lover of texture, Hornstein used dyes and stains on the interior woods, rather than paint. Even the Spanish porcelain tiles throughout the first level are finished with a dull metallic veneer to play up their textural variations. In the master bath, elongated porcelain tiles are embossed with a faux wood grain; one expects them to be warm to the touch, like teak. Here a Jacuzzi sits under a twinkling fiber-optic sky. 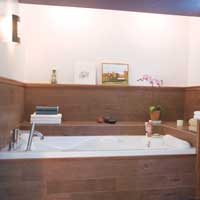 For more-subtle light inside, Hornstein strategically employed translucent glazing. Purple-tinted transom windows set the first-floor hallways aglow, while inset into a master bedroom wall is a shoji screen that sections off the dressing room without canceling out natural light. The garage doors are also translucent and made to appear like screens.

The overall feel of the house is clutter-free but not stark; the Hornstein’s furniture is comfortable, functional, and consistent with the materiality of the house. (Like other elements, Hornstein built the dining room table himself.) The house also blends in well with the neighboring modernist homes in size and scale. 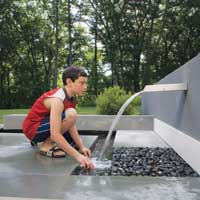 Inside it exudes a bright, unfussy attitude and, since being completed last year, has become the hallmark of Hornstein’s work. Potential clients are often most impressed by the open floor plan—a layout that heightens the site’s natural beauty. They walk the hallways, sit on the decks, and take in the afternoon sun to the sound of running water, a simple trough and fountain Hornstein’s final nod to Japanese design.