Pleasure in the Details

Stepping into designer Heidi Pribell’s Cambridge home is like walking into a dream created by a quixotic mind. Her style, call it Baroque-contemporary, is characterized by a sophisticated palette of colors—the swirls and patterns inspired by an earlier time. Pribell has filled the 1,000-square-foot condo she shares with her husband, Paul Downey, with antiques (she began as a dealer), especially from the decorative arts periods of the late 19th century…

Stepping into designer Heidi Pribell’s Cambridge home is like walking into a dream created by a quixotic mind. Her style, call it Baroque-contemporary, is characterized by a sophisticated palette of colors—the swirls and patterns inspired by an earlier time. Pribell has filled the 1,000-square-foot condo she shares with her husband, Paul Downey, with antiques (she began as a dealer), especially from the decorative arts periods of the late 19th century.

Growing up asthmatic in a ranch house in Florida, she whiled away the hours indoors studying the minute details in animals and plants. She concluded, “Look to nature for everything.” Her designs draw from the Victorian and Edwardian eras, which borrowed heavily from nature. Silversmiths shaped sunflowers and chrysanthemums into their coffeepots and serving pieces. Walls bloomed with wildflowers and vines, and textiles were covered with images of leaves, animals, and arabesque patterns. 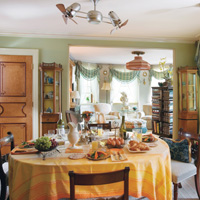 In Pribell’s own home, Japonesque koi swirl over the wallpaper; a bonsai tree, its leaves made of amethyst, sits on an intricately carved chest; and highly stylized vines climb the drapes in her bedroom. Any of the pieces on their own would be interesting, but together, they are passionate. It’s like the children’s book Where the Wild Things Are, when Max’s room is transformed into a forest. Suddenly the furniture disappears and all you see is loveliness.

“When I first started as a designer, I used to pair renaissance Italian furniture with sleek Italian modern furniture,” Pribell says. “But at some point, I became upset by the apparent randomness of my decisions. I was saying, ‘I like it because it feels good.’ Everything was ‘Oh, it’s so chic.’ I have very good friends who still say that all the time, and I worry.” 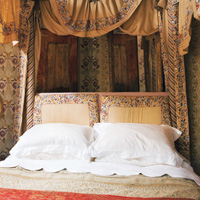 So she set about learning everything she could about the pieces she loves. An intellectual (she graduated from Harvard College in 1982), Pribell periodically jumps up to reference a book from her impressive library. At one point, she returns with a tome published jointly by Rizzoli and the Metropolitan Museum of Art. “This book cost me $130, but when I bought it the dealer said, ‘You’re going to make a lot of money off that book.’” He was right. “I was at an auction of arts and crafts pottery. I turned one charger over—I’d assumed it was British, but it was signed John Bennett and had a New York address. I was floored—this was American? I bought the charger but couldn’t find the artist’s name referenced anywhere. Then I picked up this book and there was an entire chapter on Bennett’s work. There were only 12 known pieces by him in the world. I sold the charger to the Art Institute of Chicago for $38,000!”

Pribell lives in a world where form and color speak with great clarity, but her vision makes some people uncomfortable. Several years ago she was invited to design a room in the Daniel Webster Estate in Marshfield as a show house. She was the second designer to try—the first had given up in frustration. “The existing wallpaper was very bleak. It made the room feel like a mausoleum.” 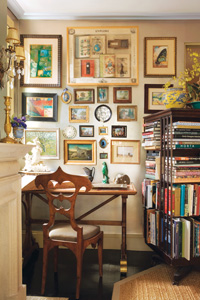 She speaks breathlessly about the fabrics, colors, and textures she used to create an entirely new effect. “I painted the ceiling apricot. It glowed. Then on the windows I did an Empire window treatment with lace curtains backed by a cerulean and copper metallic linen, and a turquoise blue fabric as well, all intertwined. I designed chairs inspired by 19th-century Turkish upholstered furniture, very clubby. People would walk in and say, ‘Wow, what goes on in your mind?’ No one knew how to experience it. Traditional Home magazine shot every room in the house but mine because it was ‘way out there, arty, beyond our readership.’”

So perhaps her aesthetic is over the top for traditionalists, but Pribell’s growing client list tells a very different story. It seems that many Bostonians are embracing what she calls her “fresh modern twist to classic design.” And working with this erudite, energetic designer is a refreshing change from the typical color-wheel-toting decorator. Then again, maybe, just maybe, after suffering through years of faddish minimalism, what people really hunger for is informed sensuality, which Pribell offers in spades.