The story of Tucker Taft’s Lexington home begins not in New England but outside Cleveland, on a road called Pepper Ridge. Designed in the ’60s by Robert A. Little, a noted modernist who studied at Harvard with Marcel Breuer and Walter Gropius (the founder of the influential Bauhaus school of design), Pepper Ridge was one of the country’s first planned streets of modern houses. Taft grew up there with his good friend and neighbor, Patrick Calhoun Hickox.

In the ensuing 30 years, both boys moved east for school and settled in the Boston area, Taft working in software development, Hickox in architecture. In 1989, Taft and his wife, Phyllis Yale, visited an open house in a Lexington modernist outpost. Nestled into a hillside on a meandering road, the home reminded Taft of his boyhood. “I took one look at the living room and fell in love,” he recalls. This was no accident. The Lexington community had been designed by young architects working in the Architects’ Collaborative (TAC), Gropius’s Cambridge-based firm. Ardent Bauhaus followers with miniscule bank accounts, TAC architects had built their homes small and spare.

Since then, nearly all the modest buildings have been expanded, and the 1949 house that Taft and Yale would purchase was no exception. In fact, only the living room was intact; the rest of the house had been added to or renovated by previous owners. Still, the house needed lots of work, and Taft knew who would understand this unique architecture best: his boyhood friend Hickox.

In the first series of renovations, Hickox expanded each of the bedrooms, widened the cramped hallway, redid the kitchen, and built a basement-level playroom, adding space by cantilevering the north side of the house out over its original bearing wall. Another major change was a side entrance that would service the core of the house. “Before, there was only the front door,” recalls Hickox. “Now it’s like every American home—you come in through the side.” The family moved in, and daughters Maia and Rebecca hung artwork and posters along the corkboard-clad hallway outside their rooms.

After seven years, Taft thought to ask his wife whether it was her dream home, as it was for him. Yale unexpectedly said no—she felt its modernism was chilly and off-putting. And so began the second phase of renovations, christened the “cozy agenda.” Completed in stages over the next nine years, the plan yielded a warmer home, full of finely crafted woodwork laid out to offer multilayered views through the house and into the surrounding gardens. 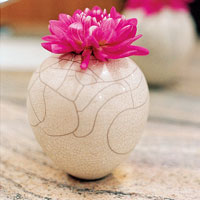 During the second renovation, Hickox worked hard to retain the spirit of the original TAC house while enhancing the scale, shape, and materiality of the earlier design. He kept the unadorned front door and the equally simple vestibule, glass-fronted and wood-lined. Up a few stairs to the left remain the girls’ bedroom corridor and bathroom. Straight ahead is the original TAC living room that captured Taft’s heart, with its brick fireplace and a wall of glass that looks onto a bluestone patio accented by a magnificent sugar maple. But just beyond the living room, one can glimpse the new open, modern kitchen and fantastic family room.

Ideal for serious multitaskers, the kitchen features custom cabinetry and capacious storage. Along the large central island, a partial-height wall of open shelves separates the kitchen from the main passageway. Nearby, a washer and dryer stand ready, tucked discreetly behind cabinet doors, and a beverage fridge is handy for those long folding sessions.

The new family room beyond the kitchen interweaves floor-to-ceiling windows with bookshelves (which the family takes advantage of) and custom cabinets made with natural materials. And in the middle of it all, the ceiling held back as if to let it pass, is the antithesis of modernity: a hand-built fieldstone fireplace that just about steals the show. “It’s the best $30,000 investment I’ve ever seen a homeowner make,” says Hickox with admiration.

Another important part of the second renovation was the addition of a master suite to the right of the main entrance. The bedroom is memorable, with its angled ceiling (an extension of the original butterfly roof) and exquisitely crafted millwork. An unbroken expanse of frameless glass topped with a run of transom windows affords views of the courtyard and surrounding woods, and gives the high-ceilinged room distinctive warmth. Because Taft often leaves the house at dawn (he’s a dedicated marathon runner) and Yale wakes easily, Hickox designed a narrow L-shaped dressing room behind the bedroom that links to the bathroom, which has an unusual granite-clad shower. Now Taft can leave the bedroom, shower, dress, and exit the suite without ever disturbing his wife. 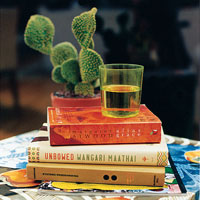 Throughout the home, Hickox’s additions create a series of new courtyards that offer views across green spaces to other parts of the house, so the family always feels connected to both the land and the architecture. Designed by landscape architect Douglas Reed of Reed Hilderbrand, the grounds play with the natural and the manmade. At night the glassy house glows in the woods like a jewel box; it sits happily in its verdant surroundings by day. Taft and (importantly) Yale now both live in their dream house. “We’ll never be able to move,” says Yale with a laugh. “It’s built just for us.” 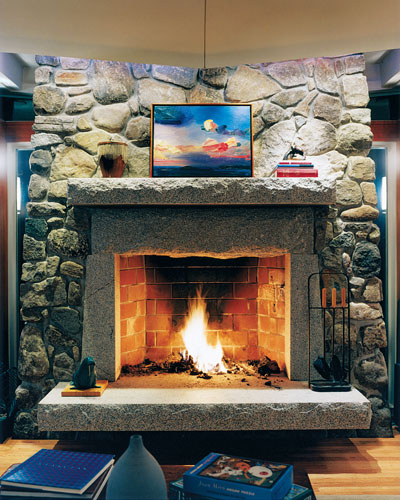 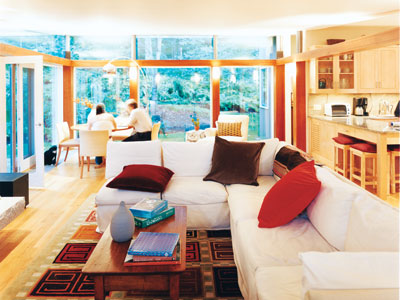 Taft and his daughter Maia linger over lunch next to the floor-to-ceiling windows. 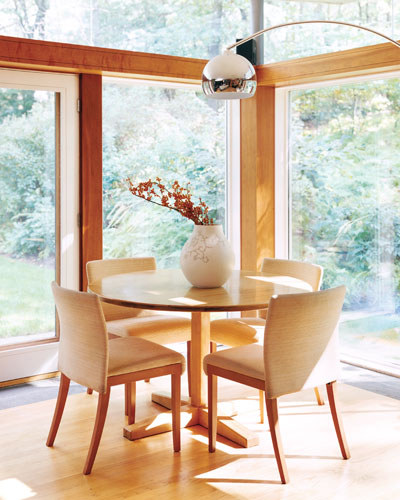 An informal dining area sits in a corner bathed in afternoon light. A door leads to the patio and the lush fern garden. 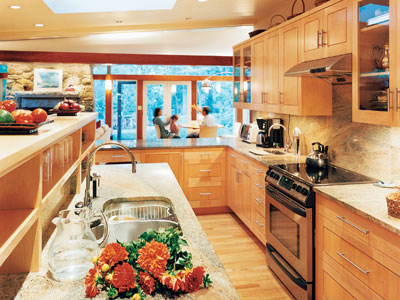 The thoroughly modern kitchen is decked out with the same granite used in the master bath; it picks up the hues of the family room fireplace. 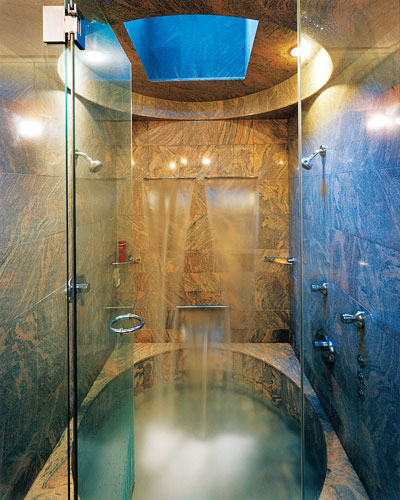 The master bath boasts a combined shower and whirlpool that
features a unique waterfall effect and a skylight. 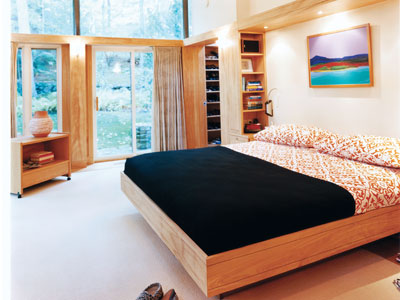