After two decades of home renovation, a Cambridge couple tackles the final frontier: the attic.

Outside a Harvard Square Victorian, a towering beech tree is etched with the names of the owners’ daughters. Inside, the home is also indelibly marked. Twenty years after the couple—both Harvard-affiliated biologists—bought it, nearly every inch, except the attic, had been completely renovated.

So when their younger daughter entered high school and sought a place to entertain friends, the cramped, cluttered third-floor space didn’t immediately stand out.

“At first we toyed with the idea of redoing the basement as a retreat for the teenagers,” the wife explains. A grim assessment by structural engineers led the couple to reconsider their plan. “We also had an attic. So we thought, How about up? Let’s go up!” With the help of their longtime architect, Alan Joslin; interior designer Andra Birkerts; and contractor Matthew Fischer, up and away they went, creating a main entertainment room and a small study. 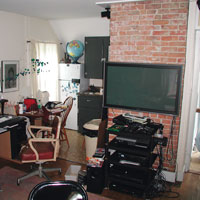 Before: A “multipurpose” room with too many purposes, the attic space felt chaotic. An unused kitchenette (leftover from the attic’s days as a separate rental apartment) took up space and served no function.

After: The dramatic media cabinet clarifies the main room’s function. “The TV itself doesn’t have much presence,” says Joslin. “We wanted to develop something that was monumental.” 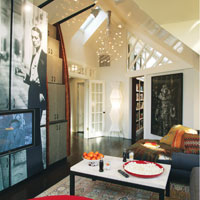 The cabinet features a reproduction of one of the wife’s favorite photographs, an iconic Helmut Newton advertisement for Yves Saint Laurent. She and Joslin pored over hundreds of pictures before committing to it. The only problem? She couldn’t locate a good copy of the shot. Luckily, her younger daughter’s best friend—now a student at New York’s Parsons School of Design—combed through her personal collection of fashion books to find it.

Cambridge-based Typo Tech (now part of Benjamin Franklin Smith Printers in Boston) created a supersize replica for $600. Fischer then spraymounted it onto the media cabinet and took a sander to the side cupboards’ Formica to create a pebbled effect. Motorcycle headlights serve as spotlights. 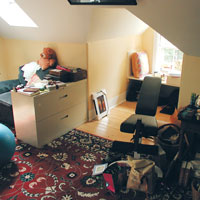 Before: The steeply sloping ceiling left a no man’s land of trapped space.

After: Joslin and Fischer raised the ceiling 5 feet but maintained its natural angles. Birkerts used glossy white paint (Benjamin Moore 214870) and Fabby Lighting wall sconces (“very reasonably priced, and I liked the baked finish,” she says) to play up the space’s structural drama. 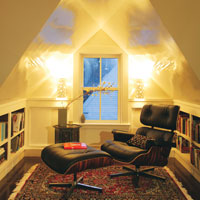 “When we mentioned glossy paint, the painters said, ‘You must be crazy’—but it worked really well,” says the wife. “It made the ceiling dynamic and lively, as opposed to a black hole that swallowed light.” Birkerts, however, recommends proceeding with caution when using a non-matte finish: “It’s a dangerous thing to do,” she says with a laugh, noting that shine accentuates bumps and imperfections.

Go on to the next page for more photos… 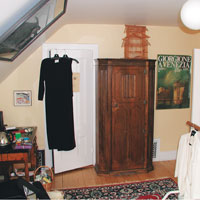 Before: Piecemeal furniture and insufficient shelving (plus an abandoned ballet barre) did nothing to help the small, overwhelmed study.

After: The mirrored panel above the bookshelves not only hides the home’s heating and ventilation systems, it also reflects and completes the triangular window pattern, and makes the tiny space appear larger. 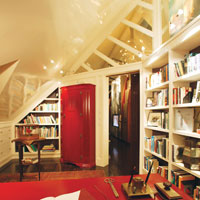 Joslin added built-in bookshelves (“Alan’s mission in life has been to contain my clutter,” says the wife) and Birkerts resuscitated the desk—actually a dining room table purchased in 1971—with red paint. Joslin “really wanted me to get rid of both the table and the armoire because they didn’t fit—they were both dark, heavily grained, and sort of 1970s in affect,” the wife explains, “but I was sentimentally attached.”