Newport-based architect James Estes and his wife, graphic designer Darcy Magratten, knew what they wanted when they began their search for a lot on which to build a home. It had to be affordable and secluded, with a southern exposure and enough land for their chickens, bees, dog, and ducks. After looking for over a year, they found 4 acres on a former commercial flower-growing complex that had the remains of an enormous greenhouse.

Abandoned since the early ’50s, the site was a jungle of glass shards, rusting metal, and brush. “It was a mess. It was like 50 years of Jumanji,” says Magratten. “For decades, kids had hung out and camped there; the trees had grown up through the greenhouse and just taken over.” The greenhouse was all but destroyed, leaving some 16,000 square feet of broken glass scattered around the site, so much so that “the backyard glittered,” says Magratten. “We hired a kid to play Rambo for a week and hack a trail through the jungle to see what was there.” 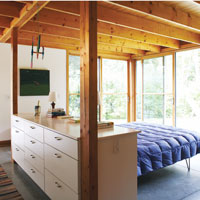 It turned out the land was just what Estes and Magratten were looking for. “Because it was sort of scary, and no one else would touch it, it was actually affordable,” says Estes. “We could see through it—we knew it had incredible possibilities. The greenhouse became our backyard.” The land had a pond, a small swath of wetland, lawns, and thick woods that offered them much sought-after privacy. Estes placed the house at one corner of the property, so that much of the building would be opened up to the outdoors.

Small and inexpensive—2,200 square feet plus an 800-square-foot office at a cost of $135 per square foot 10 years ago—Estes’s L-shaped design shows how beautifully the landscape and history of a place can shape a home. The house, with its grand sliding glass doors and ample clerestory, is a reflection of nature. The cladding, pine board, and corrugated metal recalls the site’s agricultural and industrial past. Even the remains of the former complex sit like sculpture on the landscape. “We removed the majority of the rubble but found the boiler and skeletal greenhouse remains beautiful. We left them as a folly in the landscape,” Estes says. 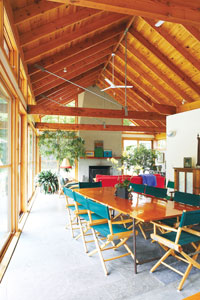 The house is composed of two wings connected by a breezeway covered by translucent fiberglass. In one wing are the main living spaces and bedrooms. To keep the area open, Estes fit the living room, dining room, and kitchen in a single 38-by-21-foot space under an exposed rafter and pine tongue-in-groove ceiling. Floor-to-ceiling windows look south onto the sweeping lawn. On warm days, 16 feet of glass doors slide open, allowing the three resident chickens, Sisyphus, Lucinda, and Camus, to wander in and out. “The chickens spend a lot of time staring into my wife’s studio and stealing the dog’s bones,” says Estes, who collects the hen’s eggs and gives them away or trades them for fish with the local anglers. Magratten calls the eggs “Jamestown wampum.” 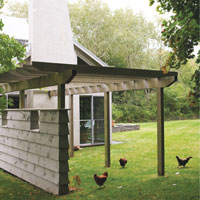 Contributing to the house’s studied informality, a simple open pergola welcomes the visitor into a space more mudroom than ceremonial entry, with plenty of shelves for shoes, hats, and gloves, and closets made of painted particleboard. A 10-foot-wide bluestone sidewalk continues inside, running through the width of the house and out the other side onto the south-facing terrace. Estes wanted this bluestone to “visually tie the indoors and outdoors together”; he chose the stone for its durability and because it weathers well. The remaining floors of the first level are made from simple poured and polished concrete. 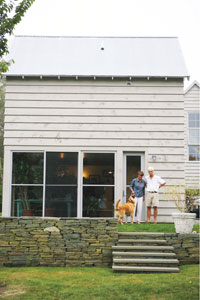 At the southeast corner, the master bedroom, inspired by the sleeping porches of Jamestown’s original cottages, features 12 feet of glass doors that slide back to let in the night sounds, including the bell buoys from the bay. Above the master bedroom rises a three-story tower, featuring a 12-by-20-foot bedroom on the third floor for their daughter, Cotton, now 22, and Estes’s study on the second. “The tower contrasts with the long horizontal of the main house. It was a way to get privacy for Cotton without using doors,” says Estes.

The east-facing wing houses the garage, Magratten’s graphic design studio (her firm, Darcy Magratten Design, focuses on book design), and a small guest room on the second floor. The glazed corners of Magratten’s office look across her large vegetable and flower garden to the remains of the greenhouse. While a few neighboring rooflines are visible in winter, the scene is framed by mature trees on all sides. 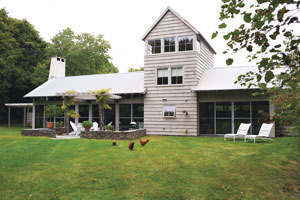 “The house is not small in scale, and I’m not much of a housekeeper,” says Magratten. “But I love that you can just walk right outdoors from anywhere in the house. Because we’re on the edge of the woods, there are always a lot of creatures out there—deer, mink, coyotes, hawks, and a tremendous bird population. It’s great to be a part of it all the time.”

The house is sheathed in gray clapboards—1-by-12-inch locally harvested standard pine—and the roof is corrugated metal. Jamestown is a short trip from Newport, where Estes and his partner, Peter Twombly, whom he met 20 years ago while studying at RISD, have their architectural practice in an old church. They design homes along Narragansett Bay based not on the Newport grand mansion model, but on the more informal and agrarian spirit of Jamestown Island, much like this lovely, simple house on the edge of a wood.