Ever try to make a fire outdoors on a wet, windy day? Without a lighter or a match, you’re relegated to the caveman approach: rubbing sticks together. So while fire may be elemental, creating it “at the flick of a Bic” isn’t easy without, well, a Bic. In fact, it wasn’t until the early 19th century, a time when firing up gas lamps and coal stoves was a daily imperative, that anyone found a way to get a reliable flame. In 1823, German chemist Johann Wolfgang Döbereiner discovered that exposing platinum to hydrogen generated intense heat. He harnessed this principle in his “Döbereiner’s lamp,” a bulky, ornate “lighting machine” suitable for igniting his morning fire. One drawback: It contained sulfuric acid—not exactly child-friendly. Still, the lighter was a huge hit—that is, until the match debuted in 1855.

Though its popularity dwindled as the match enjoyed a heyday, the lighter refused to flame out. In 1913, Americans Louis Aronson and Alexander Harris made the first pocket lighter, called the Wonderlite. The first handheld Ronson debuted in 1926 and the first Zippo in 1932 soon followed, ensuring that smokers with attitude would never have to fumble with a match.

Then, as smoking became the hallmark of golden-age Hollywood glamour, lighters came back with a vengeance. In fact, “a whole episode of I Love Lucy centers around a Zippo table lighter,” notes Pat Grandy, marketing communications manager at Zippo. One of the first examples of product placement? 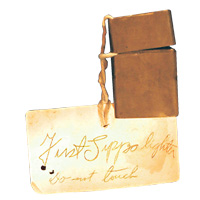 The Bic disposable lighter debuted in the 1970s. Arguably an icon of modern design—Bics are housed in the permanent collections of New York’s MoMA and Paris’s Centre Pompidou—the throwaway lighter has illuminated countless stadiums during rock anthems.

Despite the decline in smoking, lighters blaze on. Grandy says there are more than 15 Zippo clubs worldwide, with some collectors boasting more than 2,000 lighters. Apparently, the appeal isn’t even limited to humans. Legend has it that back in the 1950s, a fish was caught with a Zippo in its stomach. When the lighter was removed, it ignited on the very first try.