There’s a lot going on inside Don Carney and John Ross’s Cambridge apartment, which sports what Ross terms a “granny butch” look. “If Grandma had a bachelor pad, this is what it would look like,” he says, referencing his home’s earth-toned collection of figurines, pottery, and crocheted pillows.

Fully appreciating the sensibility requires looking beyond individual pieces like the necklace-draped, papier-mâché mannequin head sitting on the mantel.

“If you checked any of these items out by themselves, they might be kitschy or goofy,” says Ross, pointing to a patterned frock–clad statuette peeking out from behind a sculpted clay mushroom figurine. “But together, it all just works so well.” 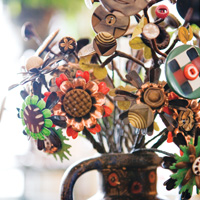 Carney and Ross, owners of Patch NYC, a jewelry and home accessories business, have been combining an old-world style with contemporary design since they started their company in Manhattan in 1997. Their first collection—six hats—was inspired by a wool topper crocheted by Ross’s mother.

After shopping their products to retailers, they added a line of scarves; two seasons later, they blindly sent what Carney calls “a primitive packet of Polaroids” to Barneys New York and Bergdorf Goodman. Both fashion meccas picked up the collection, and Carney and Ross soon added handbags, jewelry, and housewares. Within four years, they had a retail store in the West Village, complete with penny-tiled floors, tin ceilings, and a celebrity following that includes Liv Tyler.

By 2005, however, the relentless travel and stress of the retail world began to wear on them. “We’d been doing Patch for seven years. It was time to step back and get some perspective,” says Ross. They closed the store to focus on their wholesale business, which had been gaining momentum. Since Carney had grown up in L 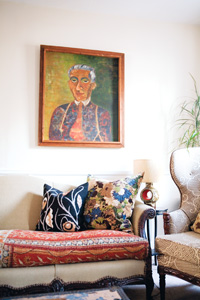 exington, the pair searched for a combined apartment and workspace near Boston—they found one on a tree-lined street in Huron Village.

“It’s a little like being in the country for us,” Ross says of Cambridge, clearly relishing space after years of cramped New York City living. The new neighborhood has reciprocated Carney and Ross’s affection, as retailers like Louis Boston and Hudson have started selling Patch NYC.

With their studio upstairs, the line delineating their style and Patch’s continues to blur. But most of their things belong in their own category—and it all goes back to those hand-crocheted hats.