VIEW THE SLIDE SHOW, or print out the events below.

This year’s Hatch Shell extravaganza includes a performance by Grammy Award-Winning pop icon Neil Diamond, and the event will be hosted by The Late Late Show‘s Craig Ferguson. More than 20,000 pounds of explosives are set to go off for the annual pyrotechnic display, and there will be a flyover executed by the 104th Fighter Wing and the 131st Fighter Squadron. For more on the show and Harborfest, click here.

Opening Ceremony
June 30, Noon-12:30 p.m.
West End of Faneuil Hall Marketplace
Celebrate the 28th Anniversary of Harborfest with a slice of cake and listen to the fifes and drums of the Bostonia Allarum Companie. 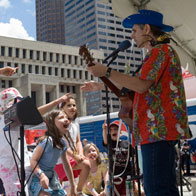 School may be out for the summer, but that doesn’t mean youngsters should stop learning. Take them out for a 4th of July lesson that covers the nation’s birthday with a wide variety of entertaining and educational activities, such as a visit to the USS Constitution Museum, State House, the New England Aquarium, or the Freedom Trail, and even set sail aboard the Liberty Clipper. At City Hall Plaza, there will also be juggling and entertainment by Fly by Night, music by Wayne Potash and the Music Fun Band, balloon fun and more! 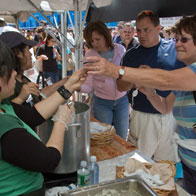 Restaurants from all over town will compete for the title of “Boston’s Best Chowder.” More than 2,000 gallons of New England’s signature dish will be ladled out to the crowd of slurp-happy chowder-samplers. $7-$10 admission.