My desk is buried and my living room looks like a mailroom. I need help!

Step 1: Consolidate
We separate things into piles. Apparently shoving bills in between my couch cushions doesn’t count as filing.

Step 3: Categorize and Containerize
Going through old photos proves difficult. Is that scruffy guy a third cousin once removed, or someone I once removed from my freshman dorm? 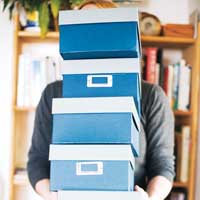 Step 4: Label
Tagging every folder, box, and drawer sounds like a drag. But I discover that as a grownup, it’s fun to put stickers on stuff.

Labeled files will help me remember that I’m organized now.

So this is how a desktop should look—lean, clean, and serene!

“A place for everything, and everything in its place.” It’s an adage I used to interpret very loosely. But when a scavenger hunt for a stapler successfully ended at the toilet tank, I realized I needed some help. Not a moment too soon, I called professional organizers Sarah Buckwalter and Kate Altieri of Organizing Boston. They rescued my cluttered home office with their signature five-step process: consolidate; sort and purge; categorize and “containerize;” label; and maintain.

Buckwalter gave my space a quick once-over. “You kind of have mail everywhere,” she diagnosed, and added a mantra of sorts: “Clutter is postponed decisions.” And the organizing commenced… First we consolidated all my paperwork, loose photos, and gadgets onto my home office floor. Buckwalter asked me what I’d been using for a filing system. Apparently shoving bills between my couch cushions didn’t really count. The pile was daunting. “It gets worse before it gets better,” Altieri said.

Next, Buckwalter provided separate cardboard boxes for office supplies, photos, and memorabilia. What was left went into separate boxes for recycling, trash, and donations—“People are always trying to give me stuff,” Buckwalter commiserated.

I’m sentimental, so purging wasn’t easy, but I realized that if a friend’s kid just celebrated his bar mitzvah, it was probably okay to toss the driving directions to his bris.

Onward to the categorizing! Buckwalter plucked a talking George Bush doll from my desk. “Is he an office supply?” she asked with a raised eyebrow. Point taken. Everything in the office should have a logical home, she explained, stressing the importance of a good filing cabinet and some drawer organizers. Altieri then labeled every file, container, and desk drawer. Sure, I was the only one using the space, but labels would help train me to think like an organized person. Two afternoons later, my office space looked like it belonged to an organized person. Altieri sensed my culture shock. “It’s okay to have white space,” she said, gently. 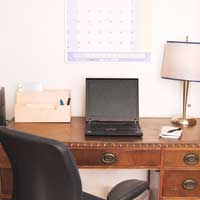 After a few weeks, Buckwalter called to check up on me. And doggone it, I was—and am—maintaining a clean desk and a logical filing system. So would I recommend an organizing service to my messy brethren? Abso-freakin’-lutely! Without professional help, my stapler would still be living on my toilet. $60 to $80 per hour for de-cluttering services, depending on the size of the project. Organizing Boston, 617-699-1263, organizingboston.com.