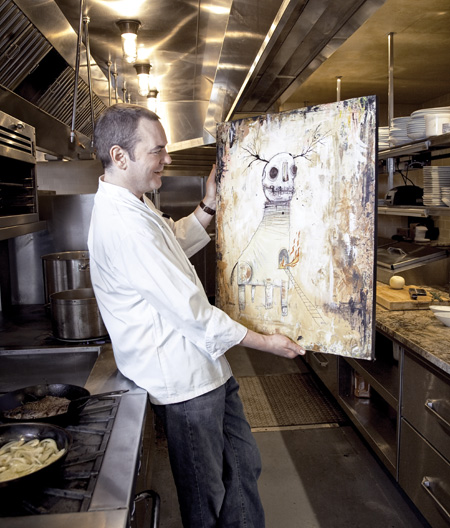 “I never wanted to be anything but an artist,” says Jay Murray, who some consider a Picasso of the kitchen. After dabbling in painting, guitar, and piano as a kid, the current Grill 23 chef moved on to fiction writing at Hampshire College, where he came to the realization, “It’s a lot easier to be a cook than an artist.”

Today, his truffled tater tots sate power lunchers daily, and he’s content to merely surround himself with contemporary art. “Every year, my wife and I put aside money for one piece by a local artist,” he says. Among the growing collection in their Melrose home are two giant oil-on-plywood panels by Boston artist Raul Gonzalez and a colorful Pauline Lim landscape. But this year’s wish—the $3,000 The Trap Is Set by former Mass Art student Joe Keinberger—exceeds their means for now. Plus, Murray’s eight-year-old son, Owen, thinks this particular 24-by-30-inch acrylic, ink, and pencil collage is creepy. A chef can still dream, though. “I think it’s beautiful,” Murray says. “There’s a darkness to it—a sense of emergency. I like its mystery.”