Designer: Of the Moment
Subscribe
Follow
I'm a scraper
This search result is here to prevent scraping

Designer: Of the Moment

Decades before double-height living rooms and walls of windows began infiltrating Boston homes, Brian Healy was a connoisseur of the modernist aesthetic, designing beautifully balanced residences in places like New Jersey, New York, and California. Those projects earned his eponymous firm plenty of national and international recognition over the past 30 years (including 18 Boston Society of Architects awards and six Progressive Architecture Awards). Now, finally, Healy’s getting his due in the Hub.

This spring, the Boston Architectural College displayed examples of Healy’s recent work in its Newbury Street gallery. Entitled “Commonplaces,” the presentation showcased wood models, paintings, and drawings created during the past two years. In conjunction with the show, Healy was appointed the BAC’s 2009 Hideo Sasaki Distinguished Visiting Critic. 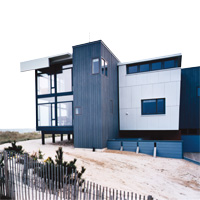 It had been a long time coming. Healy never assumed New Englanders would flock to his aesthetic when he moved to Boston in 1986 after graduating from Yale and working for architect Richard Meier in New York. A true modernist, he always saw his work as part of an architectural continuum; by using various materials, color, and scale, he anchors buildings in their landscapes. As a result, his homes are refreshingly unfettered by stylistic attitudes. Each Healy house—rigorously studied through physical 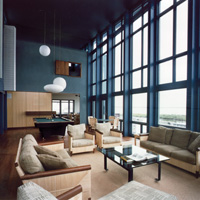 models, drawings, and computer renderings—is a current, custom portrait of its residents, rather than a contemporary interpretation of a bygone era.

Boston homeowners, who once might have worried that neighbors would resent a contemporary house, have begun to integrate modern ideas into their nests with open, well-lit kitchens and flexible, interlocked spaces. That’s good news for architects like Healy, though he’s quick to admit his clients are more often forward-thinking transplants than Yankee preservationists who like new kitchens. “Most people who call me aren’t originally from here,” he says, “but they choose to live here as I have. Because New England means something different to each of us, every project is an opportunity to contextualize modern architecture in this historic place.”