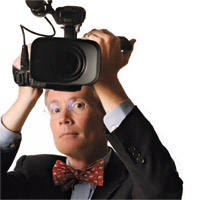 Everyone else has a reality show—why not you? Filming your wedding’s laughter, tears, and hilarious unscripted moments promises viewing pleasure.

As with finding the perfect mate, choosing the ideal videographer is “primarily about chemistry,” says Holden-based filmer Whit Wales. Long gone are the days of handheld amateur videos; pros like Wales, who’s been capturing nuptials on camera for a decade, use modern techniques—same-day edits and “fusion” filming, among  them—to create lasting and entertaining mementos (i.e., no more boring wide shots of the whole band). A good cameraperson, he says, will shadow you on your big day without being intrusive or blinding guests with bright spotlights. And Wales always makes sure to prep couples for their starring roles with a few helpful tips.

What moments should every couple get on tape? To me, it’s less about the what and more about the how and the quality. Intimacy is crucial in this process; a videographer should capture spontaneity, something that’s always genuine. Such great moments can be when the bride first sees herself with her veil on, or when, at the end of the ceremony, the two mothers hug with tears in their eyes.

We all want a record of who shared our special day, but asking every guest to say a few words can be so awkward—and long. It’s always good to separate well-wishes from the overall sequence of the day. So if it’s important for the bride and groom to have a lot of recorded tributes, I would suggest a second camera in a side room. Another option is doing it at or before the rehearsal dinner. That way, the wedding party members can focus on their verbal mementos without being overwhelmed or distracted by day-of responsibilities.

How can a couple really personalize their video? Same-day edits—filming the preparation and ceremony, then immediately creating a 15-minute video to be played at the reception—are very popular now. And sometimes I’ll film the rehearsal and the rehearsal dinner; from a practical perspective, it allows the family to get used to the filming, and that night’s toasts tend to be much more detailed and poignant. You can also meet with your videographer before the wedding to capture the details of how you met, the proposal story, what you love about each other, and what you hope for in your lives.

Nobody wants their tape relinquished to America’s Funniest Home Videos. Where should bloopers go? I do an outtake section. One of the funniest moments I’ve experienced was -actually a sound bite. The best man, who was a rather portly fellow, popped open the top button of his pants. He sought help from the limo driver, who had some black duct tape in his trunk. The sound of the unfurling tape being wrapped around the best man while the groom and groomsmen were in hysterics was very memorable.

What should couples on a budget do? Ultimately it comes down to making choices about how much of the day you want documented. Or you can ask your videographer to just provide you with rough footage—and have him or her do a full edit down the road when you can pay for it. Same-day edits can also provide savings, as they don’t involve filming the entire reception.

What are some of the biggest trends in videography right now? Fusion, or filming with hybrid cameras that capture both still shots and film footage, is big. Then there’s the new documentary style, which combines personal stories and intimate shots with cinematic flair. In general, edits are shorter now, so you won’t need to watch your tape with your finger poised above the fast-forward button. Ten years ago, it wasn’t unusual to receive a one-to two-hour-long wedding video. Now most come out around 45 minutes.

Wales’s best advice for the camera-shy.

Know what (and whom) to expect by meeting with your videographer at your reception site ahead of time. Ask about the process and check out the camera and lights he or she will use.

Get Comfortable on Camera

Remember to look directly at, or completely away from, the camera, and your videographer will take it from there. Visible self-consciousness occurs when couples aren’t sure of where they should look.

Relax! You Can Always Edit

Worried you might regret that champagne-fueled comment later? It’s your video—and you have the right to take it back. Let your -videographer know your concern and any iffy moments will disappear.
B.J.