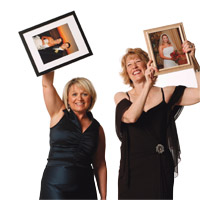 THE MOTHERS OF THE BRIDE

Bride Wars aside, it isn’t only the affianced who struggle with wedding planning. Sometimes, their moms have it just as rough—especially in trying to find the fine line between helpful and overbearing.

Debra Hohnecker and Donna Tanguay were thrilled the day their daughters shared their respective news. Once the initial excitement waned, however, the chaos of decision-making (and disagreement-navigating) set in. These newly minted local mothers-of-the-bride share some insights on what helped them stay sane and how they made every moment (and penny) count during the hectic days before their daughters said “I do.”

Surprise! Your daughter tells you she’s getting married. How did you respond to the Big News?
DH: I was so excited, but I knew it would be a lot of work—and that Sarah, my daughter, would have very specific ideas. I also thought about the cost.
DT: When my daughter, Danielle, asked me what we were going to do, I said, “I’ll tell you what we’re not going to do: We’re not going to spend more than we can afford, and we’re not going to fight about it.” And I promised to remain flexible, even when I didn’t agree with something.

What were your own weddings like? Were you surprised by how much nuptials have changed since then?
DH: Oh, yes, my husband and I had a very different kind of ceremony (a lot of which we paid for ourselves), so this was new to me. We were married in rural Iowa. I never went dress shopping. My mother made my dress, and the bridesmaids made their own out of fabric I chose. We picked the flowers for the altar from a nearby field.
DT: I was 20 when I married—very young, even then. I sort of let my parents tell me what I should do, and it ended up being more of a party for them. We had a huge Italian wedding, over 300 people, and dinner cost $5.75 a person! I still have the menu. My daughter took a look at it and said, Yeah, right. She ended up going with sushi and an Asian buffet.

What were your first stumbling blocks this time around?
DH: I rained on Sarah’s parade a few times. I felt a little resentful toward the whole industry, how it makes you feel you have to have this or that. I didn’t want to see her get sucked up into that.
DT: You don’t realize how ingrained your old habits are. I’d had this vision of her wedding with all my aunts, uncles, cousins there…but when it came down to it, I realized our lives were different. It didn’t make sense to invite people she wasn’t close to. Besides, a wedding of 300 now would be preposterous.

Were there times when you really had to put your foot down and nix a particularly wild idea?
DH: At times, I felt I had to rein my daughter in a bit. My first thought was, weddings happen all the time—we don’t have to have fireworks and helicopters. And I didn’t think it was necessary, for instance, to have a garter with real crystals—though Sarah eventually won out. And when she said she wanted a videographer, I told her she and her fiancé, Anthony, would have to pay for it themselves. (They ultimately decided against it.)

But you must have made some concessions too, right?
DH: I’d never heard of save-the-date cards—they seemed really unnecessary. But I came around eventually.
DT: We’re Catholic, and Danielle’s husband, Josh, is Jewish, so we had some contentious discussions. We hired an interfaith minister, and made sure to incorporate elements of both faiths in the ceremony. They lit a unity candle, and said their vows under a chuppah that my husband and I made out of bamboo as a gesture of acceptance. I told Josh early on that I wasn’t comfortable going up in the chair during the hora. But at the reception, he caught me off-guard, and up I went!

Did either of you experience an “aha” moment when everything just started falling into place?
DH: About three months into the planning, I realized I was making myself miserable by resisting the process. I figured, if I was going to spend the money anyway, why not enjoy it? So I did. And then it got really fun.
DT: A friend of mine had recently helped plan her daughter’s wedding, and I saw firsthand how difficult it could be. There were fights and misery and periods of not speaking. I knew I didn’t want that to happen to us, so I vowed to be flexible.

It sounds like everything worked out for both of you in the end. What advice can you offer to other MOTBs?
DH: Make a conscious decision to have a blast. I loved the ceremony and reception; the whole day seemed worth every penny. Also, I bought Sarah crystal earrings and a bracelet to wear with her dress. Taking the opportunity to give her something special that she didn’t ask for was really memorable.
DT: During some sleepless nights, I’d wonder if I should defend my position more. And the next morning, I would think, Nope. This is no longer about me. It’s about her. I needed to remember that I wanted my daughter to be independent, to make her own decisions. You have to be honest about what is important to you, but you also have to be willing to give up control. In the long run, what’s important is that two families are brought together.

Family spats (and divorces) can complicate duties and seating charts. Here’s how to avoid day-of dustups.

Smart Sitting
If two of your relatives aren’t on good terms, don’t force them to share a table. Even if it’d be nice to see Mom and Dad sitting side-by-side for once, you’ll appreciate a peaceful party more. Consider placing a “buffer” table of neutral relatives in between sparring pairs to diffuse any potential arguments.

About The Aisle
If your father won’t be walking you to the altar, it’s up to you to decide who will. Moms, stepdads, siblings, and friends all make great escorts. Many brides even keep the spotlight to themselves, which is totally acceptable.

Wise Wordings
Phrasing invitations can be a challenge for nontraditional families. Ask your stationer to show you language they’ve used before. Whether it’s “Jane Doe and John Smith, along with their parents…” or “The honor of your presence is requested at the marriage of…” don’t be afraid to borrow other couples’ words. That’s what samples are for.
Donna Garlough