Working with gold leaf is a perilous business. The 22-carat sheets are mere wisps, paper-thin and prone to instant disintegration. A small book of a few hundred leaves can run upward of $1,000—a salient detail when one wayward breath might spell disaster. (And, on a recent visit to Guido Frames’ South Boston workshop, it does. I stare helplessly as the sheet in my hand dissolves into something akin to glitter.) This is the stuff of luxury, and, at this 43-year-old company, the stuff of frames.

Bill Craig has owned Guido for three years; he bought the business from founder Guido Rosengurt, an Argentinean who labored in a cramped Newbury Street showroom for decades. By comparison, Craig’s new 15,000-square-foot Southie headquarters—two stories of workstations and infinite shelves of raw wood, everything frosted with gold—is vast, but the technique hasn’t changed. “Our process is more than 1,000 years old,” says director of operations John O’Connell. “We still use products like squirrel’s hair brushes and rabbit skin glue. Some new places use shortcuts like chemicals and acrylic—and you can tell.” He holds up his competitors’ work; it looks brassy and unnatural. 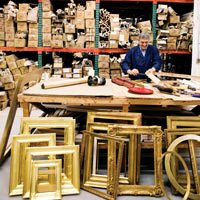 Every Guido frame is masterfully made from scratch: carved by hand, gessoed with a clay mixture, gilded using the aforementioned brushes, and distressed with agate stones by one of 15 craftsmen, most of whom have been on staff for 20-plus years. No two works are identical, a fact that’s made the shop something of a destination for VIPs. (MFA curators are regulars; so are aristocrats like the late Prince Rainier.) Longtime clients are known to drop off quarter-million-dollar paintings 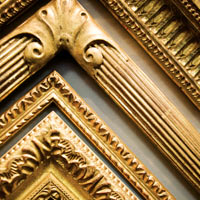 with nary a receipt or signature, while others order simple $300 gold-leafed frames for diplomas. Built from basswood, walnut, or chestnut, the frames run from 5-by-7-inches to ones so grand they cover entire walls and cost $25,000.

Like the masterpieces they showcase, Guido frames can’t be rushed. “We have people come in and say, ‘I need a frame in three days,'” says Craig. “I mean, we’re not preparing a meal. Our work takes time.” 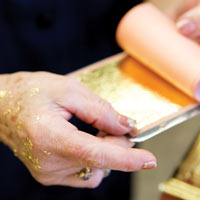 Four weeks is standard, though Craig and crew are flexible—they once pulled two all-nighters to build and ship a rush frame to an out-of-state customer.

Though the company works with an old-school technique in an old-school métier, Guido isn’t afraid of evolution. “Things have been stale for a while in the framing world,” notes Craig. “We’re coming up with new ideas.” Indeed, the company now creates mirrors, does restorations, and will soon unveil a house line of small, basic $50-to-$80 frames. None of which makes those volatile leaf sheets easier to handle; fortunately, once the gold is applied and dried, it’s virtually indestructible—and guaranteed to shine for a long, long time.