The 17th-century “cabinet of curiosities”—a display case filled with outlandish knickknacks—has been revived everywhere from Pottery Barn to local boutiques. Gurari Collections owner Russ Gerard, however, can legitimately claim to have preceded the trend.

A former dean at Rhode Island’s Roger Williams College of Architecture, Gerard has dealt in antiques for two decades. What began as a hobby spurred by his interest in old maps grew into a Charles Street gallery in 1999. Now he’s moved to the South End’s Harrison Avenue, but his focus remains the same: “My theme is the inventive mind,”he says, “whether it’s applied by a contemporary artist or embodied in scientific instruments.”In other words, Gurari Collections is a cabinet of curiosities that does not sell stuffed armadillos to hipsters. 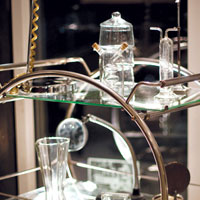 Inside the light-filled studio, one wall is devoted to The Plan de Turgot, an awe-inspiring map of Paris circa 1739. The ancient masterpiece is juxtaposed with a 2008 print by 23-year-old North Shore native Molly Goldstrom, whose whale etchings explore nature’s fragility.

The gallery’s clientele is similarly eclectic. “I’ve had six-year-olds come in and ask, ‘Ooh, what’s that?'”Gerard says, “and I’ve had 76-year-olds ask the same thing. I just want people to take pleasure in their basic curiosity.”