BEFORE THE WALLS were painted and antiques arranged, New York–based interior 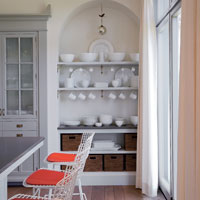 designer Bruce Bananto had already made substantial modifications to this coastal Massachusetts home. His clients, who retreat here every summer, sought his expertise in bringing interior detail to the spacious Doreve Nicholaeff–designed residence. In turn, Bananto added a tremendous amount of visual interest, including an 80-foot-long vaulted entryway — plastered and painted white — and exquisitely crafted ceilings, like the sumptuous panel-and-beam affair in the upstairs sitting room.

Details like these, hallmarks of traditional northern European homes, also evoke Belgian design—a recent Bananto obsession. “I’ve been to France a million times,” he says. “A few years back, I made my way up to Belgium and realized they had amazingly well-made pieces. But it was the lines that really appealed to me.”

His clients had also fallen in love with the austere beauty of Belgian interiors, with their muted palette and rustic finishes, and decided to join Bananto on a design tour of the tiny country. “We had learned about Belgian design through a friend several years earlier, but traveled with Bruce to see the look firsthand,” says one of the owners. “We visited an updated farmhouse and stayed in a manor that had been converted into a bed and 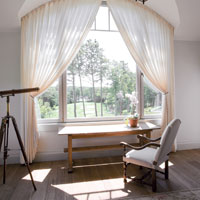 breakfast. At each place, we admired the uncomplicated, minimal look of the design and the distinctive northern European doors, casings, windows, and moldings. All of these details add warmth, interest, and subtle dimension to the rooms.”

The couple bought a few pieces of furniture during the tour, including the tall pine armoire that anchors the guest bedroom, and later imported two fireplaces found by Bananto’s Antwerp scouts. The interiors were further enhanced by exhaustive exploration of the color gray. Bananto estimates he used a staggering 120 different shades for the project; roughly 50 of them were mixed by hand using Benjamin Moore paints. “It’s absurd, right?” Bananto laughs. Maybe, but the result of his obsession is a quiet masterpiece filled with an airy elegance. It offers an ideal setting for his clients’ impressive contemporary art collection, which encompasses works by Sol Lewitt, Claes Oldenburg, and Andy Warhol.