A Hub shop specializes in the decorative elements of old.

WHEN YOU VISIT the Boston Ornament Company’s Allston showroom, it helps to 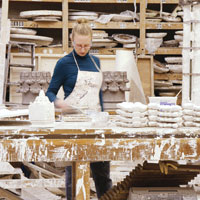 remember one thing: “Don’t wear black!” laughs Clayton Austin, who founded the all-things-plaster emporium in 1985. Indeed, within minutes of entering the building, I find that my black wool coat has accumulated a thin coating of white dust, which isn’t surprising given that staffers are mixing, pouring, and sanding plaster just a few feet away.

Amid the organized chaos of the office, there are piles of bright white medallions, rosettes, cornices, brackets, and more, in styles ranging from Victorian to Classical Revival, and varying from a two-inch flower embellishment to a five-foot-wide ceiling medallion made of more than 20 pieces. While the company sells some work » over the Web, most is custom-ordered and ends up in homes 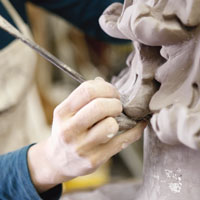 throughout New England. Austin has restored brownstones in Charlestown’s Monument Square, mansions in Beacon Hill’s Louisburg Square, and townhouses on Back Bay’s Commonwealth Avenue. He’s also added crown moldings and intricate wall and ceiling décor to grand new homes in towns like Newton and Dedham. Then there are his large-scale, high-profile restoration projects, including the Boston Opera House and the State House. “Wood moldings move, split, and degrade over time,” he explains, “but a good plaster job can last hundreds of years.”

Thanks to the old photos, antique pattern books, and contemporary magazines 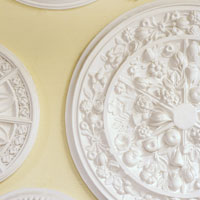 he references when designing a piece, Austin has become an expert on historical Boston architecture. “I wouldn’t say I have an encyclopedic knowledge, but doing it as long as I have, I’ve got a good feel for what’s appropriate in a house,” he explains. For 19th-century Victorian homes, for instance, Austin creates natural motifs common in that era, including acanthus leaves, fruit, and flowers. On the other hand, plaster restoration requires careful mimicry rather than creativity: Detailed photos of the existing plaster or stonework, precise measurements, and carving and casting a replica are all part of the job. 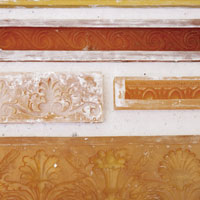 Paging through his portfolio, Austin points out a ceiling adorned with a complex crisscross pattern and shell-shaped arches and coves. There’s even a fireplace mantel that he crafted out of plaster to match an intricately carved wooden one in another room. All of this work can add significant dimension and visual interest to a space; it also makes ceilings look higher and adds value to a home.

While Austin learned his trade 30 years ago from his father here in Boston, his staff comes from all over the world, including England, France, Russia, Bulgaria, Lithuania, and Morocco. “A lot of my guys were doing this kind of work in their home countries,” explains Austin. “They’ve learned the old ways of doing things—the same materials and methods that people have used for centuries.” Aside from small modern fixes, like adjusting the plaster formula to make moldings more lightweight than the older ones, nothing’s changed, Austin says. 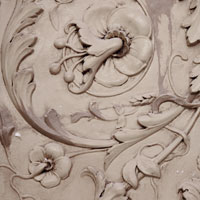 In some ways, his is a dying art, especially when cheap plastic medallions can be purchased on the Internet and wood moldings are easy to find at Home Depot. But Austin is more than happy to do things the old-fashioned—and, in his opinion, proper—way, and pass on the trade to the next generation of Boston’s skilled craftspeople.