A downtown space fits an urban family to a T. 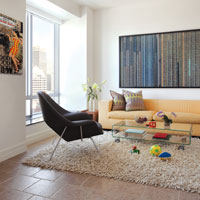 ame from a family friend, an eccentric painter and poet for whom he had designed a house in Truro. The project was built as a multitude of tiny enclaves, and was meant for use as a studio, hideaway, and home. “This house fits me like my skin,” she said once it was complete.

For Stern and his wife/partner, interior designer Diane McCafferty, fitting a client’s needs is the essence of their work. The two met while working at Schwartz/Silver Architects 15 years ago. Since then, they’ve launched their own firm, married, had a child, and settled in the South End. But while the couple’s background is in institutional work, Stern says, “We’ve really become house experts.”

Nowhere is this more evident than in clients Negin and Oliver Ewald’s home. Watching Negin move through her 22nd-floor, 3,000-square-foot condo in Boston’s Ritz-Carlton Towers, it’s clear that Stern and McCafferty are masters at tweaking urban spaces to fit a family. The duo transformed what had been a vacant model unit into an uncluttered, efficient condo that suits Negin, her art-collecting husband, and their two children just so.

Negin’s bohemian-chic aesthetic is reflected in the open floor plan and modern-vintage Bauhaus furniture. Her husband, Oliver, she explains, has a German’s penchant for clean lines, minimalist construction, and, more t 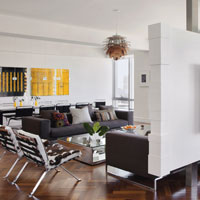 han anything, “no clutter,” she says.

It was with those clear instructions that Negin approached the design duo when she and her husband bought the condominium (they’d been renting a unit down the hall). Though she’d never worked with an architect or designer, Negin quickly learned the upside. “I used to think, Why do people hire interior designers? It’s your taste, right? You go out, you buy stuff,” she says. But after meeting Stern and McCafferty, “I could see the value right away. David and Diane worked well together. She has a good sense of space and how to use it. Their work is so intertwined.”

In fact, the designers’ partnership is key to their success. McCafferty is not a decorator, Stern insists: She approaches a space like an architect. The two will sometimes scheme up a new project separately, and then choose the stronger concept. McCafferty usually wins, Stern admits. “I’m busy thinking of how I’m going to build it as I design, while Diane tends to come to clarity more quickly,” he says.

McCafferty describes their process by weaving her arms loosely upward, pantomiming a DNA strand. “We just know when the other comes in and the other backs out, so we’re always working together in a parallel way and then we overlap,” she says. 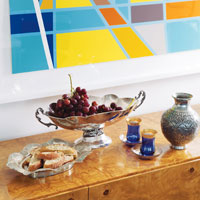 For the Ewalds’ unit, the pair started by widening and shifting the entrance to the living room, which gave the dining room an extra wall for privacy. They then combined a library and second bedroom to create a three-part children’s area — a playroom flanked by two bedrooms. The result is a camplike play space that can transition into more private quarters as the children grow. They also removed a closet to make room for an office and renovated a guest room in the back, replacing a fixed wall with a large sliding door system so that it doubles as a family room with a pull-out sofa.