A downtown space fits an urban family to a T.

At Oliver’s request, the couple installed a separate media space in the living room. With McCafferty’s guidance, Stern designed a white-paneled floating wall supported by slender stainless steel rods, which hide the wires behind the wall while defining the area. Behind it, a gray modular couch by Living Divani can be repositioned to accommodate various seating arrangements around three metal “clip tables,” designed by McCafferty and painted citrus orange.

McCafferty also created a dining room table — a single slab of marble — that Stern had to measure to ensure that it would fit into the building’s freight elevator. Bowlegged chrome-and-black leather chairs glide under it easi 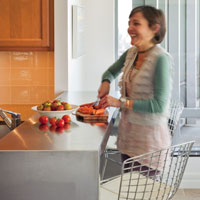 “We find that when working with families who appreciate art, it becomes the defining element. It means they have a point of a view,” says McCafferty. “The dining room combines the chrome and glass of ’70s design with more-classic elements.” Floor-to-ceiling windows across the entire corner unit afford a striking view of the Charles River and Public Garden. To keep this great vista front and center, McCafferty kept all of the furniture low and chose reflective surfaces, using pieces that appear to float off the floor.

The same effect follows in the living room, where large glass tables are sandwiched between two tailored wool couches. McCafferty reupholstered two 1930s chairs in pony hide to add brightness and texture. The space is crowned with a Louis Poulsen artichoke lamp in copper, which McCafferty tracked down in Sweden. 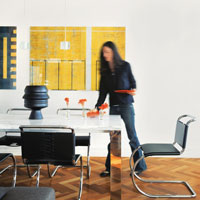 For the Ewalds, the overall design allowed them to forgo a move to the suburbs, which would have required sacrificing the convenience of the city for space. Not only have they been able to retain both, but the collaborative efforts of Stern and McCafferty have given their family room to grow.

And that fits them perfectly.