Stuff worth knowing about this week. Inspected & selected by the editors at Boston Mag.

OPENINGS
4/1 CITY GOLF COURSES NO LONGER HANDICAPPED
Here’s an argument for government takeovers: Since the city wrested control of Hyde Park’s George Wright Municipal Golf Course from a private company seven years ago, the links have become one of the best municipal courses around. Last season GolfWeek ranked the Donald Ross layout 14th in the country — one stroke behind PGA tour stop Torrey Pines North. And at just $35 for 18 holes on the weekend, George Wright tee times will fill up fast when city courses open for business today. cityofboston.gov/golf

MUSEUMS
4/1 MGH CONSIDERS ITS PLACE IN HISTORY
With the appointment today of a museum director, Mass General needs only one more thing: an actual museum. Maybe this move will accelerate plans to build an exhibition space in which to pay homage to the nation’s third-oldest hospital, perhaps most historically famous for hosting the first demonstration of anesthesia in surgery.

CONCERTS
4/2 A FAR CRY
With a rotating membership and no conductor, this 17-member group of young string musicians is more hip collective than buttoned-up orchestra. Tonight they premiere a piece by Cantabrigian Howard Frazin at the New England Conservatory’s Jordan Hall. afarcry.org

LIONS AND TIGERS AND BEARS
4/3 BIG APPLE CIRCUS begins its annual residency on City Hall Plaza. Onlookers seeking to tell the clowns apart from city workers need only look for a smile. 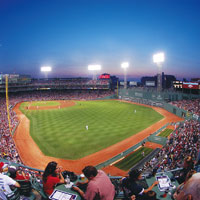 TRADITIONS
4/4 OPENING NIGHT SAVES YOUR SICK DAYS
Opening Day for the Red Sox is a misnomer this year: The game begins under the lights at Fenway at 8:05 p.m. The punch in the gut to those traditionalists who count on Opening Day as an understood vacation day can be softened by the fact that the Sox are opening the season against the Yanks.