A Masshole Goes Among The Thugs

It was a busy off-season for the Olde Towne Team. They bought themselves two superstar players…and a cute little English soccer team. Jason Schwartz takes to the streets of Liverpool to learn more about these strange (and reluctant) new citizens of Red Sox Nation. In October, Red Sox owner John Henry bought the Liverpool soccer team — or football club, for all the Anglophiles and other, more general wieners out there — and I started fretting. It didn’t even take sports talk radio to get me worked up. Henry, I dreaded, was going to shortchange the Sox while he was off kicking balls and sucking halftime oranges with the English. Less than two months later, though, the Red Sox traded for Adrian Gonzalez, with plans to pay the star slugger more than $20 million per season for years to come. Mere days after that, the team signed all-star outfielder Carl Crawford — a player we didn’t even need — to a seven-year, $142 million deal. At that point, I stopped worrying. In fact, I felt sort of good. Really good, actually. And I was still feeling that way a few weeks later when my plane touched down in England.

Henry, his partner Tom Werner, and their Fenway Sports Group associates had landed Liverpool on the cheap, paying just $476 million — or roughly the cost of Gonzalez, Crawford, and a few pitchers — to swipe the team from its previous, cash-strapped owners. Sure, the purchase might have concerned me at first, but I’d since come to understand that Liverpool FC is one of the most storied franchises in the world’s most popular soccer league. It looked like Henry had found us an unpolished gem. Liverpool could be yet another money-pumping outpost of Red Sox Nation, to be safely tucked away somewhere with that NASCAR team of ours.

Henry has said over and over that he intends to keep the two clubs’ finances separate, that what he spends on one will have no bearing on what he does with the other. But it was getting hard to miss the fact that all of his business ventures had lately been designed to serve the Red Sox mothership.

And according to the Wall Street Journal, the followers of our new soccer team hadn’t missed it. The paper had just run a story with the headline “Boston’s Baseball Spending Spree Causes Pulses to Race in an Unlikely Place: Liverpool.” One fan summed up the feelings of the city this way: “It’s all very well spending all that money on a shortstop or whatever, but we haven’t had a decent left-back for 12 years.”

Wait — did these people not understand the proper order of things? Recently valued at $1.5 billion, the Sox are worth three times what Fenway Sports Group paid for Liverpool. And it is called Fenway Sports Group. What were these Brits thinking? I’d come to England to find out just what the hell
was going on over here.

I stepped off the plane and headed for immigration, where a (surprisingly cute) agent took my passport and instructed me to remove my Red Sox cap. Satisfied that my face matched my picture, she said, “You can put your hat back on,” paused a beat to look at my brow, and then added skeptically, “if you want.” Lovely. I jammed the cap back on my head. Red Sox Nation bows to no one. Colonial Liverpool, ho!

In the neighborhood around Anfield, Liverpool FC’s stadium, is a bit like Fenway, only more downtrodden. Though some of the surrounding row houses look quite nice, a number are boarded up. The stadium is about 15 minutes north of the city center by car, so unless there’s a game, foot traffic is sparse and bars are empty except for regulars. All the better. I’d begin my investigation of this team and its curious fans by hitting the pubs and meeting some real Scousers. (People from Liverpool can be called either Liverpudlians or Scousers, which, delightfully, makes it sound as though they’re either from Gulliver’s Travels or just leaving a strip club.)

My first stop after arriving in town was the Albert, a pub plunked down mere feet from the stadium’s entrance. Around dusk, I pushed open the bar’s heavy red door and stepped into a room with walls covered in bright-red Liverpool flags and scarves. The pub itself, though, was dingy and empty, save for a few guys leaning against the bar. Though it used to be the Liverpool pub, these days the Albert is known more as a pilgrimage site for foreign fans. But the place is still frequented by some longtime die-hards — like the guys at the bar, who were speaking something like English, though I could hardly understand a word they said. Scousers’ speech is famously fast, the accents impenetrably thick.

I thought a beer might help. While the publican, a bald man named Peter, poured, I asked him what he made of John Henry. “It’s just a bit too early” to draw any conclusions, he said. (I’m quoting the segments I could understand — roughly every other sentence at the Albert.) Perched at the corner of the bar, the bouncer, Ian, a big pit bull of a fellow, was less restrained in his opinion of the foreigners who used to own Liverpool FC, Texas businessman Tom Hicks and Wisconsin native George Gillett. “I want them to die,” he barked, repeating the sentiment, unprompted, every five minutes or so. He’s probably an effective bouncer.

Ian’s anger was hardly unique in town. In just three years of ownership, Hicks and Gillett loaded up Liverpool with debt and pushed the club to the edge of bankruptcy — and the bottom of the standings. Not too long ago, Liverpool was one of the proudest clubs in the world, the Boston Celtics of England’s Premier League. They owned 18 league titles, five European Cups, seven FA Cups, and three UEFA Cups (and a cup of some sort to you if you know what any of that means). Simply put, Liverpool was legendary. But today’s squad is roughly the equivalent of the C’s during the forgettable Dino Radja–Xavier McDaniel era — a jangling medley of incompetent youth and aging competence, as Updike would have put it. Consider that every year the bottom three teams in the Premier League standings get relegated, or sent down to a lower league. (It’s as if, after a bad season, the Red Sox were kicked out of the majors and forced to play instead in Triple A.) Impossibly, the mighty Liverpool FC was, at the time of my visit, struggling to avoid that particular humiliation. 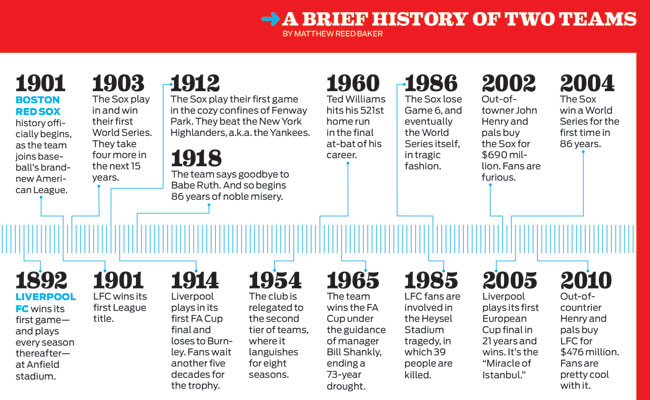 Despite this bad run, though, fans have remained maniacally loyal. The team’s theme song, after all, is “You’ll Never Walk Alone.” It was originally a Rodgers and Hammerstein tune, later covered by Liverpool’s Gerry and the Pacemakers; Scousers speak of it in reverential tones and sing along to it before every home game. So of all the evils Hicks and Gillett inflicted on Liverpudlians, probably none was worse than leaving them feeling deserted. Last year enraged supporters protested by the thousands. They even formed a human blockade outside the stadium — and this is true — preventing the owners from getting into a game. Hicks and Gillett sold only when they had no other choice — when they were unable to make the payments on a debt calculated by some as $460 million.

So when Henry bought the club and wiped out the debt, he represented a savior of sorts. But, like Hicks and Gillett before him, he is an American. And then there’s the fact that Henry, by his own admission, knows very little about soccer. And when you consider that an influential fan group called the Spirit of Shankly (sort of like what the Sons of Sam Horn are to the Red Sox, but politically militant instead of nerdy) held a rally on Liverpool’s main square last July 4 to declare independence — from America — you had to wonder about the kind of welcome Henry was in for.

Then again, Henry is used to this sort of thing. When he beat out a couple of local suitors and managed to buy the Sox in 2002, outraged fans fumed that the pale, soft-spoken carpetbagger with a Florida Marlins pedigree was planning to milk the team for cash and go cheap on players. He became known on talk radio as Casper, and not because he was friendly.

So it came as quite a surprise that here in the Albert, even Ian didn’t have any ill will for Henry. Whatever the Wall Street Journal may have found, the guys I met said they were impressed by their new owner’s modesty and that they were willing to be patient with him. According to a fan I met later, it was very encouraging that Henry’s wife, Linda, had promised to learn all the Liverpool songs.

Really, the closest anyone came to being judgmental was when Rod, the bar’s assistant manager, stopped me and asked, “Is Boston magazine a gay magazine?” I considered the question for a moment. Carefully, I replied, “No.” Rod  immediately pointed a finger at Ian. “Then he can’t be in it!” Uproarious laughter followed. (I chuckled nervously.)

On my way out, I mentioned to Peter the bartender that I was surprised by how patient everybody was. Henry had owned the team for three months already, fired a coach, hired a coach, and brought in, effectively, a general manager. It seemed like it was high time for judgments. Go talk to Spirit of Shankly, the protest organizers, Peter instructed me. “They will be very opinionated.”