Pizza
FRANK PEPE PIZZERIA NAPOLETANA
Food lovers flock to New Haven for the town’s supersavory thin-crust pizza. (It’s the old-school brick ovens.) And Pepe’s is the most legendary of them all. Though its white clam pie has been copied in New York and Boston, none matches the original. // 157 Wooster St., New Haven, 203-865-5762, pepespizzeria.com.

Comfort Food
DRESSING ROOM
Believe it or not, there’s a classically trained chef in Westport using high-end ingredients not for haute cuisine but for — gasp! — tomato soup, mac and cheese, and pot roast. Ribbing aside, Michel Nischan (who opened the Dressing Room with the late Paul Newman) breathes new life into comfort food. Few fail to be thrilled 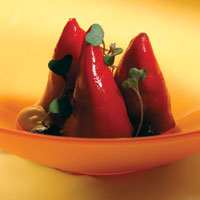 Spanish
IBIZA
Back when Ibiza opened in 2002, both Esquire and the New York Times called it one of the best Spanish restaurants in the country. It has faced stiff competition since then, but it’s still a jewel in New Haven’s crown. You’ll find more than a mere tapas joint here; the cuisine references that of Barcelona, Mallorca, and San Sebastian, with a nod to modern masters like Ferran Adrià. // 39 High St., New Haven, 203-865-1933, ibizanewhaven.com.

Doughnuts
DOTTIE’S DINER
None other than the regents of road food, Jane and Michael Stern, have proclaimed Dottie’s doughnuts among the best in the country. Start with the simple cake variety, topped with cinnamon sugar, then move on to chocolate-dipped. (And for something savory, don’t miss the chicken potpie.) // 740 Main St., Woodbury, 203-263-2545. 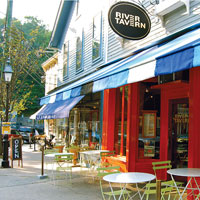 up in a sexy, modern interior (deep reds and brilliant yellows, with warm wood throughout). Recent stars of the always-changing menu have included pan-roasted Stonington monkfish with crispy bacon and winter-root-vegetable chowder, and handmade tagliatelle with a ragu featuring pork from nearby Four Mile River Farm. // 23 Main St., Chester, 860-526-9417, rivertavernchester.net.

Deli
REIN’S DELI
This roadside diner has hardly changed its menu in 38 years: Jewish soul food like
matzo ball soup, Reubens, and corned beef are still de rigueur. Located near Hartford, Rein’s is a popular pit stop on the drive from Boston to the Big Apple, and for good reason — it’s open till midnight, seven days a week. The pickles alone are worth a trip, as are the kugel and fresh bagels sold at the counter. // 435 Hartford Tpke., Vernon, 860-875-1344, reinsdeli.com.

French
UNION LEAGUE CAFÉ
This fine French restaurant has been racking up best-of awards for years now. We have no problem adding our own, thanks to the consistently excellent food. The exquisite menu changes often, with dishes such as tuna carpaccio, pepper-crusted duck, and risotto with morel mushrooms making appearances. Housed in the historical Sherman Building, the Beaux Arts interior is romantic without being stuffy, and the adjoining club room is perfect for cocktails both before and after dinner. // 1032 Chapel St., New Haven, 203-562-4299, unionleaguecafe.com.

Lobster Roll
ABBOTT’S LOBSTER IN THE ROUGH
An unassuming BYOB shack with bare wooden tables, Abbott’s happens to offer
some of the best seafood in the state — along with the best water views. This year the summer staple has introduced a raw bar outside on weekends, featuring oysters from nearby Mystic, local clams, and crab claws. Bring a six-pack (or champagne), arrive early to avoid crowds, and get a table on the water. Once situated, order the hot lobster roll (served Connecticut-style with butter, no mayo). You can thank us later.  // 117 Pearl St., Noank, 860-536-7719, abbotts-lobster.com.

Farm-to-Table
STILL RIVER CAFÉ
Her food may be served in a 150-year-old barn done up in minimalist-rustic style, but chef Kara Brooks’s menu is exuberant — a celebration of all the seasonal gems her husband, Robert Brooks, grows on their 27-acre organic farm. Every plate is a 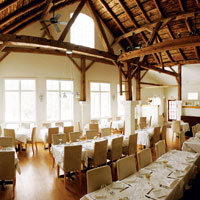 Pastry
ISABELLE ET VINCENT
France’s loss is our gain: Seventh-generation French pastry chef Vincent Koenig and wife Isabelle moved to the U.S. in 2007 and immediately set about re-creating the award-winning patisserie they owned in Strasbourg. Sample any of the divine chocolates, pastries, ice creams, or breads offered here for a true taste of Gallic greatness. // 1903 Post Rd., Fairfield, 203-292-8022, isabelleetvincent.com.

Pub Food
O’NEILL’S PUB AND RESTAURANT
Owned by an affable crew from County Tipperary, this beloved spot in “SoNo” recently moved from its original space into one that’s twice the size but has the same classic Irish pub feel. Translated, that means: warm welcome, good company, and great food and drink. Try the signature Tipperary “blue and gold” burger — Angus beef topped with blue cheese and golden fried onions — or the Irish scones, made using a recipe from the owners’ mother. // 93 N. Main St., South Norwalk, 203-838-0222, oneillsono.com.