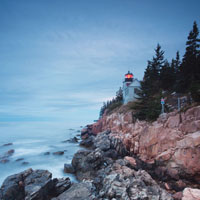 ACADIA NATIONAL PARK
The first national park east of the Mississippi sports some impressively rough terrain: rocky shores, crashing waves, and magnificent ocean views from rugged peaks. Yet there’s a surprising diversity of hiking trails within its confines. You can opt for the Precipice Trail, which will have you scrambling up rungs placed on nearly vertical rock faces, or take the family on a quiet but no less scenic jaunt along the ridge atop Otter Cliffs. No matter which direction you choose, make sure to cap off a really hot day with a dip at Sand Beach, Maine’s most picturesque swimming spot. // Eagle Lake Road, Bar Harbor, 207-288-3338, nps.gov/acad.

Hidden Museum
OGUNQUIT MUSEUM OF AMERICAN ART
Once a thriving artists’ colony, Ogunquit is the only museum in Maine — and one of just a few anywhere — dedicated exclusively to American art. With 1,600 paintings and sculptures in its permanent collection and a three-acre outdoor sculpture garden, it’s considered by aficionados to be one of the most beautiful small-scale museums in the United States. // 543 Shore Rd., Ogunquit, 207-646-4909, ogunquitmuseum.org.

Kids’ Attraction
OWLS HEAD TRANSPORTATION MUSEUM
“Wow!” “No way!” “Cool!” Haven’t heard enough of this from the backseat of the minivan? Then accelerate to the little-known Owls Head Transportation Museum, featuring — we kid you not — one of the finest collections of early aircraft and automobiles in the world. With more than 100 historical cars, bicycles, carriages, and motorcycles, this place houses enough big machines to engage anyone’s imagination — including an extraordinarily rare 1935 Stout Scarab, the so-called first minivan. // 117 Museum St., Owls Head, 207-594-4418, ohtm.org.

Place to Appreciate the Gilded Age
BAR HARBOR
The Gilded Age of the late 19th century often gets a bum rap, what with all the tales of robber barons and Pinkertons keeping down the masses. But that era’s legacy gets a makeover at the once-exclusive resort village of Bar Harbor on the 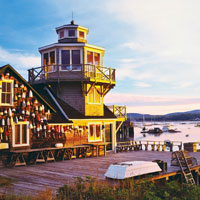 fringes of Mount Desert Island, which is now very much open to the hoi polloi. Charming shingle-style estates cluster around the central square, offering affordable lodging to a curious mix of foreigners, RVers, Deadheads, and surfers, along with remnants of the old-money clan that made MDI all the rage. They all flock next door to Acadia National Park, a natural wonder set aside thanks to the forward-looking conservation efforts of tycoons of long ago. // 207-288-5103, barharborinfo.com.

Way to Beat Summer Traffic
MAINE EASTERN RAILROAD
If you haven’t dealt with Maine’s coastal Route 1 in the summer, then heed this warning: Getting stuck behind a rambling RV means waiting practically until autumn to reach your destination. The Maine Eastern Railroad is the antidote: Meandering its way along 57 miles of track, it introduces visitors to the midcoast’s small towns via stainless steel railcars from the art deco era, fully restored to today’s standards of safety and comfort. Abundant packages are available, including rail-and-sail trips, overnights at inns, and museum-hopping. // Stations in Rockland, Wiscasset, Bath, and Brunswick, 866-637-2457, maineeasternrailroad.com.