Beach
CRANE BEACH
“Majestic” hardly does justice to the landscape at Crane, where sand-swept hills roll sweetly to a pristine shore. To the north, Plum Island creates a welcome barrier from rough surf, while a ban on watercraft and gear keeps man-made disturbances to a minimum. Most visitors are content to soak up the tranquil beauty. However, this beach is also a wildlife refuge, meaning its five-plus miles of trails may reward hikers with glimpses of rare species. // Argilla Road, Ipswich, 978-356-4354, thetrustees.org. 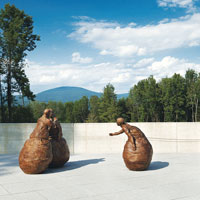 Unexpected Treasure
CLARK ART INSTITUTE
For sheer jaw-dropping potential, few small art museums surpass the Clark — a fact made all the more amazing by its remote location in the boondocks of the northern Berkshires. Most of the museum’s famed Impressionist collection is out on a three-year tour. But you can still get your 19th-century fix with the new “Pissarro’s People” exhibit, starting June 12. Equally rewarding is the American gallery, featuring haunting and emotional paintings by the likes of Sargent, Homer, and Remington. // 225 South St., Williamstown, 413-458-2303, clarkart.edu.

Art Museum
MUSEUM OF FINE ARTS
Boston’s foremost art museum has it all: mummies and amphorae, French impressionists, and abstract expressionists. The jaw-dropping highlight, however, is the Arts of the Americas Wing, opened in fall 2010, which has taken many pieces formerly displayed in dark basement galleries and given them space to breathe in a brightly lit, glassed-in viewing area. The galleries themselves are nearly as inspiring as the art they feature. // 465 Huntington Ave., Boston, 617-267-9300, mfa.org.

Historical Site
PLIMOTH PLANTATION
Everyone knows the story of how the Pilgrims landed at Plymouth Rock in 1620, held a Thanksgiving, and created a nation. And yes, this is a faithful re-creation of the Plymouth colony, where children can watch costumed handymen ply their trades and go about their daily duties. What makes this place head-and-shoulders above, however, is the way it has changed with the times to seamlessly incorporate new scholarship about the Pilgrims — and especially about their counterparts, the Wampanoags (duly represented at a neighboring re-creation of a Native American village). The result is an accurate depiction of early American life that doesn’t shy away from taking on sacred cows. (Exhibit A: The story of Thanksgiving is much more 19th-century myth than reality.) // 137 Warren Ave., Plymouth, 508-746-1622, plimoth.org.

Reason to Get on a Ferry
BOSTON HARBOR ISLANDS
Talk about hiding in plain sight — right in the middle of one of the busiest harbors in the country is an oasis of natural beauty, history, and outdoor activities that couldn’t be easier to find. Ferries depart from Boston’s Long Wharf several times a day to tour a dozen of the 34 islands that make up this historical park. There’s Georges Island, complete with ranger-guided tours of a haunted Civil War–era fort; Spectacle Island — rebuilt from landfill dug out of Boston’s Big Dig — with beaches, boating docks, and hiking trails; Little Brewster Island, home to the oldest lighthouse in America; and much more to explore. // Boston, 617-223-8666, bostonislands.com.