A FALL HARVEST FAIR is a quintessential New England experience: The crisp scents of apples and hay bales fill the air; the leaves on the trees have started to crimson around the edges; and the shrieks of children reverberate from the midway — all of this combining to form a festive atmosphere. They are hardly the only seasonal amusements the region has to offer, however. Throughout the year, everything from sophisticated art bazaars to down-home food festivals take over the streets of towns large and small. Some are good for popping into for a few hours; others are destinations unto themselves.

Topsfield Fair
At 193 years strong, this agricultural fair is truly (ahem) tops in its field. First, the mind-boggling pumpkins: These half-ton monsters compete to be the largest at the fair — and sometimes in the world. Then there are the special shows of horses, dogs, rabbits, and bees, as well as pie contests, live music, and those classic midway rides. >> 9/30–10/10; Topsfield, MA, topsfieldfair.org. 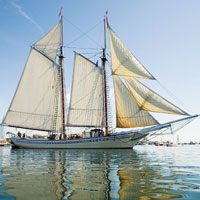 Maine Boats, Homes, and Harbors Show
The Pine Tree State’s marquee boatbuilding expo will put wind in any landlubber’s sails with a parade of tall ships; a fleet of 70 yachts, windjammers, and lobster boats in the harbor; and a vast array of 150 nautical exhibitors. On the lighter side, there’s the much-anticipated Boatyard Dog talent competition, a kind of on-deck “stupid pet tricks” that wows the crowd with both goofy and athletic canine feats. >> 8/12–8/14; Rockland, ME, maineboats.com.

International Festival of Arts and Ideas
Yes, it’s a broad name, and indeed for 15 years this New Haven event has been the area’s top stop for those seeking a highbrow fix. Featuring a grab bag of films, music, dance, theater, and lectures (that’s the ideas part), it’s hosted the likes of the Royal Shakespeare Company, They Might Be Giants, Savion Glover, and even Salman Rushdie. >> 6/11–6/25; New Haven, CT, artidea.org.

Fields of Lupine Festival
Leaf-peeping is so passé. At least, it’ll seem that way after you spend time among mountainous meadows of luscious purple flowers. Lupines are ubiquitous in northern New Hampshire, but the Franconia Notch region rightfully gives them their due, with wildflower tours, outdoor music, and arts and crafts shows scattered throughout its villages. And then, of course, there’s the main 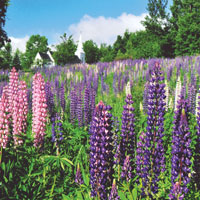 George Wein’s Newport Folk Festival
This is easily one of the country’s most legendary music festivals — and that was even before Dylan went electric here — and still one of the best. Of course, these days Pete Seeger and Joan Baez have given way to soul wonders Sharon Jones and the Dap-Kings, and roots rockers the Avett Brothers. But with bluegrass showcases and forever returning artists such as Richie Havens, old-school folkies can rest assured that this land is their land, too. >> 7/29–7/31; Newport, RI, newportfolkfest.net.