Back to the Land... Almost
Subscribe
Follow
I'm a scraper
This search result is here to prevent scraping

Back to the Land… Almost 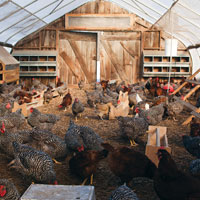 Even so, for someone who shuns Birkenstocks and abhors bugs, there’s a pretty wide gulf between buying food from a farm to cook in my nowhere-near-rustic home, and feeding pigs and chickens and weeding a garden. Would I really enjoy walking the walk as opposed to just talking the talk, if it meant spending a weekend on a full-fledged farm?

Certainly, plenty of other people are doing just that these days. If ecotourism and agritourism have indeed taken the international travel industry by storm, then New England is one of the most solid regional conquests — in large part thanks to the rise of the farm stay. And the phenomenon has developed out of not just the public’s growing interest in green travel, but also out of simple pragmatism. Over the past decade, independent farms across the country have seen profits decline thanks to decreases in food prices and increased expenses, and they’ve struggled to find additional sources of income. A handful around the region started opening themselves up as low-cost bed-and-breakfasts, where guests could pay even less by lending a hand with chores. In the past few years they’ve found real revenue as the public’s interest in the slow-food movement has gained momentum (thanks in no small part to books like The Omnivore’s Dilemma and movies such as Food, Inc.). Guests have become interested in getting genuinely involved with farm life — without necessarily sacrificing any comfort or luxury in the process.

This is, I suppose, what I am thinking about by mid-morning, when I finally start the day by bringing my kids, Zach and Cleo, to collect eggs with Caserta. Lulu, the farm’s affable goldendoodle puppy, is there being entertained by one of the farm’s two beautiful, endlessly strutting roosters; Zach and Cleo, meanwhile, are being endlessly entertained by Lulu. Caserta shoos away an aggressive rooster, and tells us it’s time to collect some eggs. Zach steps up a little too emphatically. “Very carefully,” warns Caserta. “You don’t want to break any while you’re collecting them.” Meanwhile, Zach’s a little confused. “Are they Easter eggs?” he asks, noticing that these are hardly your dime-a-dozen brown eggs, but instead a mix seemingly created in Dr. Seuss’s imagination; some of them are green, some blue, some brown, and some white. Caserta laughs. “The Americana chickens lay green eggs,” she says, “whereas Bard Rock is a good layer of brown. They all taste the same, but are very different looking.” I pick out a handful of sterling-blue eggs, and find a couple of creamy-hued specimens to boot. They strike me as utterly perfect, jewel-like creations that I’m incredibly lucky to be holding…until a squawking chicken suddenly claws its way across my foot out of nowhere, reminding me of the awkward creature that created said jewel.

We’re in the greenhouse, where the chickens are moved during cold weather. Here, they’re kept as warm as they would be in a typically dark hen house, but still get direct access to the sun. According to Caserta, that means they get approximately seven times more vitamin D and, conveniently, lay noticeably more eggs. As a bonus, the fresh air keeps the greenhouse smelling nicely of cedar shavings — much unlike the stinky egg houses of factory farms.

That kind of ingenuity powers every bit of the Inn at Valley Farms’ 105 acres. Caserta’s “beyond organic” philosophy means that all the animals are out on the pasture as much as possible, and are rotated between pastures regularly. As we walk back through the chicken greenhouse, she describes the farm’s pride and joy — a contraption known as the “eggmobile.” It’s a mobile trailer that, in summer months when the chickens are out of their warm greenhouse, follows them around as they range freely in their pastures, and gives them a home in which to lay their eggs.