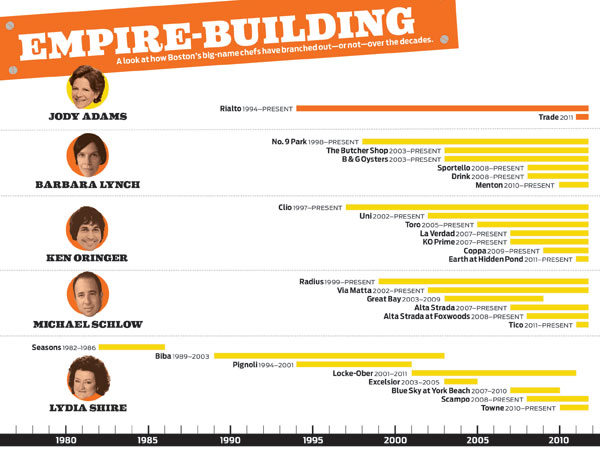 For Larson, the frustration emanating from her chef was palpable. “She didn’t want any more voices in the mix,” Larson explains. After 16 years, the pair decided it was time to split. Adams took full custody of Rialto, while Larson and Haskell moved on to other ventures.

Adams shut Rialto down for five weeks, then reopened in February 2007, ushering in a new era. The redesign was a truer reflection of its sole owner: lighter, softer, more approachable. And Adams was the decision-maker.

“It wasn’t just about the food or the customers,” says Adams. “It was about the budget, about, ‘Do the chairs fit around the table? Do the uniforms work?’ Every piece of that restaurant came from my head.” The menu was overhauled, too. Instead of an overarching Mediterranean influence, Adams became hyperfocused on regional Italian cuisine, with a menu that covered a new area of the country every month. And instead of spending all of her time concentrating on what came out of the kitchen, she had to build a staff that could execute her vision, beginning with her rising chef de cuisine, Carolyn Johnson.

“It was nerve-racking,” says Johnson. “We were going for a four-course menu with a pasta course in the middle, which no one in Boston was doing then. We had no idea how diners would respond.” For Adams, the reinvention transformed her as much as it did the restaurant. “I was terrified that people would discover that I didn’t know what I was doing,” she admits. “I didn’t have enough confidence. But once I opened these new doors to Rialto and people came in, it was like something had been peeled off of me.”

Jody Adams isn’t exactly basking in free time. On a recent Monday, she’s zipping around a farm party hosted by the local food publication Edible Boston. Tuesday, she’s up early for a bike ride (she’s training for the 192-mile Pan-Mass Challenge), then sits in a two-hour meeting before hitting the kitchen with her cooks to prep a dish for that night’s Taste of Cambridge fundraising event. Wednesday there’s another bike ride, another round of meetings, and then she’s glad-handing local press and posing for photos during a reception celebrating the summer opening of the Rialto terrace. (“But I’m not wearing any makeup!” she protests.) On Thursday’s agenda: a Guerrilla Grilling expedition—a name she’s given to the regular farm and purveyor visits she makes with her entire kitchen staff. On these trips, the crew loads up a car with pantry items, visits an organic farm, a poultry processor, or a chocolate maker, and, after a tour or a hands-on lesson, whips up a feast for the host’s staff. On a rare Friday morning at home, Adams speedily chops garlic while working on a recipe for the food blog that she and Rivard launched in June. The Garum Factory, named for an ancient fermented condiment, is an online repository of recipes, stories, and food photography. By noon, she’s out the door to visit the new Trade space, and finally it’s back to Rialto for a 10-hour shift.

Given her already-packed schedule, it’s understandable that Adams would be reluctant to open a new business. Adding to the trepidation is the fact that any chef with more than one venture—Ken Oringer (Clio, Uni, Toro, Coppa), Michael Schlow (Radius, Via Matta, Tico)—will have his or her critics. The kind ones will question how you can devote your time to multiple ventures and still maintain the quality; the cruel ones fling the s-word (sellout). But if any chef in town has a proven ability to multitask, it’s Adams. So why, when it comes to building her own brand, has she remained more tortoise than hare?

“I’m approached [about starting new restaurants] all the time,” she says. “I’ve looked at tons of properties around Boston in the last four years on my own.”

Interestingly, the one idea that finally took was pitched to her by two men nearly 20 years her junior: Sean Griffing, most recently the general manager of Rialto, and Eric Papachristos, a former analyst with an MBA and the offspring of restaurateurs. “Eric and I were always talking about the next restaurant we were going to open,” says Griffing. Given that he was already working at Rialto, he says, it was a natural progression to join forces with Adams.

It didn’t take long for Adams to sign on. “Sean and I had talked for years, on and off, about the possibility of working together,” she says. “When we looked at what we all brought to the table, it was all so different, but it really makes a whole. They have new, fresh energy and perspective.”

Once the trio decided to partner up, they scouted spaces as a team.“We were all over the place—Kendall, Central, Seaport, downtown,” Griffing recalls. They eventually settled on the Russia Wharf building because of its architecture and locale. “The visibility is just spectacular,” says Adams.

Over and over, Adams maintains that her intention is not to run the show, nor to take full credit for it. “Restaurants don’t exist just because of the chef,” she says. “They’re not successful just because of a chef. There’s a whole lot of people [and] pieces of the puzzle that are extremely important, and to assume that you’re the be-all, end-all is, you know, not me.”

But there’s no question what the public will take away: This is a Jody Adams project. When news broke that there were restaurants going into the building, which is now called Atlantic Wharf, the developers announced that a “celebrity chef” would be involved. And like the redo of Rialto, Trade’s design reflects that chef: light, airy, and energetic. The chef de cuisine, Andrew Hebert, worked at Rialto for almost seven years, so he understands Adams’s cooking style and can translate her menu precisely. She, of course, insists the menu will be as much his as hers, but its focus on healthful, approachable dishes is signature Adams.

And just as she’s launched the careers of so many at Rialto, she plans to use Trade as a proving ground for the next generation of chefs. Two prep-cook positions will be reserved for high school students enrolled in Future Chefs, the school-to-career program founded by Toni Elka, so that Adams can, as always, be a mentor.

The entire space, in other words, will be an extension of Jody Adams.

Floating through the Rialto dining room on a recent summer night, Adams approaches a table of strangers. One guest tries to order dessert from her. “Your server will come over and take that,” Adams replies.

The woman stammers, then a flash of recognition. “Wait—are you her? Are you … Jody Adams?” she squeals, eyes wide.

Adams responds by pointing to the name on her jacket. “That’s what they tell me,” the chef says, smiling. She takes another minute to ask about the meal before ducking back into the kitchen and calling it a night. There is a cooking class the next day—a biking trip to the market followed by lunch at the restaurant for 20 students. After that, she’ll have a rare day off before returning Monday morning to jump in again at 100 miles per hour.

Back at the table, the women are beaming. “That was Jody Adams!” one chirps. A real live celebrity chef.