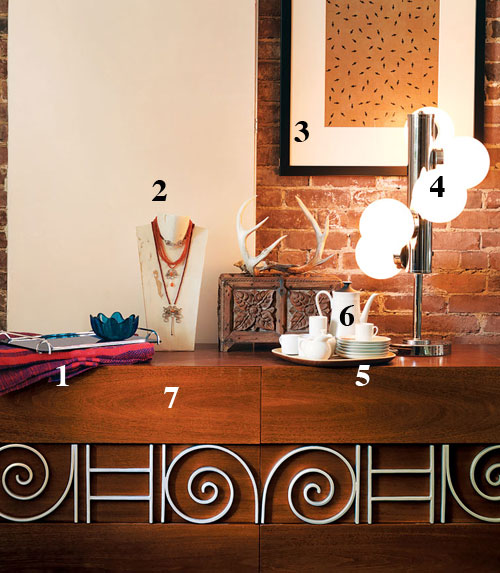 WHILE THE DANISH MODERN style proved popular at Pamela Watts’s Cambridge store, her growing collection of Hollywood Regency–style wares needed a different audience. Her solution: a second (slightly glitzier) Reside across the river. “There’s an up-and-coming younger crowd in the South End that wants things with a little more bling,” she says.

1. Owner’s Fave This Danish linen tablecloth ($175) from the early ’70s once belonged to Talbot Waterman, a famous marine biologist and Harvard alum.

3. Local Flavor Tobias Shepard’s Arrows ($1,800) is made of grocery-bag logos from Martha’s Vineyard.

5. Most Versatile These 1960s Arzburg china cups from Bavaria ($42 for four) are similar to those in the permanent collection of New York’s Museum of Modern Art.

6. Owner’s Fave A 1960s porcelain coffee pot by Bareuther & Company ($42) is “like all German china—very beautifully made,” says Watts.

7. Best Investment “You can really see the Spanish and Latin influences in the scrollwork,” says Watts of this 1950 solid mahogany bureau by Edmund Spence ($3,500).