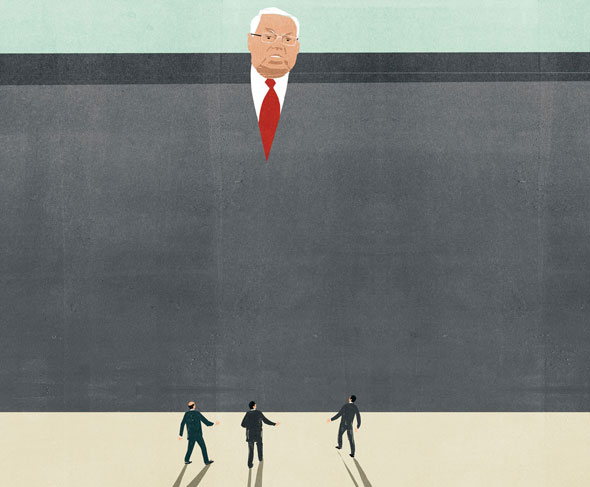 It’s november in an off-year election, which means Bostonians are pretending to care who survives a seven-way race for four at-large seats on the city council. What they should be preoccupied with, though, is the only political question in town that really matters: Can anyone keep Mayor Tom Menino from winning a sixth term in 2013?

The consensus? Probably not.

That’s why Menino ought to use the occasion of the city council elections on November 8 to announce that this term will be his last. Not because his reign has been so bad for the city, but because stagnation — like, say, 20 years with one mayor — is bad for democracy.

In September’s preliminary election for city council, less than 14 percent of registered voters cast ballots. No one expects many more to turn out for the general election this month. Forget the usual analysis of low voter turnout: It’s not the fault of lousy weather, a younger demographic, a transient population, or apathetic black and brown people. No, I believe it’s a sense of futility that keeps voters at home, an acknowledgment that Menino runs the show — so why bother voting for powerless city councilors? They either rubber-stamp Menino’s decisions or provide token, meaningless opposition. The mayor could teach Middle East rulers the meaning of entrenched power; no one thinks he’s leaving anytime soon.

“It’ll never happen,” scoffs former City Councilor Maura Hennigan, who refinanced two properties in order to bankroll her failed campaign against Menino in 2005. “The only way he leaves office is when he decides to go — and he is not deciding to go. Ever.”

Halfway through Menino’s unprecedented fifth term, why would the mayor even think about not running again? He racked up 57 percent of the vote against City Councilor Michael Flaherty two years ago, a rout anywhere else, but a close call given the way Menino is used to steamrolling his opponents. In 2005, he won 68 percent of the vote against Hennigan. In 2001, he trounced Councilor Peggy Davis-Mullen with 76 percent. He ran unopposed in 1997, and in 1993, he beat then–state Representative Jim Brett by taking 64 percent of the vote. The man is a political machine.

A master of retail politics, Menino has made the rounds at so many wakes, retirement parties, and neighborhood meetings in the past few decades that a poll by the Globe in 2009 found that 57 percent of city residents said they’d actually met him. With a fragile economy and a skittish electorate leery of change, Menino is banking on another four years on the fifth floor of City Hall despite problems with street violence and struggling schools that have not yielded in 18 years to his promises and good intentions.

“He is out there 24/7,” says Brett, the failed 1993 mayoral candidate who’s now president and CEO of the New England Council, a regional business group. “He is completely engaged and the people know this is the only job he’s ever wanted. It comes across when they meet him.”

As a result, Menino owns the votes of the Bostonians who count most, the ones who show up at the polls: city workers, anyone who does business with the city, and that stable cohort of older, white folks from West Roxbury to Roslindale for whom election day is a holy day of obligation.

But Boston has changed in the past two decades. Whites are now a minority in the city, and residents of every hue need an activist, not a caretaker, municipal government. Like the 37 percent of public high school students who do not graduate in four years. Or the 95 percent of immigrants with limited English who cannot find a language class. Or the more than 45 percent of black children under 17 on food stamps. Or the roughly 30 percent of Latino families living in poverty.

Rather than focus on those priorities, Menino is spending this year ranting about offensive T-shirts on Newbury Street. He’s cozying up to gambling interests that have contributed to his favorite charity. He’s nuzzling U.S. Senator Scott Brown, a man who’s voted against much-needed social funding for everything from summer jobs to Head Start. He’s spurning a proposed Walmart in Roxbury, despite that neighborhood’s desperate need for jobs. He’s promoting  a yuppie bike-sharing program downtown, even as someone on a bike in Dorchester shoots down two teenagers, one fatally, on a sunny Sunday afternoon on Geneva Avenue.

Menino used to understand the dangers of a long incumbency. He pledged to serve only two terms when he ran to replace Mayor Ray Flynn in 1993. The complacency and arrogance that a long tenure can breed is risky enough in a legislative body where individual power is tempered by the need to forge consensus. It is perilous in a chief executive who governs a city that, by charter, has a powerful mayor and a weak city council. It is especially destructive in a mayor as thin-skinned and prone to petty retaliation as Menino.

Consider what happened to Sam Yoon, a former city councilor with the temerity to, like Flaherty, challenge Menino in the 2009 race. Once the mayor easily dispatched him, Yoon said at the time that he somehow found himself “radioactive” and unable to get a job. After living off credit cards for months, Yoon was forced to leave town and head to Washington, DC, to find work. “He’ll die in office,” predicts Yoon, now the executive director of a nonprofit economic development alliance in the nation’s capital. “He will never leave voluntarily.”

His demurrals notwithstanding, it’s clear that Flaherty hopes a win in the at-large council race this fall will position him to run against Menino again in two years. But Boston needs a fresh start — not a stale rematch.

Surely Menino can remember the excitement of an open race for mayor. He first ran for city council from Hyde Park in 1983, the same year Mayor Kevin White decided not to seek a fifth term. White was a legendarily imperial chief executive, yet he never accumulated the kind of power Menino now wields over everything from the police department to commercial development in Boston. The city even had an elected school committee back then. Imagine.

That year, seven candidates for mayor campaigned in a raucous free-for-all that brought serious attention to such important issues as neighborhood parks and health centers. In a turnout that  looks like a misprint today, an amazing 70 percent of registered voters went to the polls that November.

Tom Menino will be 70 when his fifth term ends. He has endured two knee surgeries and two hospitalizations for a stubborn infection in recent years. He has Crohn’s disease, a chronic intestinal condition. And it’s not like he doesn’t have a life outside of office: He has been married to the same woman and lived in the same neighborhood, Hyde Park, for most of his adult life. He and Angela have two adult children and six grandchildren. He does not need this job to have a fulfilling and meaningful existence.

No one in his circle will ever tell him it is time to go. But it is.

Thankfully, there are stirrings of new political talent in the neighborhoods. Suzanne Lee, a former school principal and community organizer, did better in the preliminary council race for District 2 than two politically connected guys from South Boston. And in Dorchester, seven candidates ran in a hard-fought race for the District 3 council seat.

Those contests remind Maura Hennigan a little of the days when voters would come out for campaign rallies, when there were lines at the polls and a sense that the results were not predetermined by a mayor’s machine. “Maybe everyone couldn’t win,” she says, “but everyone had a shot. No one thinks that now.”