Unemployment remains high and foreclosures continue to be a massive problem, but for many of us the good times keep rolling. Then again, even the wealthy want a real estate deal these days. So what does it take to peddle mansions to millionaires in this market? A strong stomach. Boston's top luxury broker, Tracy Campion, is sporting a sixpack—but is that enough? 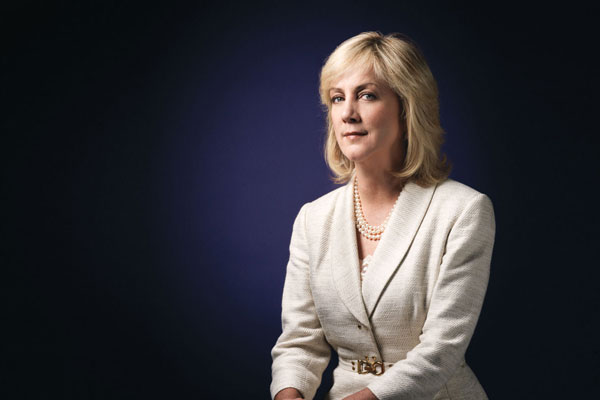 Tracy Campion digs in her bag for the keys to a pristine, $4.5 million Back Bay townhouse. It’s something she’s done roughly 15 times a day over the past 25 years, which adds up to something like 130,000 frenzied searches. Campion finally spies the set at the bottom of her purse. Juggling brochures, her phone, and a Post-It note scrawled with the home’s security code, she fiddles with the lock on the front door, then deactivates the alarm. She doesn’t have much time. Prospective buyers, a fiftysomething couple relocating from Connecticut, are on their way, so Campion sprints through the 4,000-square-foot home in snakeskin stilettos, flicking on the lights as she goes. Climbing flight after flight of Boston’s finest housing stock does have its benefits: Campion, a Diet Coke chain drinker, has the legs of a Wonderland greyhound.

“I’ve got a lot of listings at this price — houses that are perfect,” Campion says as she waits for the couple to arrive. “When you’re in the four-mil range, you can’t make little mistakes.” I look around, imagining what I’d see if I had $5 million burning a hole in my pocket, and suddenly I start to notice flaws. Though it offers critical perks like two parking spaces and an elevator, I can see how the townhouse would be a tough sell. The entryway, for one thing, is awkward. Where you’d expect to find a generous reception area with all the accoutrements of a big house — a grand foyer, perhaps a walk-in closet or a shimmering chandelier — there’s only a narrow hallway running alongside a home office. Even with its expensive built-ins and fancy paneling, the entry isn’t what you’d expect, and for most buyers, atypical means problematic. What’s more, houses like these are usually staged with furniture and accessories to make them more generic — those family photos and midwestern accents have got to go. So here we are, standing in a half-empty house with unopened mail piling up on the console, wondering when the property will hit someone’s sweet spot. But it probably won’t. At least, not with the Connecticut couple. And definitely not at this price.

Over the past 25 years, Campion has sold this particular property three times. She sells, people remember, and when they move, they call her. Name-dropping is anathema to her, but a quick records search reveals that Tom Brady bought two properties through Campion — a brownstone at 310 Beacon Street and a historical mansion at 314 Commonwealth Avenue. Just down the street, Campion rescued automotive giant Herb Chambers — who’d had his 9,000-square-foot abode at 128 Commonwealth Avenue on the market for 1,346 excruciating days with another listing agent — when she showed up with the right buyer, one with $8.75 million. And this June, she brokered the priciest condo deal in Boston history: $13.2 million for 8,000 square feet of new-construction luxury at the Mandarin Oriental. In spite of the flagging economy, in fact, as of mid-September Campion had sold $179 million worth of real estate this year, making her the number one residential real estate broker in the state. Campion’s sales are two and a half times those of her closest competitor, Beth Dickerson, who’s done $69 million.

Clearly, big-league buyers trust Campion. But Boston’s top-dog broker isn’t clad in Prada, or highly Botoxed, or precious about her manicure. She shops at Filene’s Basement. She’s got a chesty voice which, coupled with her heavy Boston accent, makes her sound one slight away from a fistfight. She moves in close when making a point, and grabs your arm hard to make that point stick.

Campion won’t talk much about what she did before she started selling eight-figure homes, other than to say she spent a lot of time waitressing, an experience that taught her to hustle. “I gave her her first job back in 1983,” recalls William Milbury of the South Dartmouth–based brokerage Milbury and Company. “She was selling ice cream makers or cable TV or something. She took to real estate like a fish to water.” Now she’s at the top of her game — happily married, with daughters at BC and Northwestern and a five-year-old firm, Campion and Company, that employs 14 people — but she’s still hustling. She doesn’t take vacations. When you’re in her presence, you can practically hear the clock ticking.

Her gutsy, assertive style seems to resonate with buyers and sellers at this end of the market — self-made men (for the most part), a few lawyers, a sprinkling of doctors — people who work hard like her and don’t enjoy getting ripped off. They take comfort in knowing that beneath that taupe linen jacket and pastel scarf lurks a street fighter, a mercenary who’ll come out swinging when someone’s trying to haggle them out of $50,000 or won’t budge on an inflated asking price. When Campion warns me to keep certain details off the record, she chases the comment with “I know where you live,” and I’m not entirely certain she’s joking. What I do know is that I want her on my side.

Campion, like her listings, never stops moving (with her black BMW SUV stuck between two trucks in the alleyway behind her office, she’s just about ready to pop someone). She’s always got to be selling, even to me. A few minutes into our first meeting, at her office overlooking Newbury Street, she asks, “Are you a homeowner?” When I answer yes, she says, “Where is all your money? Your money is all tied up in your home. It’s the most important thing to you, it’s the most important thing to most, and I don’t forget that. Whether it’s $300,000 or $30 million, it’s your whole life, you worked hard for it, and I treat it that way.”

That this is a banner year, a record-busting year, for Number One seems odd considering the country’s economic malaise. But there are certain kinds of people around here — empty-nesters, suburb-weary young families, divorcées, Europeans — who covet a piece of Boston, even when it means more stairs, less land, fewer windows, and parking torture, and they’re willing to pay for it, frequently in cash. By mid-September, the average sale price of a Campion-brokered single-family home this year was $4.87 million. The condos, which at an average of $1,160 per square foot fetched New York–like prices, were mostly in the Back Bay or Beacon Hill. Some were so private they didn’t make it on to the MLS.

That Campion has thrived where others have stumbled is due in large part to the fact that she’s no mere broker.

Tracy Campion is the matador to the city’s real estate bull market — drawing it forward, always moving, and knowing just when to jump. She doesn’t just swoop in for the big one-off scores — she plays a huge part in setting them up. Campion, in fact, is integral to almost every residential development in the Back Bay, bringing the “right” people together to make things happen the right way — the Campion way. Her territorial fervor, vision, and determination help turn potentially problematic properties into gold mines of luxury. If she sniffs out an opportunity — or, more often, gets the sense that a mismanaged development on her turf might drag down the local housing stock — she’ll weigh in on everything from the marketing strategy to the paint job. When people are smart enough to listen, who wins? Well, Campion’s bank account. Developers. And just about every homeowner in and around the 02116 ZIP code.

Campion is as much a “steward of the neighborhood” as she is a real estate broker, says Rob Silverman of Silverman Associates. Campion caught his attention back in 1993, when he’d been tasked with unloading 13 of the Back Bay properties owned by Emerson College as the school prepared for a move to the Theater District.

After working with several other agents, Silverman came to the conclusion that Campion — who at the time was running the residential division for the Boston office of R. M. Bradley — was thinking bigger and better than the rest. Eventually, he handed off all the listings to her. “She finds good matches between buyers and sellers,” Silverman says. “Each property was sold to a different buyer. She wasn’t trying to sell all [of the buildings] to two or three connections. She was trying to find the best buyer at that particular time for that particular property.” One of those Emerson deals included the sale of 132–134 Beacon to the Hamilton Company. When chairman and CEO Harold Brown bought the buildings in 2005, he was envisioning a large number of units at a lower price point. Campion talked him out of it. “Fewer units, more luxury,” she warned him. Sage counsel, it turned out. “We sold the penthouse unit as raw space for $6.5 million,” Brown recalls. “She’s tenacious. She has clear vision for what a project can be. She mesmerizes the seller down to the right price. There are few as good as her.”

Nearly two decades after the start of the Emerson selloff, Campion plays a bigger role in the doings of Back Bay real estate than ever. Consider the Bryant on Columbus Avenue, a new luxury development at the edge of Campion’s prime selling territory. The project was in trouble in 2009, owing to a combination of bad timing and branding missteps. Campion jumped in with Donald Trump’s former marketing wiz Louise Sunshine to save it. Their first move was to instruct the building’s owner, Steve Roth and his Vornado Realty Trust, to rip out the lobby. The stripped-down, loftlike rectangle just wasn’t appealing to the upscale clientele Campion wanted for the area. These days, residents are greeted by a sumptuous oval with an inlaid marble floor. From there, they zip up the elevators directly to their units. Campion also recommended changing the name to the Bryant Back Bay. The other side of Columbus is technically the South End, but who cares? Campion, in fact, made sure the words Back Bay appeared everywhere, even replacing the lobby door handles with ones that featured double B’s.

The results? In October 2009, Jason Sheftell wrote in New York’s Daily News that “Real estate history was made last Saturday in Boston’s Back Bay when up to $20 million of luxury homes in the same building were sold in less than an hour.” As one buyer put it in the article: “Considering the economic situation in this country, what these guys have done is fantastic for real estate anywhere.”