For six seasons, I witnessed — and helped spin — sports history as one of the media strategists for the Red Sox. From the petty feuds and behind-the-scenes politicking to the unbelievable championships (and gorilla suits!), I had a front-row seat to it all. 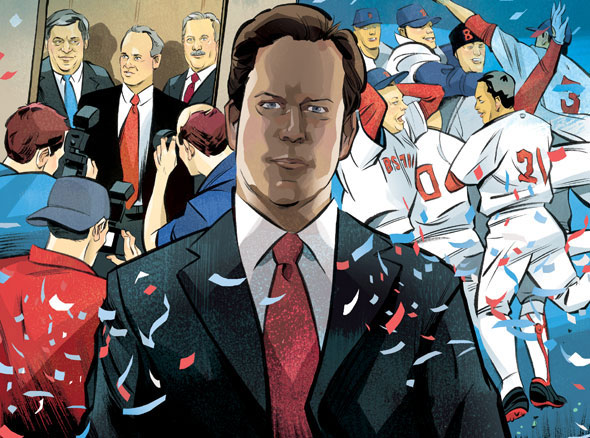 In 2001, I became one of the Globe’s first buyout babies, offered a full year’s salary and all benefits to leave the paper. After two decades in journalism, it was my intention to take the time to write my screenplay, become a rock star, or just live like a retiree for a while. Two months later, though, I was convinced to join the public relations firm Rasky Baerlein by its affable chairman, Larry Rasky. I was a little hesitant to switch to the “dark side” of PR, but Rasky dangled one especially persuasive carrot: His firm was doing work for two guys who were trying to buy the Red Sox, Les Otten and Tom Werner, and if they managed to get the team, I’d be working for the firm that repped the city’s most beloved institution.

And for the most part, that’s exactly what happened. From the winter of 2001 until the end of 2007, I was a flack for the Sox. In my capacity as senior vice president at Rasky Baerlein, I consulted with the team’s owners about their public relations and strategic communications. For a New England kid, six seasons of reporting to Fenway Park each morning kept me in a constant state of exhilaration. I was the envy of colleagues and family members. I had a badge that gave me total access to Fenway Park at any time. I was present at nearly every major Sox milestone in the first six years of the new millennium — including two World Series. I was on a first-name basis with the top executives and sometimes rubbed elbows with players. Though I tried to maintain some semblance of professional behavior, most of the time I was just thinking: “How the fuck did I get here?”

Those days have been running through my mind quite a bit lately, now that there’s so much turmoil swirling around the club again. Francona’s gone. Theo’s gone, supposedly driven out by a meddling Larry Lucchino — who, if the rumors are to be believed, then turned around and threw Theo’s replacement, Ben Cherington, under the bus by rejecting his choice for a new manager. It’s been quite a while since I’ve had any knowledge of the goings-on over there on Yawkey Way, but I tend to doubt it all went down like that. I got to know these people pretty well over the years, got to see them at their best and their worst, and if there’s one thing I learned, it’s that when it comes to the Boston Red Sox, nothing is ever as  simple as it seems.

I started at Rasky Baerlein on Tuesday, September 4, 2001, assigned to help build a crisis communications practice. For exactly one week, things were pretty slow. The Tuesday after I started, though, was 9/11, and the next thing I knew I was reviewing security contingencies for the giant LNG tanker that Mayor Menino felt was a terrorism target; writing a crisis plan for a junk-mail company whose business was threatened by the anthrax scare; and consulting with several other organizations whose crisis-planning policies were suddenly sorely lacking.

Rasky may have lured me with promises of the Red Sox, but it was turning out that my involvement with the group trying to buy the team was minimal at best. Thankfully, that changed pretty quickly. Because of my newspaper background, I was wrangled one day to help “media train” Les Otten, a guy I eventually got to know a little and like, but who needed some polishing as he prepared to make the case that he and Tom Werner were credible buyers for the Sox. Otten was essentially a ski bum who’d done well and bought a string of New England ski resorts in a novel quest to consolidate and conglomerate that fractured industry. Successive snowless seasons had all but ruined his plans, however, and shares in the company had fallen below $2.

Otten and Werner’s plan to buy the team took an abrupt turn when the bidding price went from around $300 million to $700 million, an amount beyond the financial wherewithal of both men. That’s when corporate titans John Henry, Larry Lucchino, and the New York Times Company entered the scene, eventually overshadowing the original Werner/Otten group. They wound up getting the team, of course, but Otten’s role was severely diminished. His sometimes-clumsy attempts to involve himself in team governance — arriving uninvited for management meetings, and even showing up at spring training in full Red Sox uniform to take grounders from Johnny Pesky — made him persona non grata, and his eventual severance from the team was awkward and a bit messy. That was unfortunate. The world needs dreamers, and Otten dreams big. 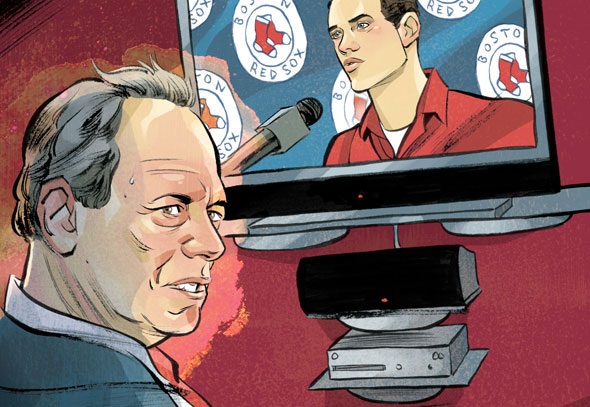 Anyway, it’s hard to believe now, but Henry, Werner, and Lucchino were pariahs in Boston when they first showed up in town trying to buy the Sox. (Maybe it’s not so hard to believe, actually, considering recent events. The worm can turn pretty quickly around here.) The press at the time treated them like foreign interlopers with no understanding of New England tradition and culture. I personally couldn’t understand why the media were lining up behind a local hot dog vendor (Joe O’Donnell) or a parking lot baron (Frank McCourt) instead of these experienced baseball heads — especially considering that what was now known as the Henry group was the only bidder for the team promising to preserve Fenway Park. Then again, I did  have an interest in them getting the club.

Sometime around Thanksgiving in 2001, with Henry, Werner, and Lucchino reeling from the carpetbagger charges, Larry Rasky called a meeting to strategize what we could do to emphasize the fact that there were also local people in the bidding group. Lucchino, who undoubtedly was taking signals from baseball commissioner Bud Selig, had asked Rasky to come up with a plan to showcase high-profile local participants such as Arnold Worldwide CEO Ed Eskandarian, former Maine Senator George Mitchell, and TJX CEO Ben Cammarata. Someone came up with the idea of putting everyone on a bus and driving them around town, stopping off at select tourist attractions so the media could photograph and interview the outsiders mingling with the locals in the group. It was a terrible plan — I could envision Dan Shaughnessy pointing out that these guys couldn’t even find Fenway Park without a Magical Mystery Tour guide.

So I offered an alternative: Set up the prospective owners in a hotel room downtown for some supposed meeting, then leak it to the press that should they park their cameras in the hotel lobby at, oh, 5:40 p.m. — after the Patriots game — they just might catch the bidding group emerging from an elevator and be able to buttonhole them with questions. The tactic worked beautifully. Without a news release or official announcement, every TV station, print outlet, and even some radio stations covered the “meeting.” Exiting the elevator with the newly enlisted local partners, Lucchino surveyed the phalanx of cameras and reporters and whispered, “I heard you were good, Rasky. I didn’t know you were this good.” That shot ran on the 6 p.m. and 11 p.m. news that Sunday and most of the next day — the day that the final Red Sox bids were due to be submitted to Major League Baseball.

With the Henry/Werner group prevailing, Rasky Baerlein became the official PR outfit of the Boston Red Sox. Our first major assignment was to help set up visits by the new owners to the other New England states, where we would hold rallies, introduce them to the fans, and meet with local officials, pols, and business leaders. At each stop, we’d give away jackets, balls, hats, pennants, and trinkets. One day, I got an idea for another souvenir while roaming around Fenway. I noticed a pile of 50-pound bags of crushed brick stacked against the walls in the tunnel between the Sox dugout and the clubhouse. I asked a groundskeeper what they were. “The warning track and the infield,” he said, like it was one of the dumbest questions he’d ever heard.

It turns out that Fenway dirt isn’t dirt at all. In the infield, it’s a substance called “Turface,” a brick-red clay material that Henry had ordered to match the color of the crushed brick that makes up the warning track in the outfield. I brought this up at a meeting, and we landed on the idea of giving away little plastic bags of the stuff, labeling it authentic Fenway Park infield dirt. “Dirt,” Lucchino said, twisting up his face. “We’re going to give our fans bags of dirt?” His reaction seemed to sink the notion right there. But on the next trip, to New Hampshire, we brought along about 100 little bags of the dirt — which of course had never been closer to the Fenway infield than the dugout. But that didn’t matter. The bags disappeared the instant they were shown off to the admiring crowd. On our next trip we packed even more bags, but ran out just as fast. The enthusiasm and rabid intensity of fans throughout New England defied logic and clearly awed the new owners, who were realizing first-hand what everyone in the league had told — or warned — them: It’s different in Boston.