When it comes to presidents, is it what comes out of their mouths, or how those mouths are shaped that gets them elected? 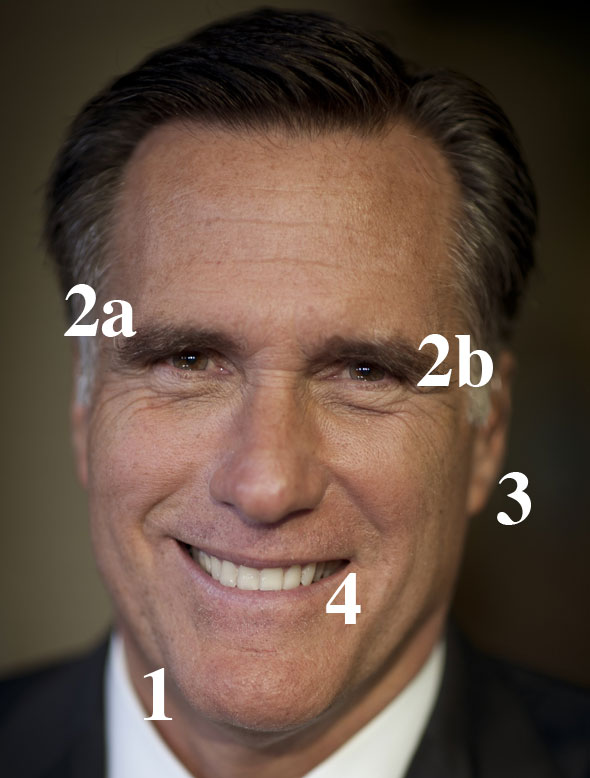 Popular wisdom has it that the fastest way to a voter’s support is variously through the mouth, wallet, or ears. But really, the eyes might be best: Everyone’s constantly sizing one another up, says Mac Fulfer, author of Amazing Face Reading and one of the nation’s foremost experts on the subject. In the case of presidential candidates, Fulfer says, we’re looking for warrior traits, evidence of someone who will “fight for us.” If he’s right (this “science” has its critics), you’re better off watching campaign commercials on mute. Here, Fulfer interprets the mug of Mitt Romney.

1. Chin
Here’s how to evaluate who’s going to win” Fulfer says. “It’s the guy with the biggest chin.” Governor Rick Perry’s chin is “like a maul,” but Romney’s sticks out. “It gives him the capacity in almost any situation to get the last word,” Fulfer says.

2. Eyes
2a. Eyebrows > Low, even eyebrows indicate quick thinking: “Mentally, he can be intimidating, because you get him a proposal and his brain jumps from A to Z,” Fulfer says. At Bain Capital, Romney’s penchant for process helped generate billions of dollars, and this trait forms the backbone of his CEO-as-president campaign. Here in Massachusetts, it also gave us Romneycare.
2b. Eyelids > “His eyelids are covered up by the eyebrows,” Fulfer says. “That’s the same problem Gore had — seeming wooden or unapproachable.”

3. Ears
Plastered to the side of his head, Romney’s ears show he listens to consensus (as in chairing the Salt Lake Winter Olympics) rather than believing unquestionably in his own gut. That might explain his serial flip-flopping.

4. Lips
A thin upper lip and slightly fuller bottom lip mean “emotionally, he’s a little guarded,” Fulfer says. “He’s much better at talking about what he does than how he feels.” File Romney’s seldom publicly discussed Mormonism here.