How do you make a natural disaster in a developing nation even worse? Send in the relief workers. Now Harvard's Michael VanRooyen wants to change all that with an innovative program that uses satellite technology and tactics borrowed from the military to turn out a new breed of super-humanitarians. 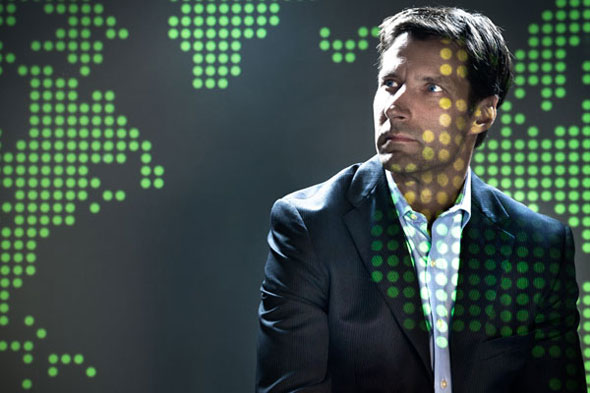 Taking the dais at an unusual conference in Harvard Square, Michael VanRooyen is dressed immaculately in a royal blue shirt and gold tie beneath his white coat. He’s handsome in a Clark Kent sort of way, with a square jaw and piercing blue eyes. And he’s got a superhero résumé, too. VanRooyen’s travels to Zaire in 1996 included having an AK-47 shoved in his mouth and being held hostage for days by soldiers who were convinced he was a CIA operative. During the El Salvador civil war, he worked with the Maryknoll priests, who were targeted by death squads. He followed Tutsi rebels on their campaign to stop the genocide in Rwanda, taking over the administration of a blood-soaked hospital in Kigali where thousands of victims had been buried on the institution’s grounds. He was in Somalia during the “Black Hawk Down” episode, in Sarajevo during the Balkan wars, New Orleans for Katrina, the World Trade Center site after 9/11, and has spent time in southern Sudan and Darfur.

VanRooyen, in other words, just may be the world’s most dashing example of what can loosely be thought of as a career humanitarian. The Harvard professor’s exploits have inspired legions of followers to dedicate themselves to helping right the political, military, and environmental wrongs of the world. He’s not the only idol, of course. The field is glamorized by crusading journalists like the globetrotting New York Times columnist Nicholas Kristof (who has more than 1.2 million Twitter followers) and mega-stars like Bono, Brad Pitt, and Sean Penn — mavericks in dark sunglasses and shaggy hair who are taking action, getting things done their way, and telling governments where they can stick their bureaucracy.

Crisis relief, in turn, has become irresistibly sexy to a generation of young adults brought up with instant access to vast amounts of information, much of it alarming. Many of today’s kids want to right the world’s wrongs, and they want to do it fast. And the quickest way to get to the action is to sign up with a humanitarian organization. Global aid, in fact, is now a $160-billion-a-year industry that employs 240,000 people in thousands of organizations providing services in more than 100 countries. In response, universities are scrambling to offer global health programs aimed at preparing students for the intricate life-or-death situations they’ll face on the ground. More than 200 U.S. colleges offer such courses, and enrollment has almost tripled over the past five years.

Which, VanRooyen explains to the academics at the conference, is pretty much the problem.

There may have been a time when providing aid was as simple as lending a hand where it was needed, VanRooyen says, but in this age of the 24-hour news cycle, advanced surveillance technology, and increasingly media-savvy bad guys, modern relief workers need more than good intentions. Every humanitarian endeavor is now fraught with political, financial, and health consequences, yet, he says, there are too many schools pumping out insufficiently trained humanitarian grads. These days, we can quickly mobilize vast numbers of people to crisis areas, but once on the ground, those same people can actually make the disaster worse.

For a prime example of this problem, you need look no further than Haiti, the poverty-stricken nation that suffered a massive earthquake in 2010. After the quake, nongovernment organizations rushed in to offer $9 billion in aid. They brought food, money, search-and-rescue services, and medical teams. To coordinate the efforts of 420 health organizations alone, the United Nations employed a freshly designed “cluster” system, but for the most part it was chaos. In one case, earthquake victims had their limbs unnecessarily amputated by disaster responders who lacked medical training. Even more distressing was that with most organizations focusing their efforts on the city of Port au Prince, few were looking out for the growing threat of a cholera outbreak in the countryside, where much of the population had fled. Despite the huge influx of money and workers, no one had the jurisdiction, interest, or know-how to implement a plan that would address this important issue. So in the end, lack of sanitation caused the deaths of 6,500 people and sickened half a million more. 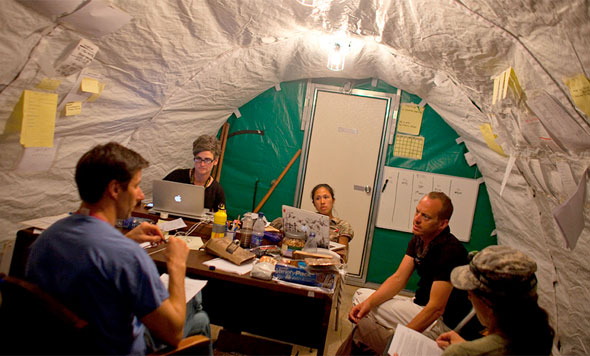 Michael VanRooyen and colleagues meet inside the incident command tent at a field hospital in Haiti after the devastating 2010 earthquake. Photo by Justin Ide/Harvard University

VanRooyen has seen all of that and more during his decades working in emergency medicine and global health. It was the industrywide tunnel vision, demand for quick results, and lack of long-term planning that led him in 2005 to cofound the Harvard Humanitarian Initiative (HHI) with Jennifer Leaning. The multi-school program combines data-driven research, new technology, and fieldwork into a single academy designed to build a better humanitarian.

But the problem, VanRooyen tells the conference, which is made up of representatives from 12 other universities that have humanitarian health programs, is that it’s not enough for the nation’s various colleges, however well intentioned, to work in isolation. Right now, he says, there is no centralized humanitarian organization, no agreed-on standards and best practices, no single entity overseeing all the programs.

“How do we handle this crush of students who want to travel and see the world and get shot at but still come home safely, and help them do it in a mature and responsible way?” he asks.

His solution is to get all the programs to join ranks, to establish a new set of global protocols. He wants to do this because he’s well aware of how things fall apart.

In the past few years, journalists, relief workers, and diplomats, alarmed by what they’ve seen, have begun calling for better coordination, training, and oversight among humanitarian organizations. Besides natural disasters like the one in Haiti, civil wars, ruthless dictators, oil money, and geopolitics are all factors that can warp efforts to help. In her book, The Crisis Caravan: What’s Wrong with Humanitarian Aid?, the Dutch journalist Linda Polman argues that when humanitarians bring money and media attention into a politically charged region, they can actually exacerbate the violence. When they try to maintain neutrality in the face of atrocity, aid workers become easy pawns, ripe for manipulation by the nefarious forces that brought them there. In a review of Polman’s book, New Yorker writer Philip Gourevitch — famous for his reporting of the Rwandan genocide — observes that “moving from mess to mess, the aid workers in their white Land Cruisers manage to take credit without accepting blame, as though humanitarianism were its own alibi.”

VanRooyen takes issue with parts of Polman’s book, believing that she leans too heavily on her own observations rather than use evidence-based methods. But he doesn’t deny her basic argument: Organizations that take in hundreds of millions of dollars after a major disaster in the end are accountable only to their donors. “The model,” he says in his third-floor Brigham and Women’s office the day after the conference, “does not encourage coordination, analysis and research, or ultimate outcomes.” In other words, there is a cost to business as usual. In many of the countries in which he’s worked, that consequence is calamity.

But VanRooyen believes this can change. As both an educator and a model for the global relief worker, he thinks we can develop critical thinkers who will lead the movement in a better direction. And he wants all the programs to join ranks, create a deep and broad curriculum, and help define the 21st-century humanitarian.

VanRooyen set up the Harvard Humanitarian Initiative (HHI) to develop a brand-new tool kit and train people who can use it. HHI researchers, for example, wanted to figure out how emergency aid providers could prepare for a crisis in an unmapped, overpopulated slum. Many of these densely built communities (which are growing rapidly in developing nations worldwide) sit on lowlands — making them essentially defenseless against flooding. Without maps or demographic information, crisis responders come into flooding emergencies completely cold. Imagine New Orleans after Katrina, but without the evacuation, without streets wide enough for boats, and without navigation tools. How do you know where you are and how to get where you need to go? Using Nairobi as a model, the HHI is developing a prototype map that would provide the information emergency responders might need. Instead of just charting out roads, in other words, their model would identify the vulnerable populations, resources, and potential safety zones. It is the HHI’s hope that these maps can be used to predict the most effective methods to help such poor, densely settled regions before a crisis occurs.

HHI researchers are also looking at the more granular issues. Their Women in War program documents how social instability and violence affect a population, and how women can be agents of social change in a society. Through HHI’s Program on Humanitarian Effectiveness, faculty from diverse backgrounds apply quantitative analysis to past crisis responses, evaluating their performance and coming up with better approaches for the future. And each year, the HHI holds its Humanitarian Action Summit, at which more than 60 major agencies share best practices and tackle emerging issues.

All of this research and development is designed to support both people in the field and the new crop of humanitarians. It’s on the latter group that VanRooyen pins his highest hopes. He’s developed a revolutionary series of courses, which offer Harvard and Tufts students an education in all aspects of disaster response — from water and sanitation to logistics, healthcare to transportation. It’s startlingly hands-on. Each spring, students simulate a humanitarian crisis, combining a Darfur-like battlefield — complete with land mines and child soldiers — with a simulated flood. In so doing, they practice humility in the face of extreme stress, a necessary skill if you want to survive such conflicts. They’re joined by staffers from 10 humanitarian organizations — approximately 200 in all — to track down “displaced populations” in the Harold Parker State Forest in North Andover. During the summer, students conduct fieldwork in Lebanon, the Democratic Republic of Congo, or post-quake Japan. The goal is for them to emerge from the program as fully functioning critical thinkers in the field, ready to dig a pit latrine, negotiate a roadblock, or use international law to identify human rights abuses.

In some ways, you could say the HHI is using military-like tactics to build a newer, better humanitarian force. They’re centralizing the system, conducting rigorous research and development, and putting their recruits through boot camp. They even have access to a surveillance satellite — financed in 2010 with seed money from the actor George Clooney — which they’ve been using to track potential crises before they happen. Called the Satellite Sentinel Project (SSP), this arm of the HHI operates in near-real time, analyzing images taken only a few hours earlier. With this capability, they can go beyond merely recording evidence of crimes already committed and perhaps prevent them from happening in the first place.

Isaac Baker, 32, is part of the 14-member SSP team (four staffers and 10 interns) monitoring the fighting in Sudan via satellite from a nondescript office on Story Street in Harvard Square. On a brisk Thursday morning in early November, he hunches over his keyboard and opens Google Earth Pro, then scrolls over the screen, clicking his way to a small, light-brown strip that overlays the village in question. As a branch organization of the HHI, the SSP is trying to deter human rights abuses before they occur in Sudan, the location of Africa’s longest-running civil war, which has killed an estimated 2.2 million people.