The Evolution of Davis Square

Green Line extensions won't inspire mini-cities overnight — it took Davis Square more than 20 years to get where it is. 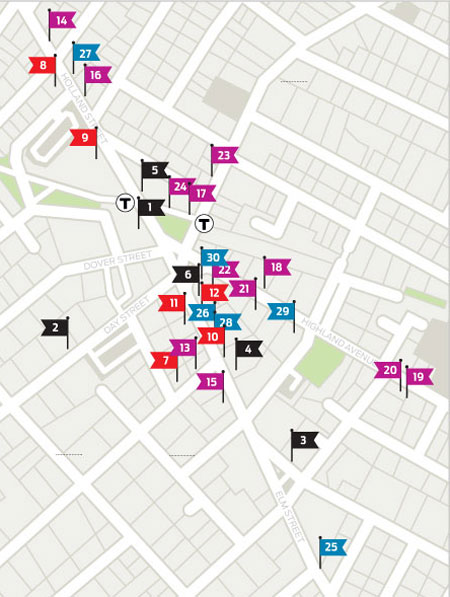 With all the talk of how the Green Line extension would spur development in Somerville and Medford, it’s easy to imagine the mini metropolises that might sprout up. But don’t expect an instant miracle: Davis Square got its T stop in 1984, but it took a couple of decades for it to grow into the hip ’hood it is now. Here’s a look at how that scene came to be.

THE PIONEERS: 1985–1999
After the Red Line was extended to Davis Square in 1984, restaurateur Robert Gregory saw an opportunity in all the new foot traffic and opened the barbecue joint Redbones in 1987. In 1990, Harvard Vanguard unveiled a medical center, which drew a host of new visitors.
7 Redbones
8 Nellie’s Wildflowers
9 Harvard Vanguard
10 The Burren
11 Joshua Tree
12 Diesel Café

THE NEWBIES: 2010–today
The openings of Posto (2010) and Foundry on Elm (2010) signaled the introduction of high-end (despite the economy). Best before-and-after shot: Last year, Found, a consignment shop loaded with designer digs, opened a block from Goodwill.
25 Posto
26 Foundry on Elm
27 The Boston Shaker
28 Found
29 Five Horses Tavern
30 Bike Boom