Known for its flawless natural-fiber rugs, local company Merida Meridian teams up with designer Celerie Kemble on its coolest collection yet. To say Celerie Kemble always had an appetite for Merida Meridian rugs is putting it mildly. “I was a voracious consumer of their products,” she admits. And while the acclaimed interior designer, president of the New York office of Kemble Interiors, can’t ­remember precisely how she went from a top buyer of the Boston-based company’s custom rugs to a full-fledged ­collaborator, she says the company’s pitch probably went something like this: “Thanks for all the orders! Think it’s time we worked together?”

It’s a good thing they did. The hotly anticipated Celerie Kemble by Merida line is set to debut this spring, featuring floor coverings in Kemble-approved (and often Kemble-designed) patterns that incorporate unexpected colors and textures. Both she and Merida creative director Maegan Fee, who studied textile design at the Rhode Island School of ­Design, were intrigued by the idea of bleeding colors—something you see in watercolor paintings and ikat prints—within a rug design. After much brainstorming, Fee and Merida’s product-design technician, Martin Emlein, began experimenting with weaving techniques on the looms and robotic tufting machines in the company’s Fall River textile-design studio to achieve the look.

And as they mulled the possibilities, inspiration sprung up everywhere. “In some cases there were [Merida] designers who had been working on personal projects,” Kemble explains. “They’d say, ‘I’ve been chewing on this idea for a while. What do you think?’ And I’d say, ‘I love it! Let’s look at some ways we can make it work.’” Other patterns were inspired by drawings or photographs of things Kemble had discovered while traveling the world. The weirdest thing she brought in? “Vintage trivets that I bought on eBay,” she says with a laugh. To her delight, the resulting patterns are in the works.

It’s clear this is no mere revenue-generating partnership, though given the natural synergy between the designer and the company, it’s hard to imagine the co-branded product line won’t be a smash hit. Kemble has always had a thing for the kind of natural-fiber rugs that Merida does best. “I like natural, low-key, texturally beautiful carpets,” she says. “I use a lot of sea grass and sisal. These materials achieve the highest level of elegance with the least pretense.” And when it came to designing a collection of rugs, “having an opportunity to work in the natural materials I ­prefer, and the ability to work with wools rather than synthetics, was ­appealing.”

While some of the products will be fairly neutral—think of them as “supporting actors” in a design scheme, Kemble explains—the line will also explore more-fashionable colors and bolder prints that could take a central role in a room. But no matter what, they’ll be ­versatile, she says. Merida’s rugs are known for ­being highly customizable, and the new line is no exception, as patterns will be offered in diverse colorways.

Of course, Kemble’s involvement goes deeper than just consulting on aesthetics. Prior to this ­collaboration, she had lent her design expertise to businesses ­producing high-end furniture, ­textiles, and wall-­covering products. But her partnership with Merida, a company that’s as focused on the production process as the result—not to mention a leader in social responsibility—may be her most enlightening to date. “As someone who works with pattern, I always assumed a design is woven as it’s drawn,” she says. “It’s much more complicated than that.” And her appreciation for the art of weaving has only grown as she’s spent time in Merida’s Fall River plant, which produces on average 5,000 square feet of unique floor coverings per day for boutiques such as Landry & Arcari and ABC Carpet and Home in New York. “I love learning about the craft that goes into the pieces that I use,” she says.

Will there be more collections to come? “I can’t imagine this being a one-off,” she says. And why should it? Sustainable, elegant design is a craving that won’t go away. 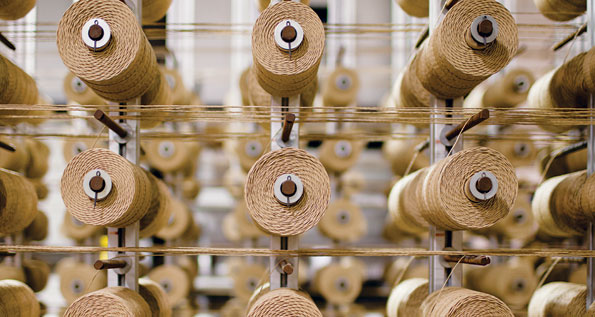 Spools of yarn are fed into a dobby loom in Merida’s Fall River production facility. A craftsman uses a hook needle to handstitch a mitered corner. A robotic tufting machine creates a striped wool rug, one color at a time. Fee at a hand loom, where she experiments with new designs. 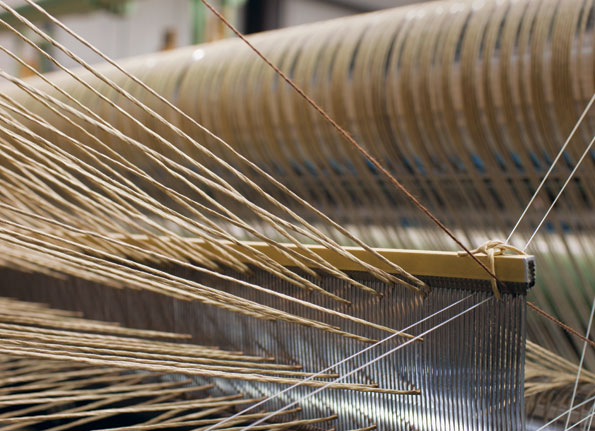 Yarn is pushed through a dobby.