It's time Boston quit wasting money on student transportation and started investing it in, you know, education. Is Mayor Menino ready to do what it needs? 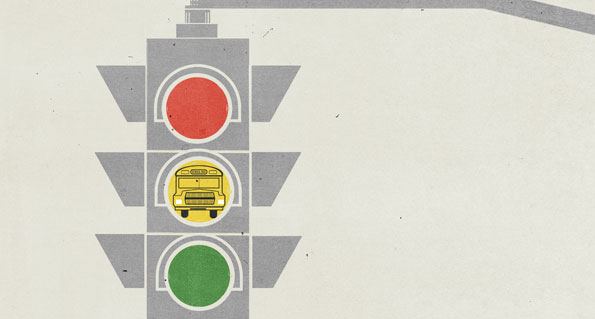 Back in October, Mayor Menino and Boston parents were outraged when a school committee hearing revealed that 25 percent of school buses were delivering students late to school. A large number of our kids weren’t making it to class on time, not because they were goofing off, but because their school-provided system of transportation wasn’t getting them there. Most of the blame was placed on problems with a new GPS system on buses, but that obscures a more-fundamental issue: This city’s school-assignment system is so complex — involving a spider web of stops and routes spun all across town — that even Mario Andretti couldn’t get a bus to school on time.

[sidebar]Most communities, especially suburbs, assign their students to a particular school based on one thing: a kid’s street address. BPS, though, has divided the city into three enormous zones — North, West, and East. The East Zone, for example, extends from Hyde Park to South Boston, and includes more than 25 elementary and K–8 schools. Your child can take part in a lottery to enter any one of them. (High schools aren’t placed in zones — they’re citywide.) It’s true that if choice is the sole priority, the system is great: Kids can bypass a lousy neighborhood school in favor of a better program on the other side of their zone or, in some cases, across town. The problem, though, is that providing that choice translates into huge transportation costs — and long bus rides.

BPS spends roughly $80 million per year, or nearly  10 percent of its overall budget, on transportation. And that number is projected to eclipse $100 million by the 2015 fiscal year. Then there are the nonmonetary costs — late arrivals, less time for homework and extracurriculars, and just the fact that it’s harder for parents to be involved in the schools their kids attend.

Educational choice is important, but there’s a balance to be struck between offering it and creating a system of such complexity that it needlessly drains resources. Dividing a traffic-jammed city of almost 50 square miles into just three zones and expecting buses to arrive on time is a dicey proposition, one that’s left us spending a disproportionate amount of education dollars on buses, not classrooms.

It’s Boston’s troubled busing history, of course, and the related topic of race that make people leery of getting into the whole school-assignment issue. The court-mandated busing of the ’70s came with ugly riots and violence that cast the whole city in a bad light. Any suggestion of changing the school-assignment system understandably stokes fears of a resegregation of our schools. But here’s the thing — resegregation simply isn’t going to happen. Consider the numbers: In 1970 BPS had close to 97,000 students, and 64 percent of them were white. By 2010, only 56,000 students were in the system, and just 13 percent of them were white. And out of more than 125 schools today, only three are majority white. The potential for resegregation should be monitored, but it shouldn’t drive our current decision-making.

So what changes should we make? There’s a constituency that wants to scrap our entire assignment system and revert to “neighborhood schools.” Just like in the suburbs, students would be assigned to schools based on their address. Kids from J.P. would go to schools in J.P., South End in the South End. The major problem with that approach is that BPS schools vary widely in quality, meaning you’d be punishing students who live in areas without access to high-quality schools. There are also not nearly enough classroom seats in certain areas with large numbers of students (like Dorchester), meaning BPS would have to build more schools or bus some students to neighboring areas.

So a full-on neighborhood system isn’t practical or politically possible. But it’s clear that we do need to move beyond our costly three-zone system. In 2004, with the support of the mayor, superintendent, and school committee, the Student Assignment Task Force solicited public opinion on changes to the current arrangement. A majority of that group proposed the creation of six elementary school zones across the city. The benefit of more, and smaller, zones was clear: Buses would need to drive fewer miles, which would save both time and money. But no political consensus emerged on the matter, and the whole thing fell flat.

The subject lay largely dormant until Menino’s 2008 State of the City address. “I believe that we can rethink our school-assignment zones,” he said at the time, “continue providing children in every neighborhood with access to high-performing schools, and save up to $10 million of transportation costs.” The following year, BPS Superintendent Carol Johnson proposed a five-zone plan for elementary and middle schools. But a public backlash arose — much of it focused on concerns about resegregation and the concentration of low-performing schools in particular zones — and Johnson quickly abandoned the idea. She continues to talk about the issue, though, pledging vague “changes to school choice” for the 2013–2014 school year. Last month, Menino once again raised the issue in his State of the City address, promising a “radically different assignment plan — one that puts a priority on children attending schools close to their homes.” Nice words, but the specifics of this newest plan have yet to be released.

The fact is, the Student Assignment Task Force majority had it right back in 2004, when it recommended six medium-size zones. That would greatly reduce busing expenses while allowing for continued access to a broad choice of good schools. Now we just need to figure out how to get that plan implemented.

The answer, of course, is Mayor Menino. He is the alpha and omega of political reform in this city — of political anything, really. Having dominated in the past few elections, he’s politically unassailable. He’s also well liked by people living in minority communities, who are understandably reluctant to embrace any new top-down initiatives after decades of “reform” that have only resulted in persistent underperformance in many schools. Unlike the last time there was an attempt to increase the number of zones, a hands-on, vocal Menino can be the difference.

Despite all the benefits from a newly zoned system, some parents will remain skeptical of any reduction in choice. If Johnson and Menino want to sell the new plan, they need to introduce parents and students to all the options, including charters and less well-tested models like pilot, innovation, and turnaround schools. If they aggressively promote the education choices available, they just might be able to temper the justifiable concerns about the smaller zones.

Of course, changing up the zones doesn’t mean BPS can dial back any focus on improving poor-performing schools. Every school needs to be better, and zone reform can help achieve that goal, too. Instead of on buses, we’d be able to spend money where it actually matters: on education. And maybe we could even get our kids to school on time.