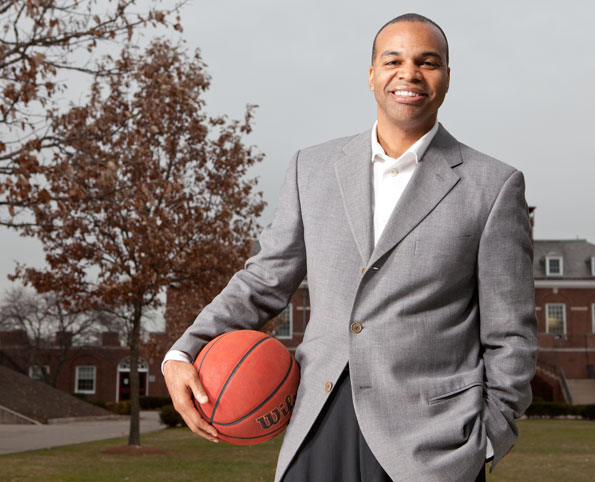 ON A GORGEOUS OCTOBER afternoon, with the sounds of K’naan’s “Waving Flag” pulsing inside Lavietes Pavilion — out of darkness, I came the farthest — the Harvard University men’s basketball team did something it had never done before. With some 400 people in the stands, many of them fans, but also a fair smattering of curiosity seekers, a red Ivy League Champions banner with black piping and large white letters reading “2011 Men” was unveiled at the southern end of the arena. It joined 11 others that were already there — banners celebrating accomplishments by the women’s team.

[sidebar]As the wrapping on the championship flag was removed and allowed to descend slowly to the floor, the fans rose for a 45-second ovation while the players and their coach, 46-year-old Tommy Amaker, stood watching stoically from the sideline. They did not celebrate. Amaker, understated and private by nature, simply thanked everyone for coming. “We appreciate your support,” he said. “We’re looking forward to a wonderful season.”

At many campuses across the country, basketball season opens with Midnight Madness, a ritual of autumn when teams officially begin practice for the upcoming season at 12:01 a.m. on the first day the NCAA allows. Students fill the stands, getting revved up by the band, cheerleaders, and, perhaps, other stimulants. Then at midnight, the players burst onto the floor amid deafening noise and entertain the crowd with thunderous dunks, no-look passes, and the like.

Shocking as it may seem, the Ivy League in general, and Harvard in particular, hasn’t really embraced Midnight Madness. This is, after all, a league that has no athletic scholarships or post-season tournament, and that plays its league games on Fridays and Saturdays so as not to interfere with students’ more important pursuits. Two years ago, on the first day the players were eligible to practice, the Harvard team instead attended a ceremony honoring U.S. Education Secretary Arne Duncan, an alum and former hoopster. Dubbed “Crimson Madness,” this year’s celebration was a first for Harvard — though it was held in the afternoon, some 16 hours after midnight, and was delayed by a day in deference to the universitywide celebration of Harvard’s 375th birthday.

“It’s Harvard,” Amaker says. “We do things differently around here.”

Amaker, too, is doing things differently. Harvard has qualified for the NCAA Tournament — what we today call March Madness — exactly once: back in 1946, a decade before the Ivy League was founded. In more than a half-century of official Ivy League play, Harvard’s best finish in men’s basketball had been a pair of second places. Until last season, every school in the Ivy League had won or shared at least one conference basketball championship — except Harvard.

But Amaker, now in his fifth season at the school, has quietly gone where no Harvard basketball coach has gone before. His teams have set and then reset school records for victories in a season. They’ve turned Lavietes Pavilion into a charnel house for visitors while selling out virtually every game. They’ve begun beating nationally ranked opponents. Amaker’s first recruiting class was judged among the top 25 by ESPN, unprecedented not only for Harvard, but also for the entire Ivy League.

And this year, in yet another first, Harvard found itself ranked in the top 25 by both the Associated Press and the ESPN/USA Today Coaches polls. That came after the Crimson, despite having a roster loaded with seven freshmen, won a Thanksgiving tournament in the Bahamas that featured two top-25 teams, Connecticut and Florida State. Harvard also beat Boston College for the fourth consecutive year, with all of those victories coming at BC’s Conte Forum.