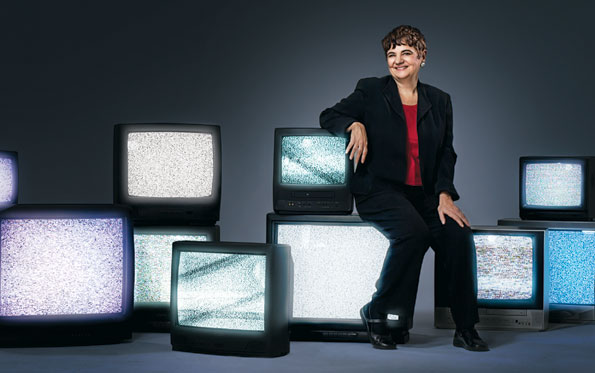 SUSAN LINN IS A HARVARD Medical School instructor of psychiatry, the author of two books, and one of the country’s leading experts on how marketing and television exposure affect children. and right now, addressing a roomful of concerned parents at a nursery school in Lincoln, she’s got her arm jammed halfway up a puppet of a duck named Audrey. The duck, with its thick yarn braids and button eyes, cranes its neck to get a look at the room, while Linn’s face is frozen in a tooth-clenching grin. “Susan,” says the puppet, the voice seeming to emanate from nowhere, “what are we doing here?”

[sidebar]Linn, an award-winning ventriloquist who in her younger days performed everywhere from the streets of Boston to the set of  Mister Rogers’ Neighborhood, today runs the tiny but hugely influential nonprofit Campaign for a Commercial-Free Childhood. The CCFC, as the group is known, is concerned with two overlapping issues: the amount of time children spend in front of an ever-growing array of screens — TVs, computers, smartphones, tablets — and the marketing messages they are subjected to while glued to them.

Under Linn’s direction, the group has taken on some of the biggest and most powerful corporations in the world. It forced Kellogg to remove SpongeBob SquarePants and other cartoon characters from the packaging of foods that were light on nutritional value. It got Hasbro to shelve plans for a new line of dolls based on the sexpot pop act the Pussycat Dolls (“Don’t cha wish your girlfriend was hot like me?”) that made Bratz dolls look like fat prudes. (If you aren’t familiar with Bratz dolls, by the way, they’re the ones that make Barbie look like a fat prude.) And when Linn found out that a Needham company called BusRadio was airing advertisements on school buses, she organized a campaign that led to the demise of the business.

Then there was the CCFC’s action last spring against Scholastic, the world’s largest publisher and distributor of children’s books, and home to such beloved characters as Clifford the Big Red Dog and Harry Potter. Scholastic was distributing fourth-grade learning materials that outlined various sources of power, placing a special emphasis on the virtues of coal. It turned out that the coal industry had paid for and developed the whole thing. “In these materials there was not one mention about coal’s negative impacts,” Linn says. “However you feel about coal, there needs to be both sides in teaching materials.” So she launched a campaign against Scholastic — an action that was covered the very next day in the New York Times. The day after that, the paper wrote an editorial chastising the company. And the day after that, Scholastic announced it was dropping the curriculum. But Linn didn’t stop there. She partnered with the website Change.org to get more than 56,000 people to write to Scholastic demanding that it rid itself of all corporate-sponsored teaching materials. In August, the company announced it was dramatically scaling back on them.

All of which has made Linn a hero to concerned parents and prominent academics across the country. “She is very strategic in the targets she picks and very principled in pursuit of efforts to try to mitigate commercial exploitation of children,” says University of Arizona professor of communication Dale Kunkel, who is a psychologist and leading researcher in the field. Anne Deysher, a grandmother and former preschool teacher who lives in Westborough, was so impressed with Linn that she became one of the CCFC’s 48,000 members. “She is a voice in the wilderness,” Deysher says. “It is very courageous to step up with such passion and well-informed ideas and try to make waves in the face of such daunting opposition with such incredible resources.”

It’s true that Linn has made a kind of habit of taking on, and besting, corporations with vastly more resources than she has at her disposal. But that’s not to say that there haven’t been a few repercussions along the way. In fact, one fight she picked — against the mammoth Walt Disney Company and its wildly popular Baby Einstein line — nearly cost her everything she’d spent her career building.