Game On! Clash of the Masschusetts Casino Titans
Subscribe
Follow
I'm a scraper
This search result is here to prevent scraping

Game On! Clash of the Casino Titans

The high-stakes, high-roller tug of war to build our casino.

Considering that Massachusetts invented gerrymandering, our pols kept the casino geography surprisingly simple. The new gaming law splits the state into three zones: Region A in the east (from Boston to Worcester), Region B in the west (that netherworld beyond whatever’s beyond Worcester), and Region C in the south (around the Cape and South Shore). The law also authorizes a slots parlor, which can go anywhere, but each region can have just one casino. In the end, the fates of Suffolk Downs and Foxboro may well be tied to just where that slots parlor and the other casinos wind up. 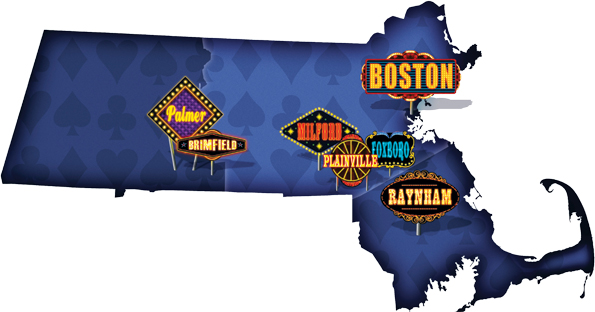 One of Suffolk Downs’s biggest advantages may  be its location — not just that it’s in Boston, but that it’s not in the southern part of the state. That’s because if the new casino winds up in Foxboro, it will mean a heavy concentration of the state’s gambling action in that part of Massachusetts. If all of the gambling houses end up along a southern axis in the state, residents in other regions might one day go north to potential casinos in New Hampshire instead. And, as UMass Dartmouth’s Barrow points out, the state’s goal is to spread the casinos out across Massachusetts.

The casino law gives the Mashpee Wampanoag the exclusive right to bid on a casino in Region C (assuming they can get a deal hammered out by July 31, which is no sure thing), but the tribe has yet to announce where it wants to build. Rumored spots like Bridgewater and Fall River are both close to Foxboro (25 and 40 minutes by car, respectively), and, because the state would have little choice but to accept where the Mashpee want to go, that could spell trouble for Kraft and Wynn.

Raynham Park and Plainridge Racecourse (in Plainville) are both leading contenders for the lone slots license. And very close to Foxboro. Plainridge is just 10 minutes by car, and Raynham Park is about 20 minutes. Plainridge owner Gary Piontkowski says he could begin work pronto thanks to the $5 million-plus he recently spent on planning and permitting. Meanwhile, Raynham owner George Carney says, “I think I’ve got the best location in the state,” citing nearby Route 24 and I-495.

With Mohegan Sun pitching a casino in Palmer and MGM Resorts proposing one in neighboring Brimfield, there’s a good chance the western-zone casino could wind up near the state’s southern border. And now that Hard Rock is signaling that it may abandon plans for Holyoke, the only other big player left out west is Ameristar, which is targeting Springfield — also, of course, near our southern border.

Developer David Nunes’s ambitions for Milford are a bit more modest than those  of his Region A rivals — the Foxboro and Suffolk Downs groups. He’s proposing a $600 million project, and would like nothing better than to play spoiler.

New Hampshire: Outgoing Governor John Lynch opposes it, but the state legislature is considering legalizing two casinos, which would likely end up right on our border. It may not be this year or even next, but it’s probably a matter of when, not if, Granite State casinos become a reality.

Maine: The state’s first resort casino is expected to open this spring in Oxford, and a slots parlor in Bangor plans to add table games.

Rhode Island: A November ballot measure will ask voters to add table games to the Twin River “racino” in Lincoln. Meanwhile, some lawmakers are also pushing for a new casino in North Kingstown.