What happens when a chef leaves his perch atop the New York food scene to run the family café — in Watertown? 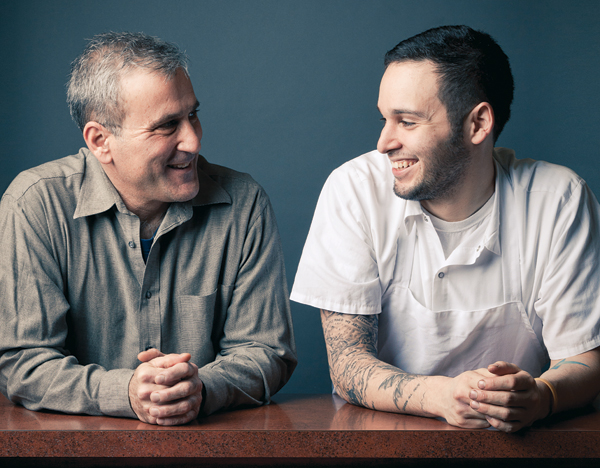 Tim Maslow expected some of the changes to his dad’s aging restaurant to be a tough sell: the baby octopus with smoked tomato, perhaps, or the pig-head toasts. But the primary offender turned out to be far more benign: his French fries.

Maslow’s dad had long served frozen Ore-Ida fries. In an effort to upgrade things, Maslow began hand-cutting potatoes and salting them to order. It was then that longtime patrons began complaining: “Your fries are delicious, but they reheat like shit.”

Such are the challenges that Maslow has faced since last spring, when the 27-year-old left a gig as chef de cuisine at Manhattan’s renowned Momofuku Ssam Bar to come home and take over a joint known for Greek salads and subs. But with a new team from Craigie on Main, UpStairs on the Square, and New York’s Gramercy Tavern, he’s done more than revive an old spot — he’s created a dining destination. Could Boston’s most exciting cooking really be happening in Watertown? At a place called Strip T’s?

Paul Maslow, Tim’s father, opened Strip T’s in 1986, after working a string of restaurant jobs at places like the Ritz. Finding that scene too stuffy, he ditched the city for Watertown, where he and his then-wife, Dorine, opened a sandwich shop serving items such as pita stuffed with steak and caesar salad.

He never expected his son to one day take over. The younger Maslow studied at the French Culinary Institute, joined the now-world-famous toque David Chang at Momofuku Noodle Bar in New York, and later moved on to Chang’s Ssam Bar. By early 2011, though, he was ready for a change, and rang up his dad. “I just threw this idea out there,” he says of his pitch to remake Strip T’s. “He was into it.”

The initial transition to chef and co-owner was rough. Father and son “were at each other’s throats,” Maslow says. Longtime staffers found the changes so frustrating that all but one, Evarado Alvarado, jumped ship. But Maslow forged ahead, reinventing everything from the burger (he added smoked miso and lemon aioli) to the cioppino (now cooked to order with fresh fish fillets) to the Bud-heavy beer list (now full of craft brews). “I didn’t even realize, until Tim changed the beer list, how far behind the times I was,” Paul Maslow says.

But thanks to the changes, success in the form of a dining room full of gourmands has followed. Paul Maslow has abandoned working the line — his favorite task — to tackle paperwork, but he’s energized by Strip T’s new direction. “The interesting parallel is, when I started here 25 years ago, my landlord said to me, ‘We’ll let you have the space, but this food is crazy for Watertown.’ It’s like we’re doing the same thing all over again: Will this go over in Watertown?”