Just in time for the grandkids, a Philadephia couple build their dream vacation home. It’s a mid-August morning in Boston, and the sun is already melting the pavement. But while the city cooks, two and a half hours west in Berkshire County a heavy mist is keeping the fields damp and cool. Mornings out here are slow, as cows, barns, and country roads tend to put the brakes on the 21st century.

For all these reasons and more, Meryl and Barry fell for this area three decades ago, back when they were still shuttling their children from Chappaqua, New York, to overnight camps in western Massachusetts. The native New Yorkers began renting Berkshire homes for a few weeks nearly every year, continuing the tradition even after they relocated to Philadelphia. Finally, with their little campers grown, married, and starting families of their own, the couple decided that a vacation house would help keep everyone close. “We always said that if we build it, the kids would come,” Meryl says.

In 2005 the couple decided that they’d start looking for land, but take their time planning a home. They found a 23-acre plot in Berkshire County — originally part of a 186-acre farm — just down the road from their friends’ house. It fit their desire for something “unpretentious, not grand,” Meryl says. “We knew we wanted meadow, and view was important, too. We imagined it to be farmlike,  but not exactly a farm. We didn’t want it to be too serious.”

While considering the property, they ran into Barry’s old college friend Lou Boxer, a prominent contractor in the region. Boxer, who had built several houses designed by the Williamstown firm Burr & McCallum Architects, encouraged Meryl and Barry to schedule a preliminary interview with the husband-and-wife design team. It was a good meeting, but the couple chose to stick with their original plan and put off construction temporarily. When they lost three friends in a single year, though, they began to ask each other, “What are we waiting for?” The project picked up speed from there. “Live now,” Meryl remembers repeating to herself. “This is our dream. Let’s do it.”

Overgrown with trees, rocks, and brush, the land lacked gorgeous views, but it had some height. Architect Andy Burr and his wife (and partner), Ann McCallum, began searching for local inspiration for the project, zeroing in on a grouping of old barns nearby. The three aging buildings framed a courtyard, originally designed to hold livestock. Though convenience and custom had dictated its dimensions, something about the farmyard felt right, so Burr and McCallum measured it, trying to pinpoint exactly what gave it that spatial magic.

Ultimately, Burr and McCallum decided to “scale it up a bit” for Meryl and Barry’s home, though they did make a central grassy courtyard the core of the project. They decided to locate the family’s complex against a pine-tree-covered hillside, running the driveway back behind the house so parked cars wouldn’t obstruct the view.

Because the land was all rock, Boxer had to do a lot of blasting to create a foundation for the house. Then he had to dig a well. “All the locals said, ‘If you want to find water, get Craig, a local dowser,’” Meryl says. “We followed him around with his sticks, and he told us where to dig and how deep.”

An L-shaped, two-story main building shelters two sides of the courtyard, while the smaller guest house anchors the opposite corner. The former includes the garage, the master suite, a couple of upstairs guest bedrooms, and an awe-inspiring dining/kitchen/living room. The kitchen boasts a long eat-in island with Ashfield schist-stone countertops, quarried about 50 miles away. At the far end of the room is a steel-clad “steam-punk” fireplace, which conceals a TV. Enormous sliding panels, also covered in steel and hung on barn-door hardware, can be used to create a more intimate dining room setting. A sheltered porch leads to the guest house, which has two bedroom suites and a lounge. Double doors open to a large pool and grill area.

Many pieces from Meryl’s tool collection can be found in the house: The incredibly heavy cart that doubles as a coffee table in the living room, for example, fit perfectly with the architects’ agri-industrial aesthetic. Their similarly inspired details throughout, like the big trusses and barn-board ceiling, tie the rooms together.

The couple’s plan seems to have worked. “It brought the whole family together,” says Meryl, who enjoys cooking for company using farm-fresh ingredients and watching the kids play baseball on the lawn. “I never get tired of going up there. As soon as we hit the Massachusetts border, the weight of the world is lifted.” Builder Lou Boxer’s team fabricated a raw steel fireplace enclosure that includes a compartment for wood and a TV cabinet. Linen slipcovers, a pieced rug, and a vintage watering can create a relaxed environment that’s perfect for playing board games or cozying up with a good book. The living room leads to a screened-in porch that overlooks verdant farmland.

A few of the couple’s many handblown pendant lights. The guest house was designed in a lighter, more whimsical palette. The view across the courtyard from the pool reveals how beautifully the home’s layout works with its setting. A collection of old printer’s stamps on a coffee table adds visual interest. 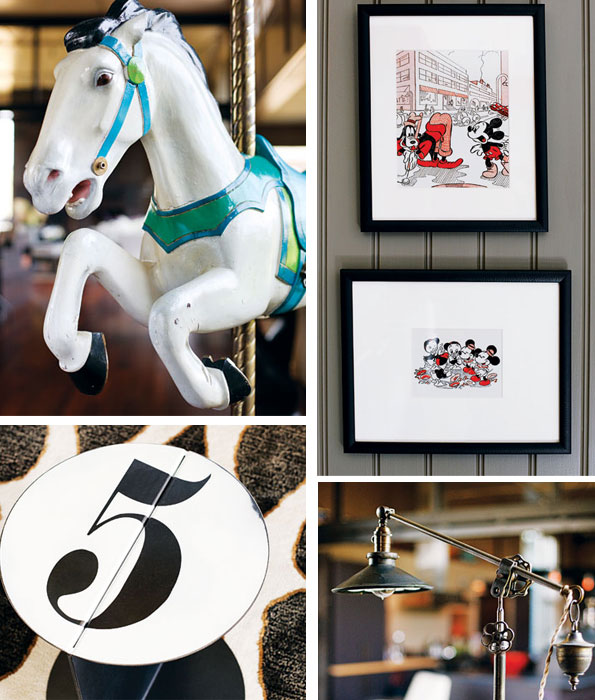 Details old and new create a unique setting throughout the home: A carousel horse stands guard at the entry; vintage Disney prints hang over the second-floor landing; a lamp built from heavy industrial parts creates a focal point behind the living room sofa; petite (but heavy) steel side tables, inspired by typewriter keys, grace the guest house.