The new manager of the Red Sox is brash, opinionated....and about to make them a hell of a lot more interesting, whether you like it or not. 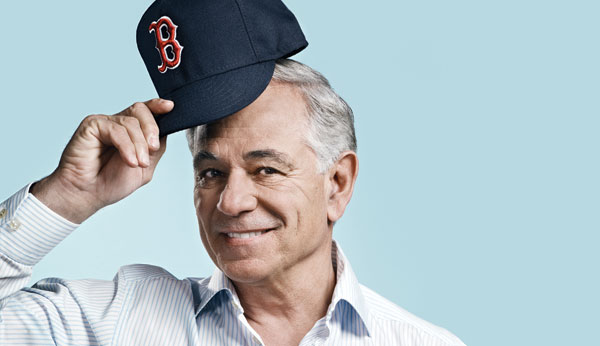 In the whirlwind of coming here, is there anything that’s surprised you?
Well, I’m still getting acclimated, so I’ll say that all life experiences are fun, and they’re the most fun when they’re new or they’re the best.

Have you gotten a chance yet to discover the joys of the Boston real estate market?
I’m trying to. I’ve only gotten to look at a few places. I haven’t had time, you know. I’d like to live somewhere close to the ballpark.

We’ll give the address so all the fans can come visit you.
Exactly, that would be something that I’d like.

How was it for you in New York? Everybody always says that people there leave celebrities alone when they’re walking down the street.
Really? I never really found that to be the case.

How do you think New York and Boston are different?
It seems like a greater part of the population here takes ownership with what I’m doing.

Have you had any interesting interactions with fans? Do people come up to you?
Everyone comes up to me. I guess I’m very approachable.

Has it been all positive?
I guess. I think right now I’m still in the honeymoon, so it’s been fun.

I ask because, going back to the way last season ended —
Maybe they feel like I wasn’t a part of what happened at the end of last season, so they’re giving me a bit of a break.

It feels like a level of cynicism, or anger, that we haven’t felt around here in a while has crept back into fans. Have you run into that?
Cynicism? No, I think I’ve run into true emotion. I think that true emotion is a good thing.

Fans seem to be lumping your hiring process in with the problems from last season. Everybody was speculating about the dynamics between Larry Lucchino and Ben Cherington — and who really made the decision. Have you heard from any fans who were skeptical about how that went?
Not one iota of any of that.

No?
Not from anyone, except for you. It’s the first time I’ve heard about skepticism.

Well certainly at your introductory press conference, it was something that people were asking about, right?
I guess. I don’t know. You know, again, everything that’s happening seems to be moving forward, and that’s where I like to be moving. And one thing you can’t do anything about is what happened in the past. Being as good as you can be in the present is what I think we all have to focus on.

How will your dynamic with Ben Cherington work in season, like if there’s a decision —
No idea.

No idea? Too soon?
I mean, I have an idea. We’ve worked together thus far [on] all decisions that have been made, and I think we’ll continue to work together. Why wouldn’t we? I don’t think he’s going to want to come down and talk about, in the seventh inning, a pitching change, and I don’t know that I’m going to necessarily want to know every thought he has. But I think we’ll be working together.

Yeah. Is that something you would talk with him about?
I would think so. I mean, not on a daily basis.

So who has the final say on that, if there’s a dispute?
Batting in the lineup?

Yeah.
I don’t think there’d be a dispute, but I would think I would get the final say. I bring the lineup out to the umpire.

Do you think you’ll be consulted on trades, that sort of thing?
Well, I have been so far.

Shifting a little, growing up in Stamford, Connecticut, were you a Yankees fan?
Yeah.

Is there like a ritual cleansing bath you have to go through for that?
No.

What made you want to stay in baseball after you were done as a player?
I love the game so much. I was doing other things, trying to make a living. I opened a restaurant. I led a lot of business ventures, but I always tried to stay in the game. So I was a roving instructor for the Padres, I was a roving instructor for the Mets, and I was a big-league coach for the Mets, and a few years before that I was a big-league manager for the Rangers.

You suffered a bad injury that really affected your career. After you got hurt, and spent more time as a utility player on the bench, did you start watching the game more like a manager would?
Yeah, that’s basically how it was. I always, even as a player, tried to watch it as a manager would. But when I wasn’t starting, I watched it more closely. And players would come to me for advice and tips, and I liked it. I was playing in one of those years — I guess 1976 — I was in the minor leagues in Hawaii, AAA, when the manager left because his wife was sick. He turned the team over to me to manage, so I got a little taste of playing and managing for a couple months. We actually won a championship, and I thought that was probably the route that I’d take.

When your name comes up on SportsCenter or wherever else, one of the first things that comes up is the mustache thing.
Yeah. I’m glad I did it. It’s something that’s brought a lot of joy and laughter to a lot of people, and it seems like they really thought it was meant to be a little light side of baseball. That’s a good thing.

So it doesn’t annoy you to always hear about it? You just think it was sort of fun?
Yeah, that doesn’t annoy me. The big thing was my players thought it was funny, and that was a good thing.

Having won a championship in Japan but not yet a World Series here, do you ever think about what your legacy will be when you’re done?
I might think about it when I’m done.

But not yet?
Why would I do that?

I don’t know, in a quiet moment of reflection, maybe.
I try to, you know, deal with today and look forward. I never think anything is done. It’s all part of the process.

I have to ask: Are you a fan of fried chicken? Do you have it at your restaurant?
We have wings. We have beer, obviously.

So do you have a favorite type? White meat, dark meat?
No, I don’t think I do. I like wings.

Do you go hot or mild?
You know, I like the wings at my place. I like them when they’re hot. Sometimes I’ll get them medium. Never do it mild.

Any chance of that happening in the future?
I don’t think so.

No? We can’t get you to, like, tweet out pitching changes during a game or something?
I don’t think so. I guess during the game we’re not allowed to do it, so I don’t think that will happen.

One other request: You’re an accomplished ballroom dancer and taught lessons before the games in Japan. Any chance we can get you to do that at Fenway?
I think everyone knows the cha-cha here.

When you were hired, lots of people said that it would only be a matter of time before you said something that would get you in trouble. Is that something you’re conscious of, or do you just go say what you say and do what you do?
Yeah, I say what I say and do what I do, and it’s an inevitability that someone — or many people — will decide that I say things that make headlines. That’s the way the world works these days, I guess. All 30 managers are in pretty much the same predicament.