Baseball isn’t the only thing that’s defined Fenway over the years.

FENWAY PARK. We know it as the playground of Youk, Manny, Nomar, Pedey, and Papi, and the time-honored domain of Tris Speaker, the Miracle Braves, Babe Ruth, Bobby Doerr, Ted Williams, the Impossible Dream, and baseball’s eternal sunshine boy, Johnny Pesky. What may come as a surprise as Fenway turns 100 this month, though, is that America’s oldest Major League ballpark has also been home to some of the greatest (and most colorful) non-baseball moments in Boston history.

[sidebar]For Fenway’s first 60 years, the park buzzed with nonstop action of every variety. From high school football games to FDR’s final campaign speech to the 1959 Boston Jazz Festival, it all happened here, at Boston’s very own people’s park. And then — it simply ended. From the early 1970s to 2002, Fenway was reserved almost exclusively for baseball. To understand why, you have to go back to the beginning.

The Red Sox launched their first season at Fenway Park on April 20, 1912, when Boston had two Major League Baseball teams and a nationally ranked football team at Harvard, but no other bigtime sporting activity save for the occasional boxing match. The park — named by then–Red Sox owner John Taylor and designed to fit in with the brownstones of the surrounding Back Bay and Fens — was built in a mere eight months. Just over two decades later, new owner Tom Yawkey reconstructed the facility during a remarkable seven-month stretch between 1933 and 1934, instituting a 24/7 c onstruction schedule after two major fires set progress back. Yawkey used union labor to complete the second-largest contracting project in Depression-era Boston, and in so doing became a local hero.

Decades later, though, Yawkey, his wife, Jean, and the Yawkey Trust would be responsible for an entirely different type of transformation at Fenway. It all started in 1968 with the collapse of Boston’s North American Soccer League franchise, which played its games at the park. Three years after the soccer goal posts were removed came the opening of Schaefer Stadium in Foxboro and the continued expansion of Boston College’s Alumni Stadium, developments that essentially eliminated the need for Fenway to serve as a multipurpose venue. At that point, the Yawkeys decided that there were few ancillary activities with enough revenue potential to justify the wear and tear on their baseball diamond. In fact, the 1973 Newport Jazz Festival and the 1999 Major League All-Star Game were the only really significant non–Red Sox events the Yawkey group would hold at Fenway over their last three decades as owners.

With John Henry, Tom Werner, and Larry Lucchino’s purchase of the team from the Yawkey Trust in 2002, however, the Fenway of yore began to make a comeback. The current owners have spent a quarter-billion dollars on renovations, and opened Fenway up to hockey and soccer games, concerts, daily tours, and other non-baseball events. In other words, they’ve returned the park to the people. Which is why it’s appropriate that, in honor of Fenway’s 100th year, fans can expect an unprecedented free open house on April 19, a soccer match in July featuring Henry and Werner’s latest acquisition, Liverpool FC, and a possible blockbuster political event (think big — as in presidential).

So to celebrate this, the birthday of the only Major League Baseball stadium that’s reached its centennial, we look back on the 100 people, moments, and events (in no particular order) that have defined Fenway Park over the past century — the good, the bad, and the monumental. 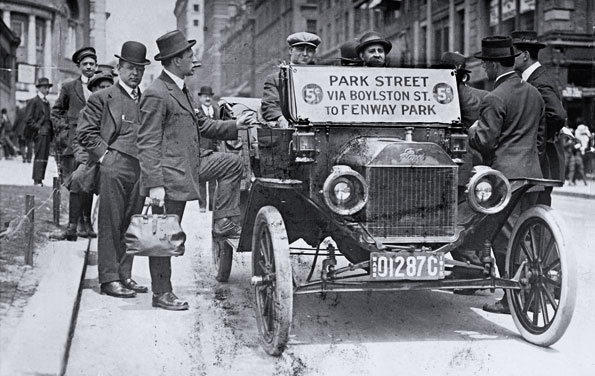 2. Thanks to blue laws and Fenway’s proximity to a church, the Sox were once banned from playing Sunday home games. The law was changed in 1932, three years after Revere officials tried to lure the team to their city with a 41,000-seat stadium.

3. In 1954, the Gaelic Athletic Association brought top-flight hurling to Fenway.

Richard Johnson is the curator of the Sports Museum and the author of 21 books, including Field of Our Fathers: An Illustrated History of Fenway Park. Additional reporting by Kimya Kavehkar. All photos courtesy of the Boston Public Library.