Shoestring spuds and onion rings have new competition on Boston's side dishes. 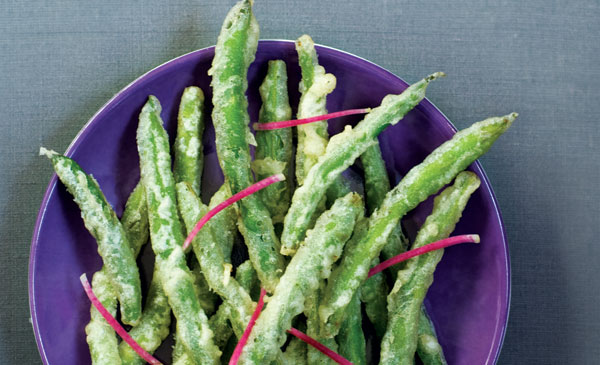 Shoestring spuds and onion rings have new competition: All manner of veggies are becoming must-order fried sides, from artichokes (Stella) to eggplant (Estragon) to mushrooms (the Salty Pig). At Scampo, Lydia Shire’s tempura-style green beans (pictured at top) are especially popular. “That’s what people want,” she says. “They don’t want vegetables that are too fussed over.” To that end, she’s also added fried zucchini sticks to the bar menu at another of her restaurants, Towne Stove and Spirits.

Bathing veggies in hot oil probably keeps them from counting toward your five-a-day, but that doesn’t seem to faze diners at Somerville’s Highland Kitchen. There, chef Mark Romano’s batter-fried, buffalo-style Brussels sprouts with blue cheese sauce have earned legions of fans. “I take them off the menu in the summertime, and we get a lot of complaints,” he says. This summer, though, he has a feeling they’ll stick around for good.