Why must a few lonely cranks decide the future of Boston's buildings? 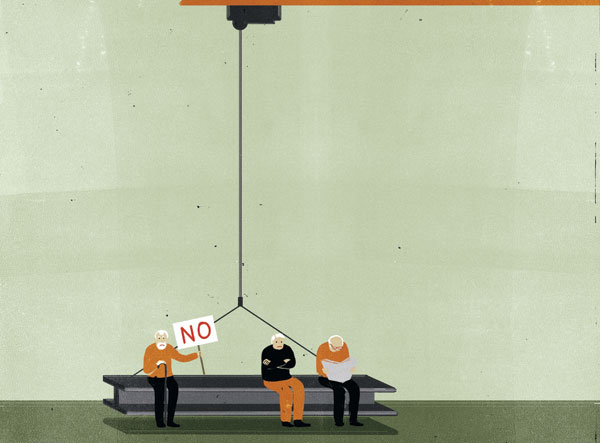 Ready or not, Boston is ramping up for another building boom. There are at least five major residential projects under review at City Hall, including ones for Stuart Street, Copley Place, Chinatown, the Seaport District, and the Fenway. Together, these proposals would add up to 1,400 new apartments and condos over the next few years.

This is good news for Boston. We need more housing to keep prices reasonable and attract young innovators. The bad news is that these projects aren’t in well-planned districts like the highly groomed South Boston waterfront. Instead, they will pop up on single lots throughout the city. That means that everything — from a project’s size to its location  and use — will be open to debate. Public debate.

What’s the problem with that? Well, as I write this, a chorus of naysayers is already warming up to protest these developments in the name of public virtue. These refuseniks aren’t interested in what you or I think is best for the city. They’re hell-bent on blocking anything a developer puts in front of them. Crazy as it sounds, in one of the nation’s largest cities, a few local characters who regularly show up at public meetings somehow have the power to completely derail major projects. This has to change. If it doesn’t, Boston could lose its competitive edge.

For those of you fortunate enough to have never been through this mess, a quick primer: Boston requires that every large-scale development proposal be approved by a citizens’ advisory committee — the members of which are selected from neighborhood groups big and small. This committee then spends inordinate amounts of time (often years) meeting monthly to debate the merits of the proposal. Sounds good in theory, but the truth is, only committed anti-development gadflies show up. Normal people have jobs and lives to live, and can’t commit to endless meetings. The best-known anti-development activist is Shirley Kressel, whose decades-long stance has been that only small projects are able to contribute to the city’s quality of life. Her opposition to almost everything is legendary. The root of the problem is that public review around here begins and ends with the assumption that the developers are against us.

So how did we wind up with this system? We used to have a top-down process, coordinated by professional planners who controlled the future of every neighborhood in Boston. These planners made micro and macro decisions based on what they thought was best, and you either loved it or hated it. But after the destruction of the West End in the late 1950s, the public wanted a way to control what got built, what got demolished, and what got left alone. Fair enough. But what started as democratized planning has now morphed into Kabuki theater, where those with political grudges and time on their hands have disproportionate influence over the city’s future.

What these curmudgeons agree on is that building height and developer profits will destroy our city. If you propose a 30-story building, the “public” asks, “Why not 20 stories?” It’s as though height is pure evil. In fact, height is often the measure of a project’s financial viability. In other words, the higher you build in this expensive, land-limited city, the more cost-efficient the venture. Chop off a few stories and, well, the project goes away.

So, you may ask, what’s the real harm in all this? Well, let’s remember the amazing projects that didn’t get built because the public-review process either took too long or demanded changes that destroyed the economics. Consider the ill-fated Columbus Center proposal, which collapsed for several reasons, not the least of which was community opposition to the project’s height. As a ruse, the review committee obsessed about the developer’s finances, asking to see the books several times. Alternative proposals were made, but essentially, the committee members just didn’t want a tall building and just didn’t want the developer making too much money. After years of filibustering, the project was abandoned. Then there’s the area around the TD Garden, which remains a wasteland for some of these same reasons.

But the saddest casualty of our twisted public process was the Boylston Square proposal back in the ’90s — a magnificent low-scale development by Millennium Partners that would have straddled the turnpike at Boylston Street and Mass. Ave., stitching the Back Bay together where the highway currently cleaves it. But according to the few “public representatives” who relentlessly fought it, Boylston Square had a fatal flaw: a 59-story, needle-thin tower that would have provided enough profitable square footage to pay for the costly low-scale development. The whole thing eventually died on the vine after years of controversy. Millennium, coincidentally, is the same team that brought us the new Ritz-Carlton that’s reenergized the old Combat Zone, and that will at last build a tower on the Filene’s site in Downtown Crossing. Just imagine what its Boylston Square project might have added to the city.

So what has survived this brutal and arbitrary process? The Mandarin Oriental Hotel and the Clarendon are two examples. They managed to withstand seemingly endless meetings because they were luxury proposals and the developers had deep pockets. The ultimate financial reward made it worth the time. Bottom line: high-end gets built; affordable projects that run on a tighter margin get killed by the protracted review process. You see, in the developer’s world, there’s risk and there’s uncertainty. Risk means you don’t know how your project will sell. That can be calculated. Uncertainty means you don’t know whether the public process will derail the project altogether. In Boston, uncertainty is immeasurable.

This must seem pretty good to those who think it’s in the public’s interest to prevent construction of any kind. If that sounds about right to you, then don’t complain when we’re saddled with prohibitively expensive condos or poorly designed ugliness built out of desperation rather than inspiration. And just ignore the huge holes in the urban landscape.

But we should strive for better, for the buildings we deserve and not the ones that can survive a flawed system.

When the School of Architecture at Northeastern University, where I teach, hosted a conference on the public process in April 2011, all the participants — developers, educators, planners, and architects — agreed that the system has devolved from its activist roots. And many of them, perhaps unsurprisingly, saw a solution in technology. If the city’s goal is true public participation, then let’s give everyone the ability to evaluate and comment on development proposals rather than just the few of us with time and an ax to grind. Instead of requiring attendance at months (or years) of meetings — like some kind of jury duty from hell — let’s move the process onto the Web.

A team of faculty at Northeastern is creating software that would allow an iPad user to see a digital model of a proposed streetscape. The viewer could thereby understand the exact consequences of the suggested construction. This simple app could radically change public review by addressing two of the biggest problems in the current system. First, people won’t be able to make up facts about the project — everyone will see the same thing. Second, the information will truly be public and available to all for comment, not just to a select, vocal few.

Whether or not the democratization of planning is a good thing, it’s our legacy. If we’re going to engage in this kind of participatory process, it’s about time we started doing it better. It’s only our future that’s at stake.