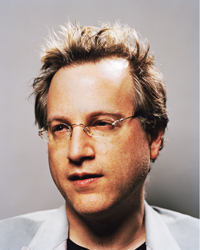 In the March 2008 issue of Boston magazine, we profiled Ben Mezrich as 21, the movie based on his bestselling novel Bringing Down the House, hit theaters. Despite the continuity problems, moviegoers seem to be happy with the result. The film has made more than $100 million since its release.

The good times have continued for Mezrich. The Globe reports today that two more of the author’s books have been optioned.

21 producers Dana Brunetti and Kevin Spacey have signed on to produce the film versions of Ugly Americans and the forthcoming Q. We spoke to Mezrich today, who said he’s currently working on polishing the screenplay for Ugly Americans.

“I write pretty visually, so it should go pretty well,” he said of his first foray into screenwriting. Mezrich hasn’t entirely abandoned the craft that made him famous—he says he’s working on a “top secret” project too.

No wonder Spacey told Boston that he “love[s] being in the Ben Mezrich business.” It’s still booming.