The Magna Carta Comes to the MFA Boston

The nearly-800-year-old symbol of liberty served as inspiration for the U.S. Constitution and Bill of Rights. Starting today, one of only four surviving copies of the historic document is spending its summer in a special exhibit at the Museum of Fine Arts. Sandra O. Moose, president of MFA’s Board of Trustees, and Rev. Philip Buckler, Dean of Lincoln Cathedral, examine the Magna Carta during a press preview for the “Magna Carta: Cornerstone of Liberty” exhibit on June 30. (Photo by Olga Khvan)

Starting Tuesday, one of only four surviving copies of the original Magna Carta is available for public viewing at the Museum of Fine Arts.

The landmark document was signed by British feudal barons in 1215 to limit the king’s power and protect their rights. It would subsequently become a symbol of liberty around the world and serve as inspiration for the U.S. Constitution and Bill of Rights.

The copy on view in Boston has traveled to the U.S. on loan from the Lincoln Cathedral in the United Kingdom and is the centerpiece of the MFA’s “Magna Carta: Cornerstone of Liberty” exhibit, which also showcases signature works from the museum’s Art of the Americas collection and other manuscripts on loan from the Massachusetts Historical Society.

“I hope that you will stand before it in awe and wonder at its age—nearly 800 years old—at its history, at its influence, but above all, the challenges that it presents to us today,” said Rev. Philip Buckler, Dean of Lincoln Cathedral, at a press conference held at the MFA on Monday afternoon. “It reminds us of the rule of law, the principles of justice to which we must hold, the freedom of religion, and the danger of unlimited power which needs to be regulated—all issues under threat in our world, not least as a result of terrorism and extremism. [They are] real issues for you here in the United States and for us in the United Kingdom and indeed for people all across our world today.”

Local politicians, including U.S. Rep. Michael Capuano and State Rep. Cory Atkins, were on hand to welcome the Magna Carta to Boston, as well as exhibit curator Gerald Ward, who also doubles as a state representative in New Hampshire.

I hope that you will stand before it in awe and wonder at its age—nearly 800 years old—at its history, at its influence, but above all, the challenges that it presents to us today.

Standing in front of Thomas Sully’s “The Passage of the Delaware” in the Art of the Americas wing, Rep. Capuano pointed to the unidentifiable people in the corner of the famous painting that prominently features George Washington.

“It’s about these people. The people forgotten by history, and yet the people who get benefits from things like [the Magna Carta]. I don’t know about you, but my ancestors would’ve been these people,” he said. “This document opened the door to equality. Everything we understand of human freedom comes from this document.”

Both Capuano and Alice Richmond, the deputy chair of a committee overseeing the Magna Carta’s 800th anniversary celebrations, thanked the MFA for the opportunity to reach out to its younger visitors.

“I’m hoping that this will be a fabulous teaching opportunity for all of us, but particularly for the next generation,” said Richmond, who collaborated with Rep. Atkins to secure the Magna Carta loan for the museum.

This particular copy of the Magna Carta first traveled to the U.S. in 1939, when it was exhibited at the World’s Fair in New York. Following the outbreak of World War II shortly thereafter, which made it too dangerous to transport the historic document overseas, it was taken to the Library of Congress in Washington, D.C., for safekeeping. Then, when the U.S. joined the war, it was temporarily taken to Ft. Knox before its return home in 1947, and has made several trips back to the U.S. since.

When the MFA exhibit closes in September, the Magna Carta will travel to the Sterling and Francine Clark Art Institute in Williamstown, Mass., and then to the Library of Congress to commemorate the 75th anniversary of its original trip there for safekeeping. In February, it will return to the U.K. for a special exhibit in London marking its 800th anniversary and the first time ever that all four surviving copies go on display side by side—a “family reunion” not to be missed, said Rev. Buckler.

“Please,” he entreated the people of Boston. “Look after it.”

“Magna Carta: Cornerstone of Justice” opens Tuesday in the Edward and Nancy Roberts Family Gallery at the Museum of Fine Arts, 465 Huntington Ave., Boston. It will remain on view until September 1. For more information, visit mfa.org.

Check out highlights from the press conference and a preview of the exhibit below: 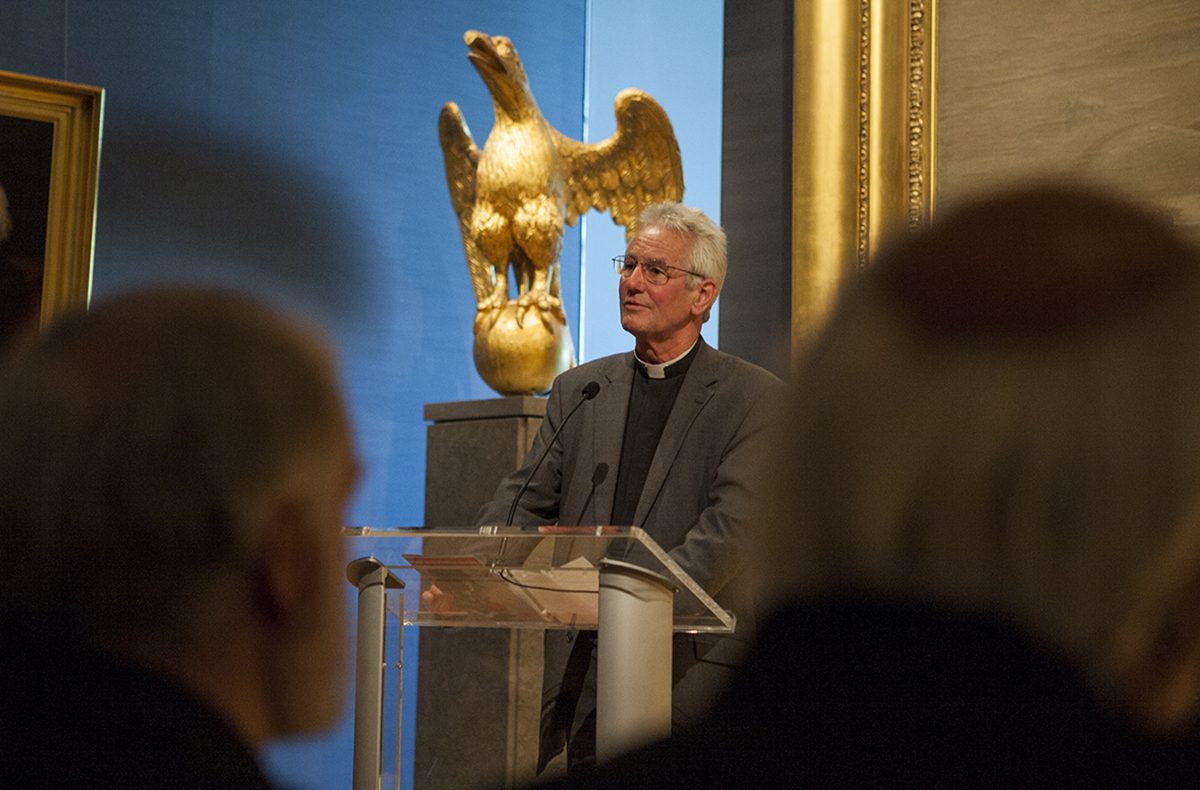 "Please Look After It"

Rev. Philip Buckler of Lincoln Cathedral gave a brief history of the Magna Carta's visits to the U.S.Photo by Olga Khvan 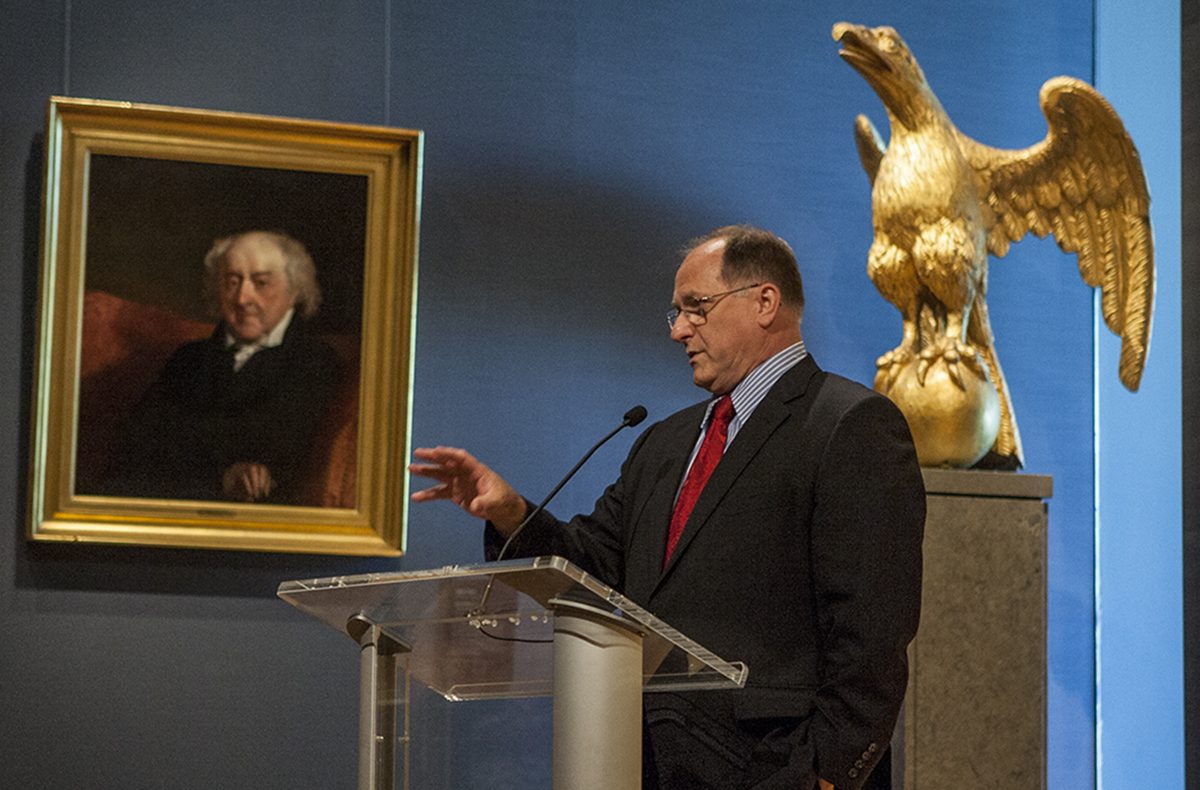 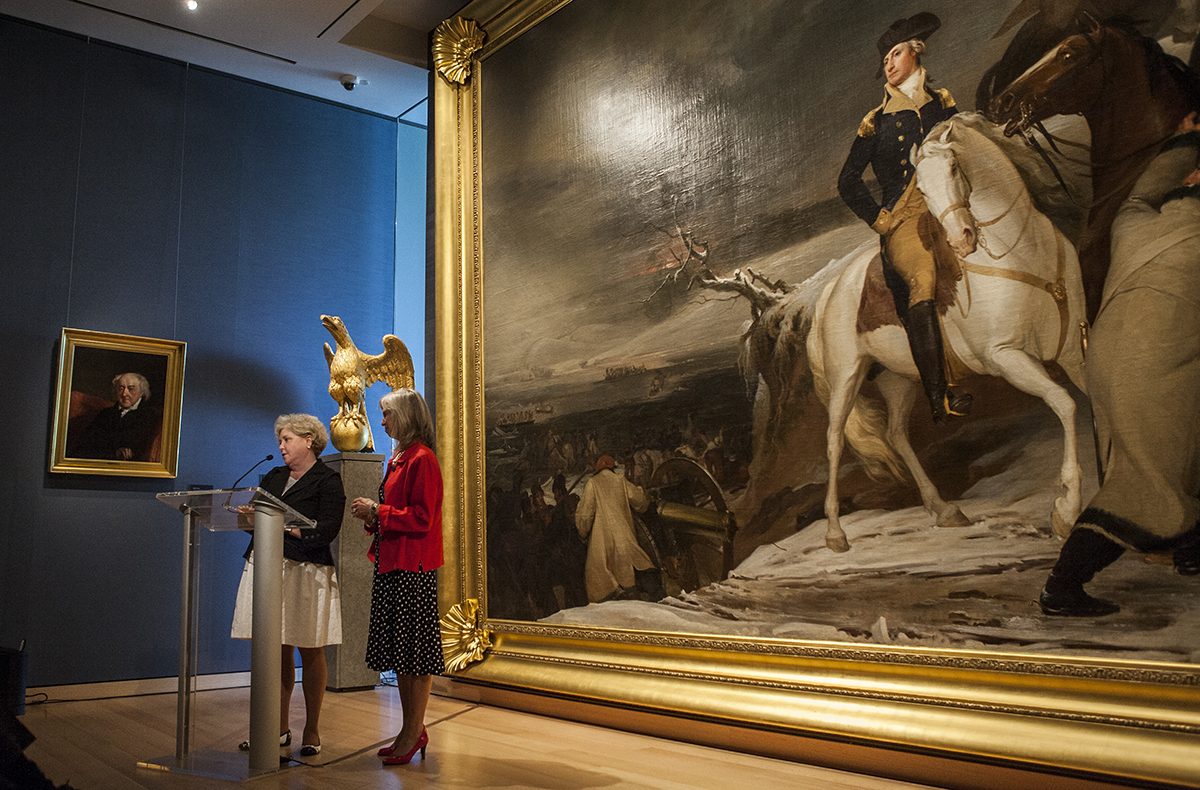 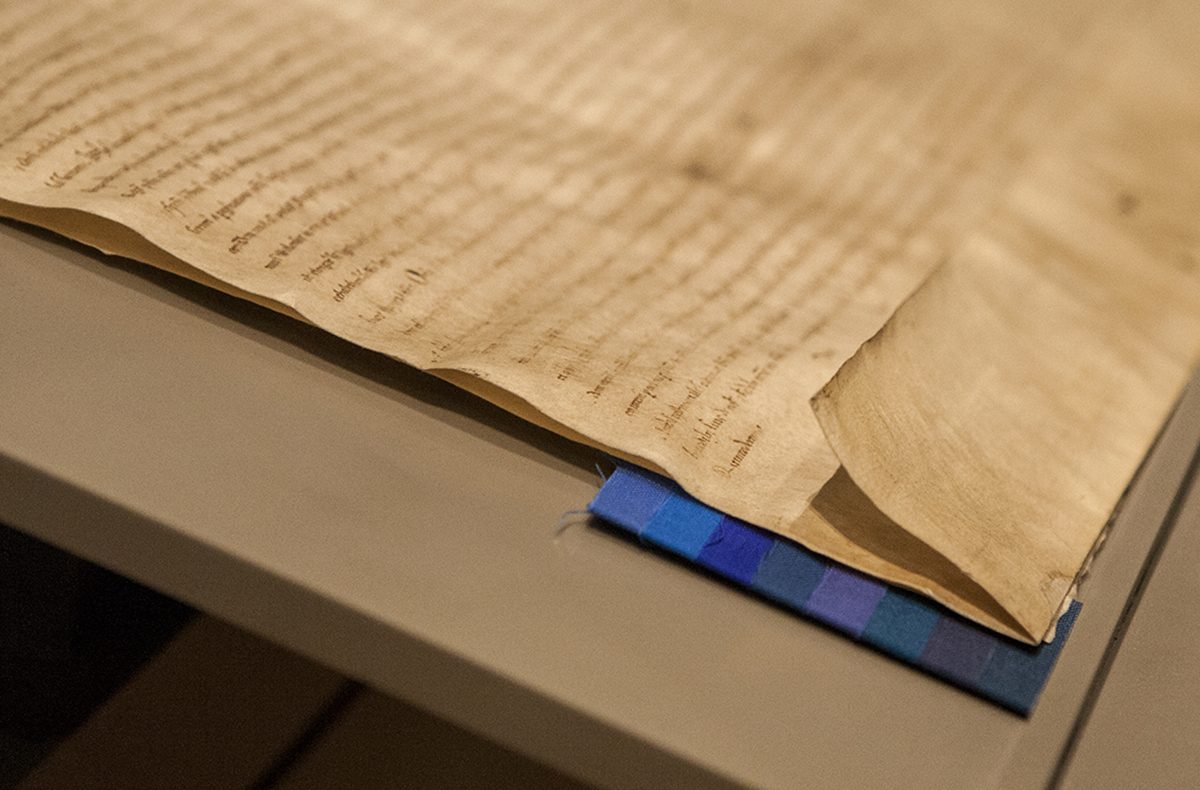 This wool card stays with the Magna Carta at all times, half covered and half exposed, to allow for monitoring of how much energy from light exposure has been absorbed while the document has been on view.Photo by Olga Khvan 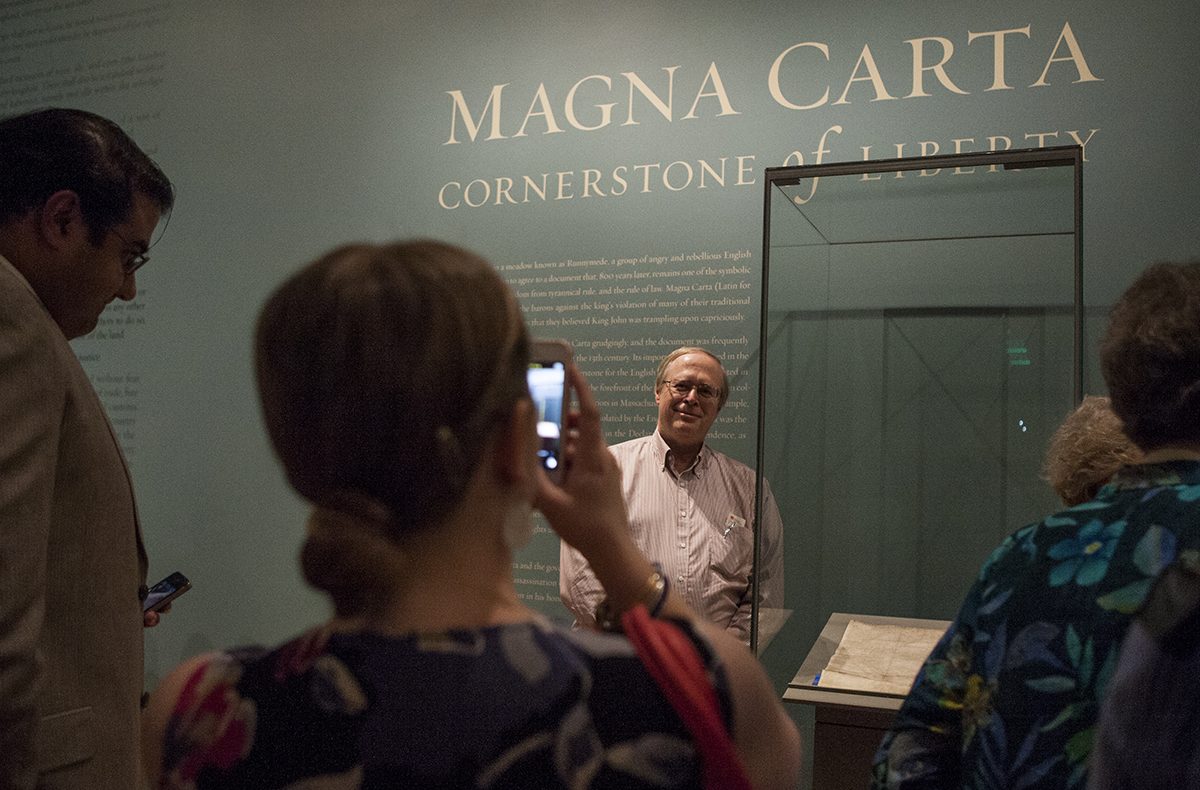 Visitors took photos with the Magna Carta at the preview.Photo by Olga Khvan 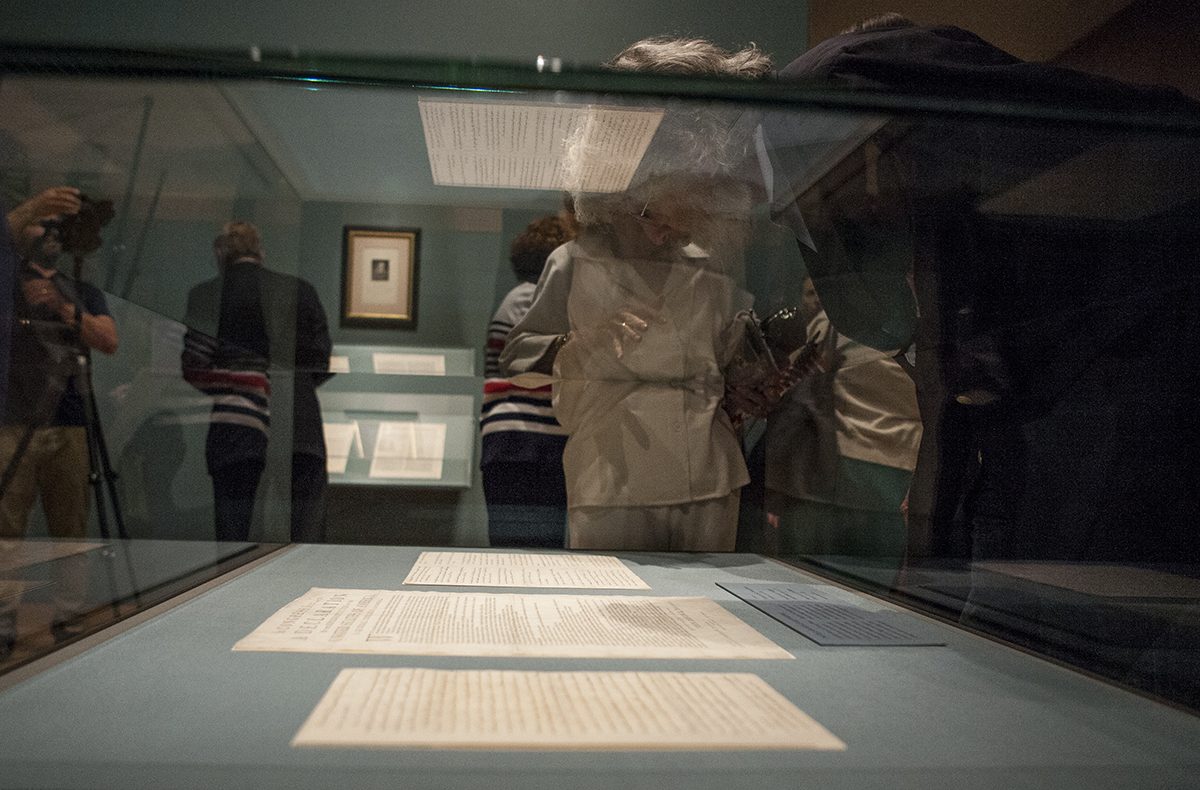 The MFA exhibit also includes handwritten drafts of the Declaration of Independence on loan from the Massachusetts Historical Society.Photo by Olga Khvan 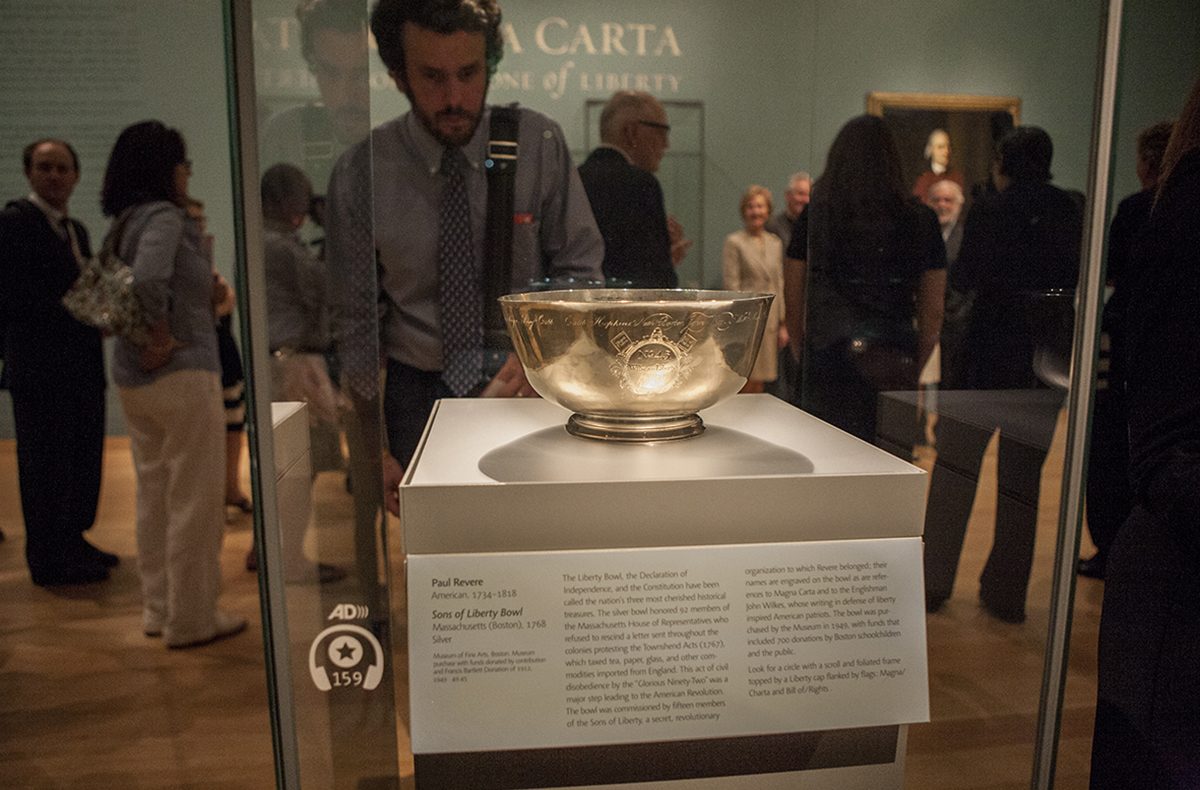 The 1768 piece by Paul Revere is one of the signature works from the museum's Art of the Americas collection on view at the exhibit.Photo by Olga Khvan 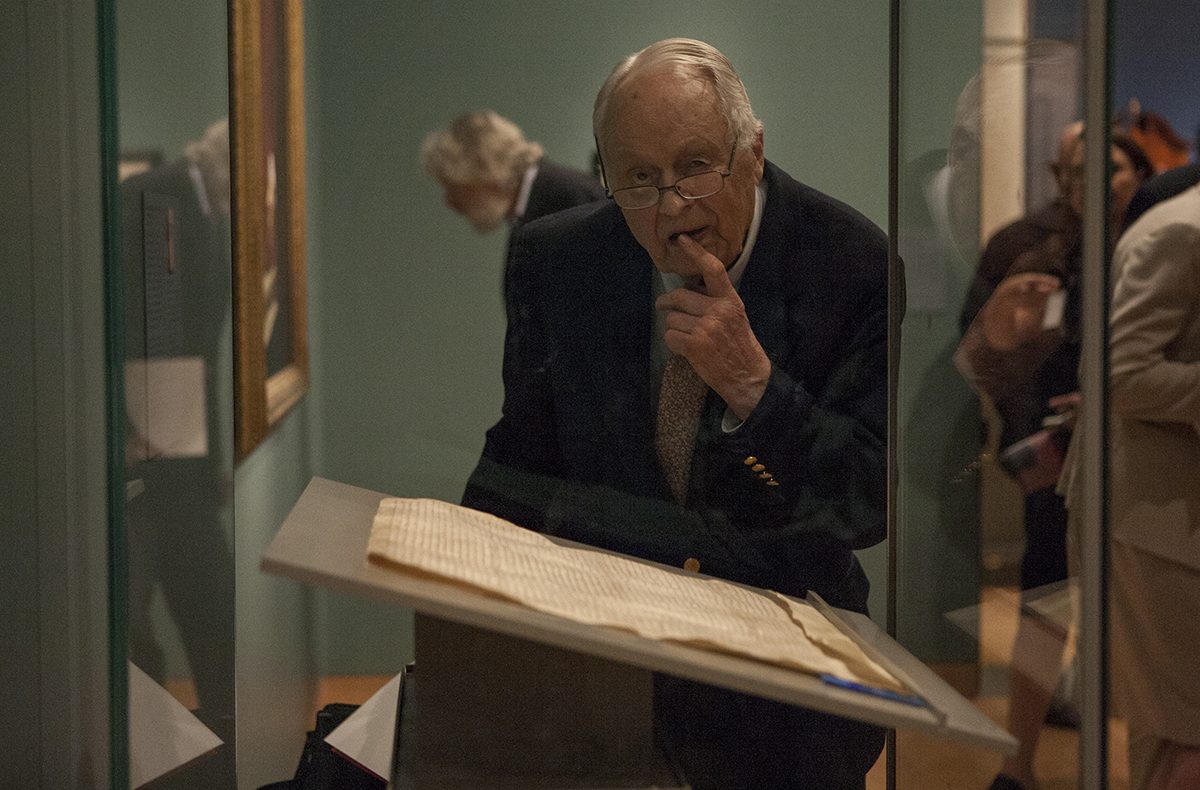 An MFA visitor closely examined the Magna Carta at the exhibit preview.Photo by Olga Khvan 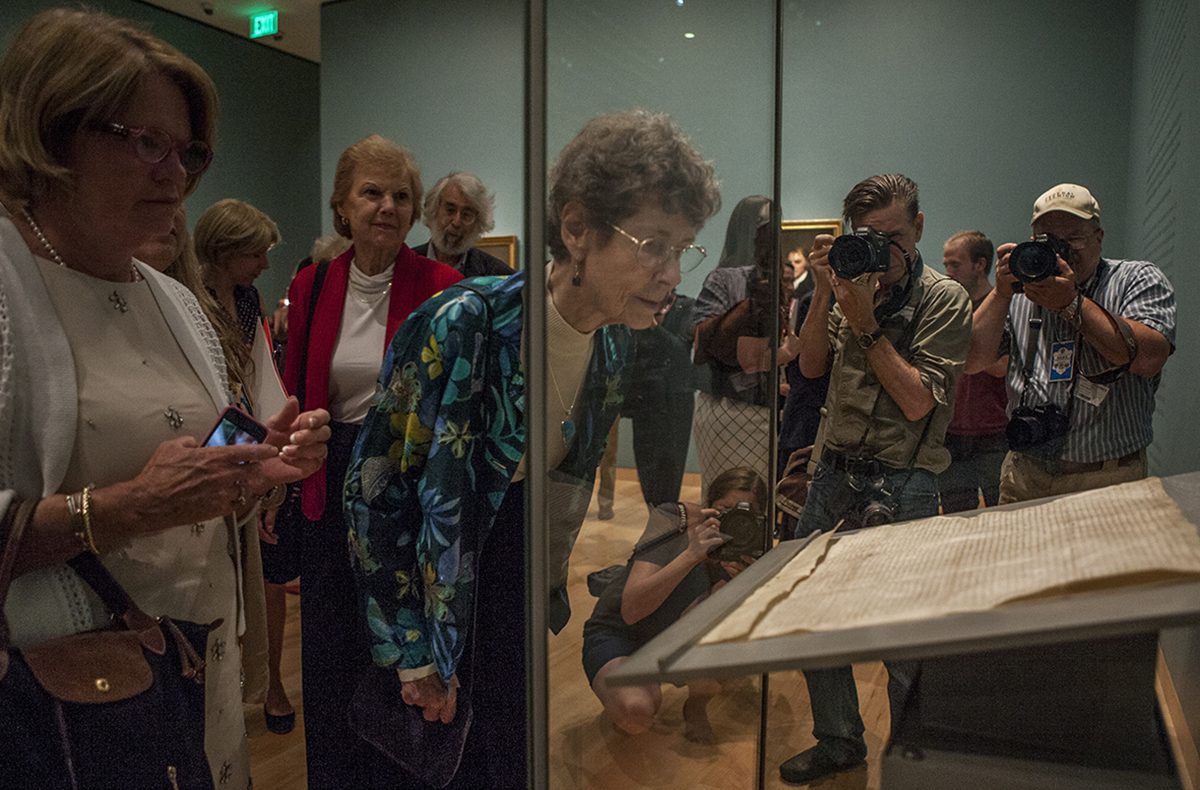 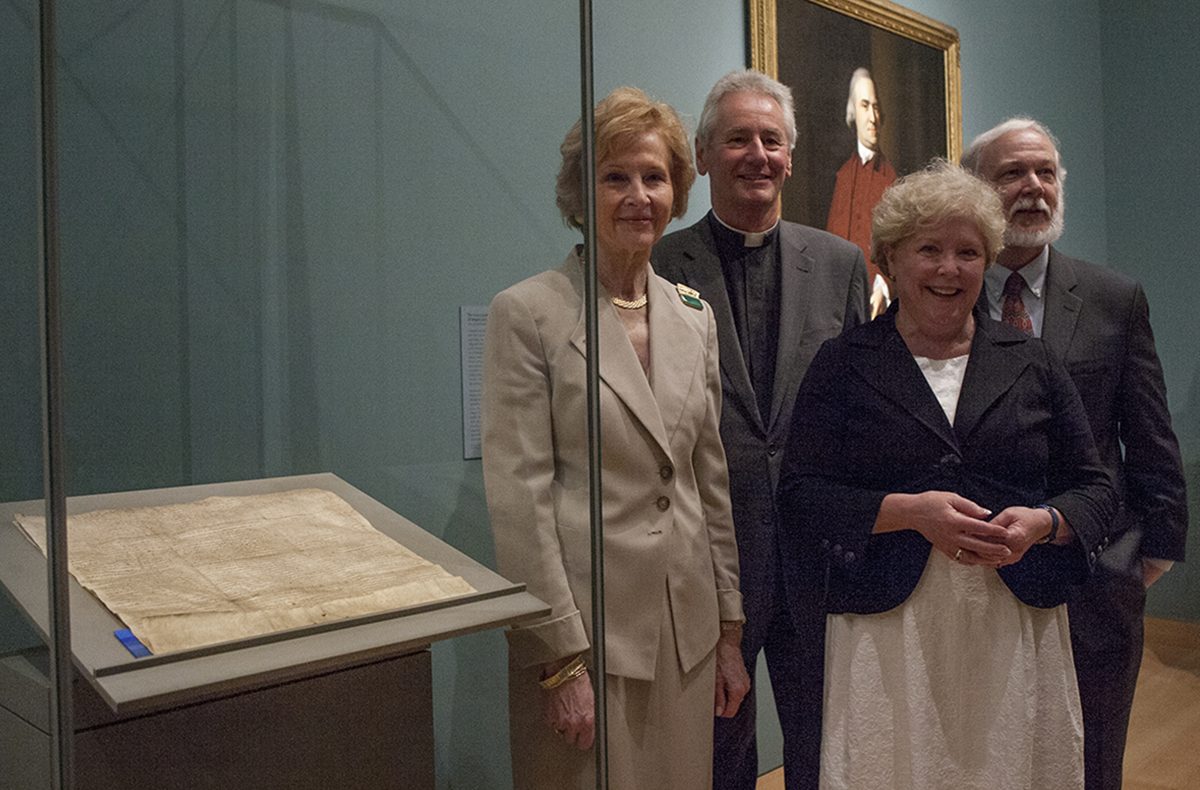