'Leonardo da Vinci and the Idea of Beauty' was organized in partnership with the Muscarelle Museum of Art, where it broke attendance records earlier this month. Head of a Young Woman (Study for the Angel in the “Virgin of the Rocks”) by Leonardo da Vinci / Courtesy of the Museum of Fine Arts, Boston

Beginning this week, visitors to the Museum of Fine Arts will have a rare chance to closely examine what is widely regarded as the most beautiful drawing in the world—a preliminary sketch for the female angel in Leonardo da Vinci’s famous painting “Virgin of the Rocks.”

“There’s a vitality to her that’s really arresting. It is exquisitely beautiful, but at the same time there’s a sense of verisimilitude, the feeling that you’re actually interacting with somebody—almost the way that you have that feeling with the Mona Lisa,” says Helen Burnham, curator of prints and drawings at the MFA.

The drawing’s appraisal as the most beautiful in the world traces back to Sir Kenneth Clark, a renowned 20th century art historian. “He even compared it with the finished version in the painting and found it much more lifelike and engaging,” says Burnham.

At the MFA, the angel acts as the centerpiece for an intimate exhibit of da Vinci’s drawings, whose opening on April 15 is scheduled to coincide with the Renaissance master’s 563rd birthday.

“One of the most important things to keep in mind about a drawing exhibition of Leonardo’s work is that he has so many more drawings. There may be 20 paintings by him still around, and there probably weren’t that many more during his lifetime, but he drew incessantly, and we have thousands of works by him,” says Burnham. “They’re very rarely exhibited, but they really provide a much greater sense of the workings of his mind than you get from the paintings even.”

“Leonardo da Vinci and the Idea of Beauty” comes to the MFA as a result of a continuing partnership with the Muscarelle Museum of Art at the College of William and Mary in Virginia. The two institutions previously collaborated on a 2013 exhibit of drawings by Michelangelo and a 2014 exhibit of paintings by Caravaggio.

In February, the da Vinci exhibit debuted at the Muscarelle, where it was organized by assistant director and chief curator John Spike. By the time it closed there on April 5, the exhibit had broken attendance records. Burnham expects that it will draw large crowds at the MFA, its second and final venue, as well.

While the team at the MFA made no changes to the exhibit’s checklist, which includes a number of loans from the Uffizi Gallery and the Casa Buonarroti in Florence and the Biblioteca Reale in Turin, made possible by Spike’s longstanding connections with Italian curators, they did reinterpret the exhibit with their own wall labels, graphics, and style of installation.

At the MFA, the exhibit is organized thematically within the Lois and Michael Torf Gallery. Inside the first section, visitors can contemplate da Vinci’s idea of beauty by comparing his depictions of the young and the old, male and female. The second section, which features the study for the “Virgin of the Rocks” angel, presents a more idealized, divine version of beauty. The highlight of the next section, which focuses on science and anatomy, is da Vinci’s “Codex on the Flight of Birds” manuscript, now widely believed to contain a hidden self-portrait of the artist, obscured by text.

“Now, you might be wondering how science and anatomy fit in with the theme of the exhibition, the idea of beauty. For Leonardo, observing nature is much more important in terms of coming up with an ideal beauty than copying the work of artists before him, or following some sort of established philosophy or ideal,” says Burnham. “He would much rather go by his own instincts and by observation of the world around him than by an established authority.”

But while da Vinci chose to depict things seen with his own eyes, rather than copying those who came before him, there were many artists who chose to emulate him. The exhibit features a number of works attributed to his students and followers, some possibly made in collaboration with da Vinci himself.

“That’s something that we’ve really highlighted in the exhibition, especially up here at the MFA—close looking for Leonardo’s hand, as opposed to the hand of his students,” says Burnham. “They vary in nuances, but are quite difficult to tell apart. You can sort of try your hand at attribution.”

Additionally, the exhibit invites viewers to compare da Vinci’s work with that of his greatest rival, Michelangelo. It features seven of his drawings, on loan from the Casa Buonarroti, which make up quite a significant portion of the 30-object checklist. Although both artists are known to have fostered a curiosity for anatomy and attended public dissections, comparison of their works shows Michelangelo’s greater tendency to take liberties with the human form in order to portray an ideal such as grace or power.

“With Leonardo, you really get a much more scientific eye, trying to stick to truth of what he sees,” says Burnham. “But on the other hand, he had this wonderful imagination. You do see a certain level of wit and intelligence and fantasy that he brings to whatever he’s doing.” 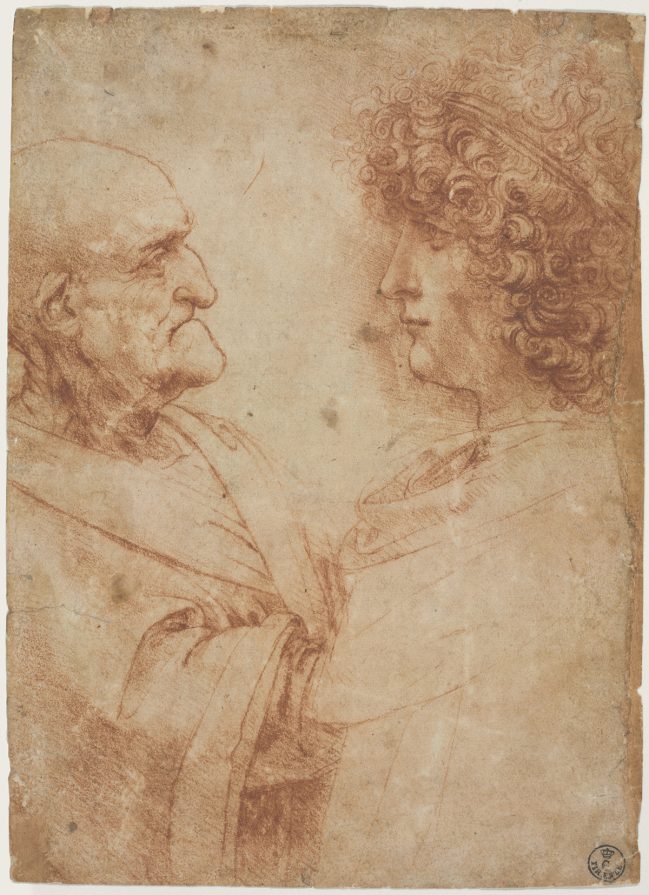 An Old Man and a Youth Facing One Another 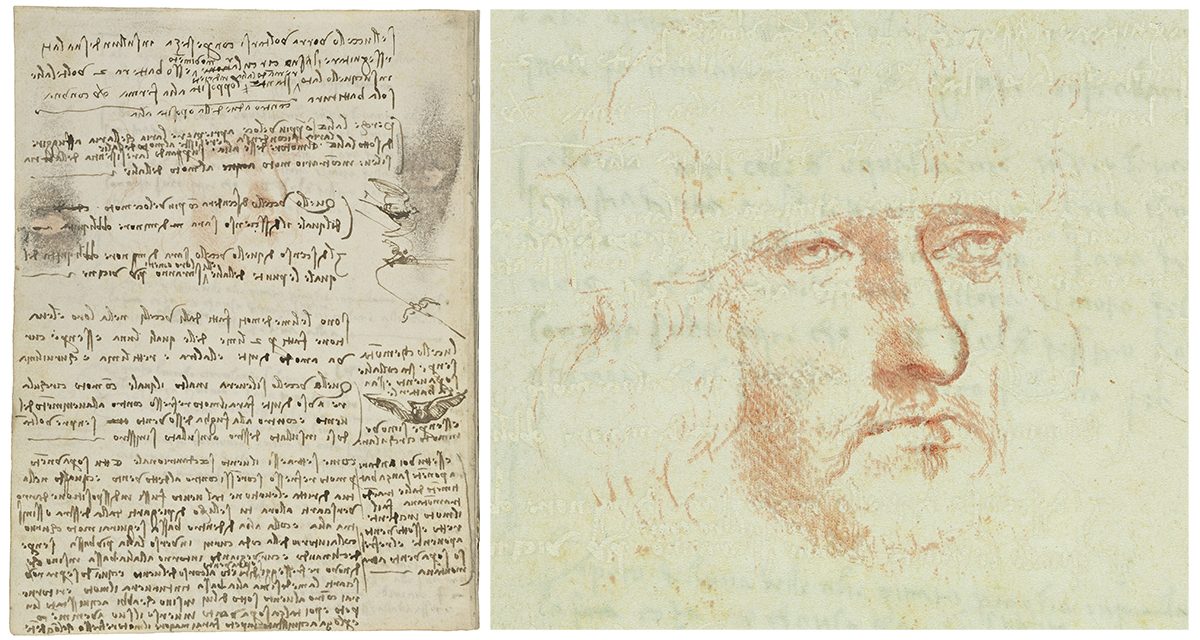 Codex on the Flight of Birds

On the right, an enhanced detail of the hidden self-portrait.Courtesy of the Museum of Fine Arts, Boston 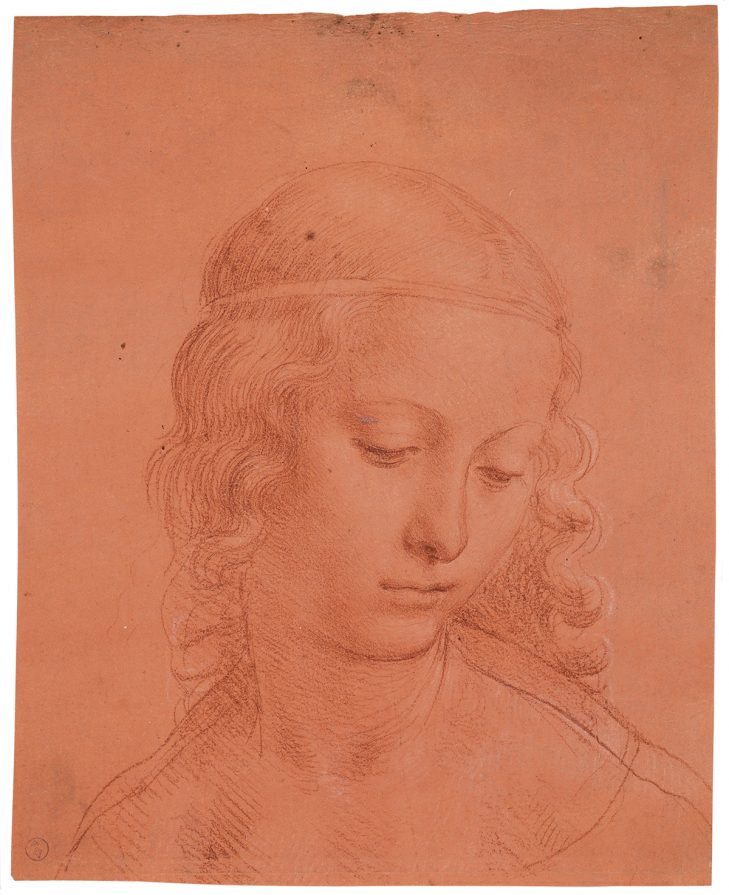 Head of a Young Woman

Attributed to Leonardo da Vinci and a follower.Courtesy of the Museum of Fine Arts, Boston 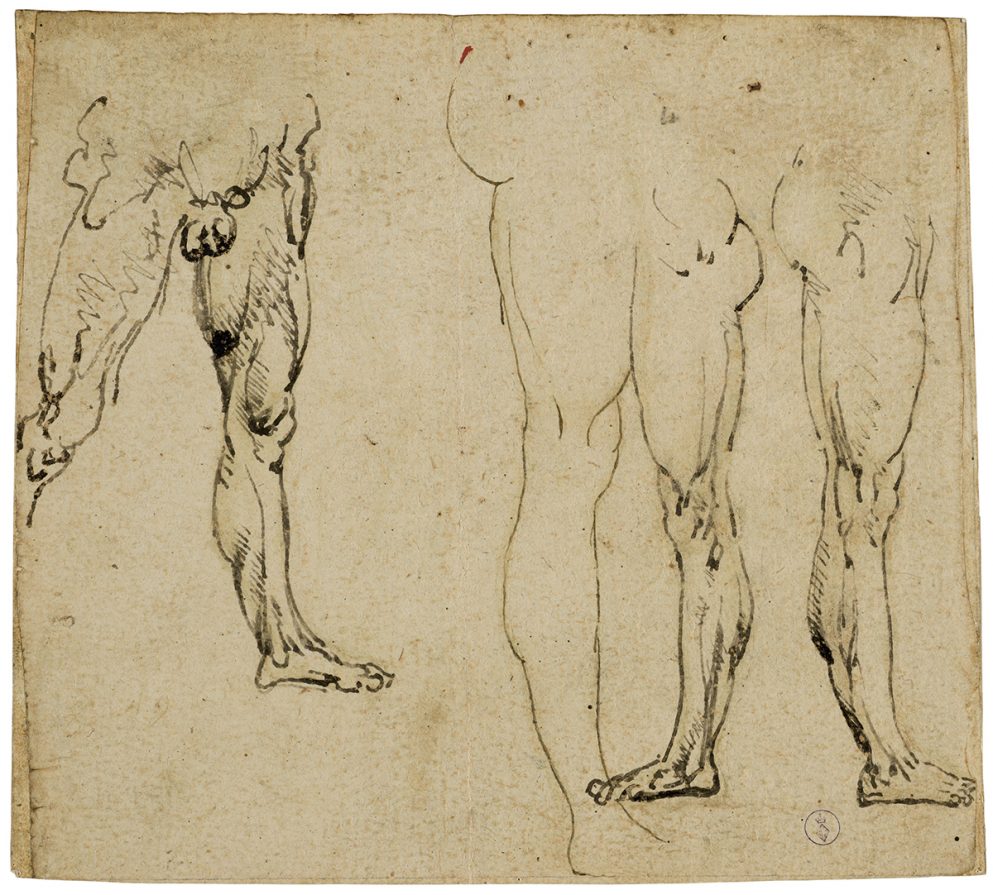 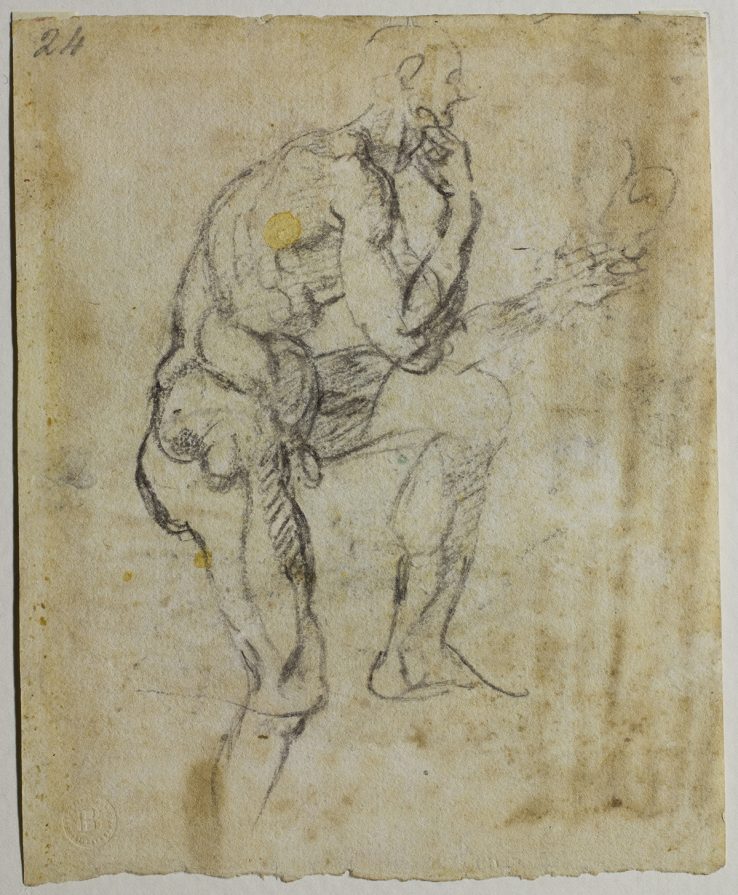 Study for a male nude by Michelangelo

“Leonardo da Vinci and the Idea of Beauty” opens at the MFA on April 15, and will remain on view through June 14. For more information, visit mfa.org.