Pro Tips for Watching the Head of the Charles Regatta

Where's the best place to see a wreck? What the heck is a coxswain anyway? (And other useful information.) A scene from the 2014 Head of the Charles Regatta. / Photo by Olga Khvan

There are fights. There are wrecks. There are moments of glory. The Head of the Charles is truly a sporting event unto itself. Whereas most rowing competitions follow a cookie-cutter format of six boats racing side by side up a straight, 2,000-meter-long stretch of water, this annual regatta pits teams against the clock as they wind and twist their way through three grueling miles.

“Imagine you were running a Nascar race through city streets,” says John Pojednic, coach of the Northeastern Rowing team. “It can be incredibly intense, at times chaotic.”

Here’s how to stay high and dry while getting in on the action. 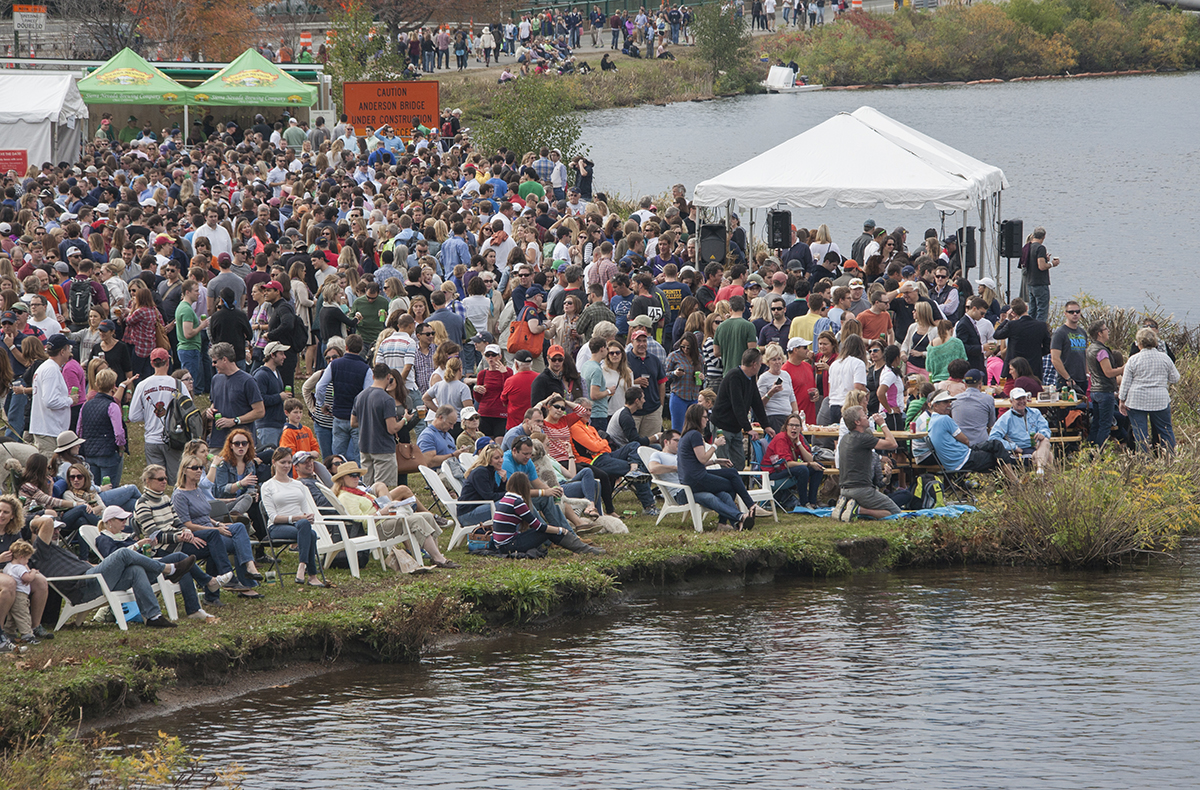 The Best Places to Watch the Regatta

Tempers are known to flare in this early portion of the course, which one coxswain described as “Clusterfuck Central.” Be on the lookout for calamity between actively racing teams and singles and doubles that are launching their boats in preparation.

To see one of the fastest portions of the course, post up in the “Powerhouse Stretch”, an approximately 1,250-meter-long straightaway that takes boats into the River Street and Western Ave Bridges. Top teams can hit upward of 15 mph if conditions are prime.

More interested in a cold brew and big crowd than the action on the water? Then head to Reunion Village on the Boston side of the river, between Weeks and Anderson bridges. Admission is $10 a day, or $15 for a weekend pass; kids under 12 get in free.

If you’re looking for a wreck, the best bet is to snag a spot on Elliot Bridge, one of the most difficult points for crews to navigate. It’s been the site of many confrontations and dangerous passes over the years, including an epic 2012 clash between the University of Washington and the US National team.

RELATED: Mile Guide to the HOCR Teams from Istanbul and Amsterdam in 2014. / Photo by Olga Khvan

The Role of a Coxswain

Few athletic positions are as misunderstood and derided as coxswains, those trim, compact, and ostensibly bossy individuals whom you see perched in the bow of the boat, barking commands at the crew. Truth is, though, a boat without a coxswain is like a racehorse without a jockey—powerful, but without direction and potentially destructive.

Coxswains shoulder heavy loads and are responsible for the safe passage of their boat and crew. “It’s a multifaceted tactician’s role,” Pojednic says. In addition to steering the boat, an exercise in delicate precision, coxswains are verbally setting the pace and motivating their teammates. At an event like the Head of the Charles, their role is all the more important as boats pile up around turns, and speedier teams need to find clear paths around traffic jams without breaking the boundaries of the buoys.

“The rule in men’s rowing is that the coxswain cannot weigh less than 125 pounds, which means the coxswain weighs 125 pounds,” Pojednic says. “They’re small in frame and stature, but very big in personality and heart.” Yes, the Cox Box® is a thing. / Photo via Wikimedia Commons

A Head of the Charles Vocab Lesson

Key phrases to drop to avoid sounding like a total noob.

Engine Room: A reference to the often-burly middle four rowers in an eight-person boat.

Cox Box®: A small device that amplifies a coxswains voice during competitions and collects data on timing and stroke rate.

Power 10: An order for rowers to deliver 10 of their most powerful strokes possible.

Hammer: A rower known for his or her power, but lacking grace and skill.

Hold Water: A command indicating to the crew to stop the boat.